Hello, my friends! Today I thought I would make a compliation post about some recent events in the Dollysphere that I thought might be interesting.

Firstly, I wanted to talk about something that is making a BIG impact. In fact, I first heard about it from my friends who have nothing to do with dolls. It is, of course, the recent “Rainbow Raver” LOL Surprise scandal.

Basically, as we know, LOL Surprise dolls are manufactured by a company called MGA, who also produce Lalaloopsy, Bratz, Moxie and Project MC^2 dolls, and let’s just say, they have a pretty hefty track record of getting into scandals (the whole Bratz vs Barbie lawsuit, the backlash over the excess packaging in LOL surprise dolls, etc.)

Anyway, one of the most recent ordeals is about the “Rainbow Raver” doll (shown below).

The image on the left is of influencer Amina Mucciolo, who is known for her fun rainbow clothing. And on the right is the Rainbow Raver doll, which was released three months after Mucciolo posted her outfit. Basically, Mucciolo claimed that MGA copied her hairstyle and general fashion for their own profits. She called out MGA and it was quickly picked up by social media.

Personally, I think it is obvious to see that they do look very alike.

Now, the CEO of MGA responded (who is a billionaire and known for being pretty racist), and oh my Lord, it was very unprofessional. Take a look for yourself!

The backlash was terrible and the story was picked up by several mainstream media outlets. MGA responded by further explaining that the “Rainbow Raver” doll was in production since September 2018 and showed pictures of the doll in development months before Mucciolo posted her hairstyle. They explained that it takes a long time to produce a doll and it would be impossible in only three months.

Whew! Personally, I think the doll looks very similar, but I don’t have a full understanding of the toy industry so I can’t really say for sure whether I think it was copied. What I do know is that Issac Larian should have definitely kept his mouth shut!

And here we have another scandal from MGA! (Don’t worry, MGA Stans, I’m not picking on you. I know that Mattel has had many, many more scandals in the past)

As you may or may not know, June is Pride Month, which is when all the companies try to capitalise on how woke they are. Sometimes this is good, because not only does it help to raise awareness, a lot of brands use a portion of their revenue to raise money for LGBTIQ+ charities.

However, sometimes it can also be bad, especially when its poorly executed or just done for show (like to say “look how woke and forward-thinking we are!” without making any meaningful contribution).

Bratz recently tweeted this picture (below) of two of their dolls to celebrate pride month.

But then, I realised that the dolls are not canonically LGBT. The bi flag and lesbian flag (see the pin and bracelet) are photoshopped. The dolls don’t actually come wearing these, it’s just been edited on for the post.

In the Twitter post, Bratz was called out for this because frankly, this kind of post makes no meaningful impact and is just done to “look good.” If the dolls were canonically LGBT, or if they had made any sincere contribution, it would be a different story, but they really didn’t do anything aside from jump on the bandwagon.

Mattel Stock Declines 24% Since The Beginning of 2020

Yikes. You read that right, that’s a 24% decline! The toy industry in general saw a 7.4% increase in sales for the first quarter of the year, but Mattel saw a 14% decrease. Not good! Mattel really hasn’t had a very good track record these last few years, have they?

It’ll be interesting to see how they’ll go into we move further into the 2020 recession. Read more here.

This is a new doll line from MGA. Each rainbow doll represents a different colour of the rainbow (duh). The premise is a “a colourful fashion school where everyone learns to flaunt their true colours.” (Hmm. Okay.)

Personally I think this line will not last very long. The dolls themselves are really cute and they have a lot of cool fashions, but I feel like the overall premise of Rainbow High is a bit simplistic. However, coupled with a cartoon Netflix mini-series and accompanying pets (we all know doll lines seem to really love accompanying pets), perhaps it might take off.

And here’s the yellow girl, Sunny Maddison. I won’t put the rest – you get the point.

I have a few new interesting tidbits in regards to the new Barbie film, Princess Adventure.

Firstly – we know one of the songs will be called “Try It On.” I assume that will be played in the scene where Barbie is learning how to be a princess and whatnot (Barbie movies are a lot of things, but unique is not one of them).

Secondly – we know the film will be released on Netflix. I assume this will be akin to Barbie Dolphin Magic, where originally it was exclusive to the US, and then later released internationally.

Thirdly – we now know the plot! “Barbie and Princess Amelia look exactly alike! Barbie admires Amelia’s royal life, and the Princess wishes she could be carefree like Barbie. So they decide to trade places for a day. But when the princess disappears, will Barbie be able to save her?”

Wow. That is… very creative. Not. 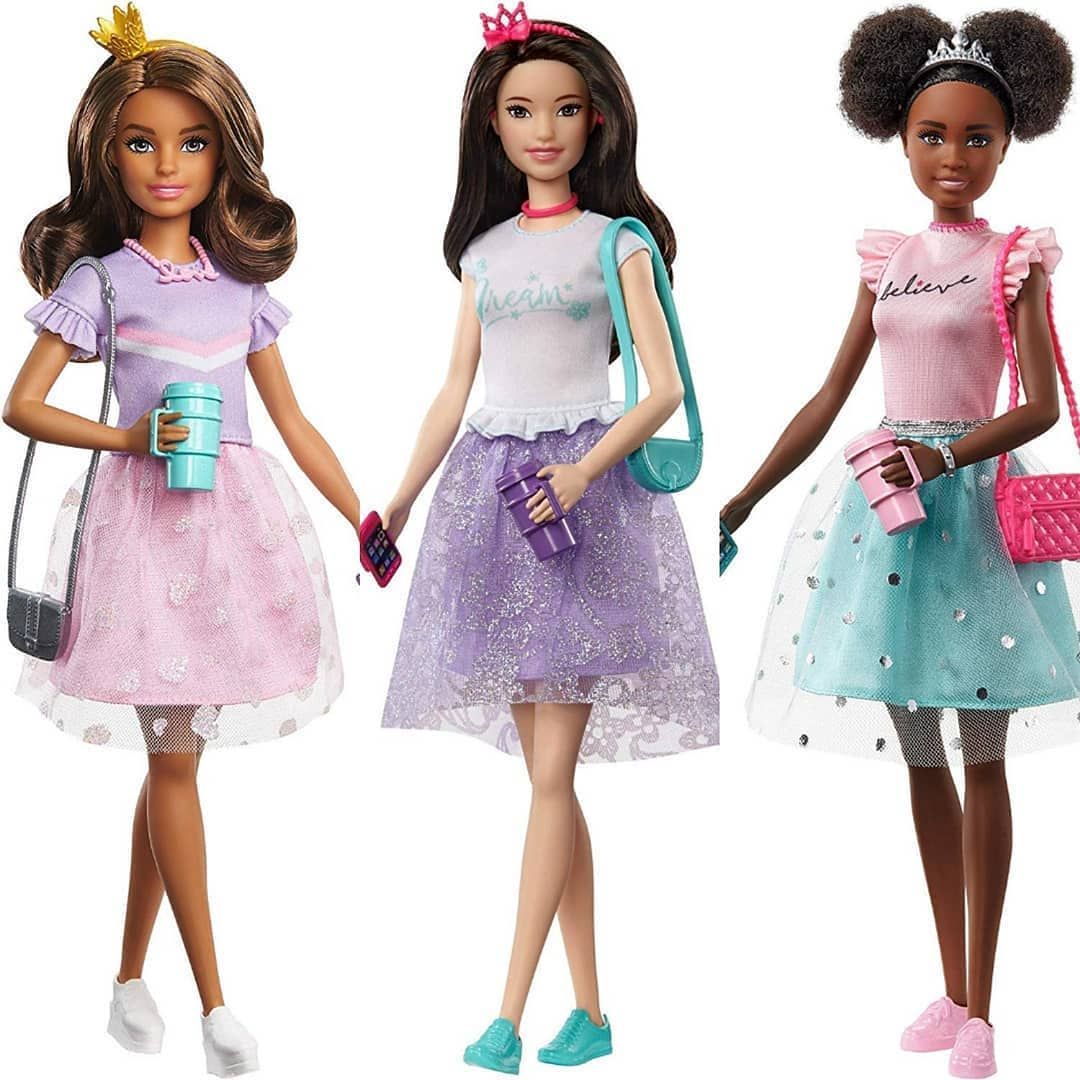 Personally I don’t understand why Mattel insists on making these tired movies with overused storylines. They have such a HUGE brand presence, a pretty big budget and the ability to make a film that is actually good! But yet they keep settling for the same “ordinary girl and princess swap places!” trope, over and over again!

It is tiring. The same thing could be said for the dolls, too. We all know that Mattel is capable of making really cool, unique Barbie dolls with awesome articulation, funky hairstyles and interesting facemoulds – yet they produce millions of the same blonde, closed-mouth Millie with zombie arms and bland, screen-printed dresses.

WHERE IS THE CREATIVITY! If I had this much money, ya’ll know I would make something much better.

The 2020 election is nearing (which I’m not sure is a good or a bad thing), which means the 2020 Barbie for President dolls have been revealed! There will be four new dolls in the campaign team.

And that’s all my news for today! If you know anything interesting please share in the comments!