Barbie in the 12 Dancing Princesses (2006), is one of my favourite Barbie films ever. It is my #1 most-watched film, and I know all the lines.

I know what you’re thinking -“Holly, that’s impossible. You can’t possibly know all the lines!”

Trust me, I kid you not. I take these things very seriously!

The film is set in a beautiful kingdom, surrounded by lush green mountains and forests. The main character, Princess Genevieve, is one of the 12 sisters heir to the throne. Genevieve is kind, clever and quick-thinking; everything you could want in a fairytale princess.

One of my favourite things about this film is how the film depicts the characters as individuals, rather than carbon-copies of one another. This is communicated to the audience not only by their style of dress and their hobbies, but also their use of language. For example, the eldest, Edeline, is always watching over her younger sisters and making decisions. For example, she is the one that finalises their decision to leave the kingdom. 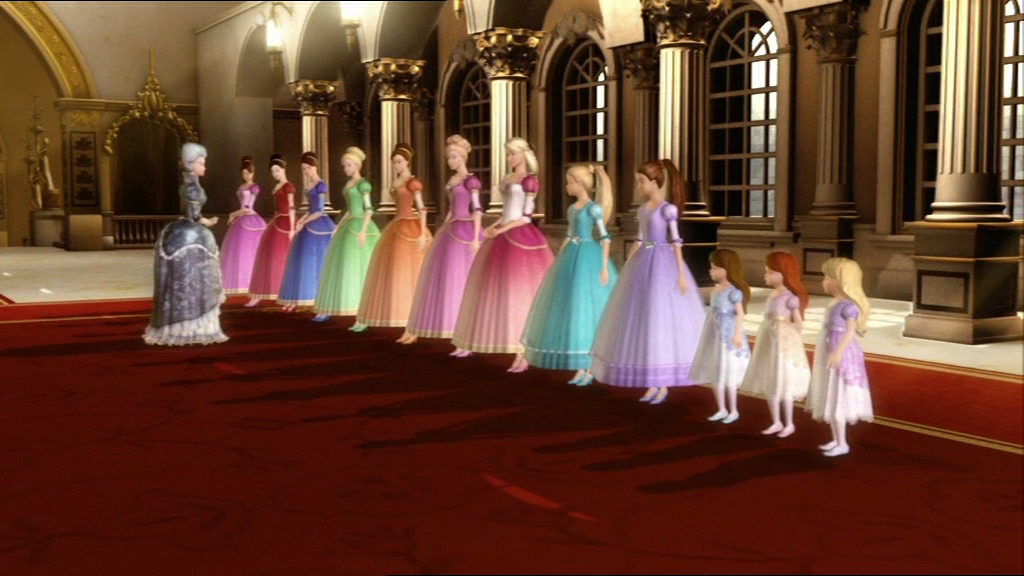 The twelve sisters are merrily living their lives -dancing, singing and playing in the castle, until the king’s cousin Rowena wanders into their lives. Their father, King Randolph, has invited Rowena to teach the girls how to behave as “proper princesses.” He is worried about their reputations, as the girls’ unladylike behaviour is the talk of the kingdom.

Despite the king’s best intentions, Rowena turns the girls’ lives upside-down. She  takes away their things, makes them wear dull grey clothes and forces them to clean the castle. 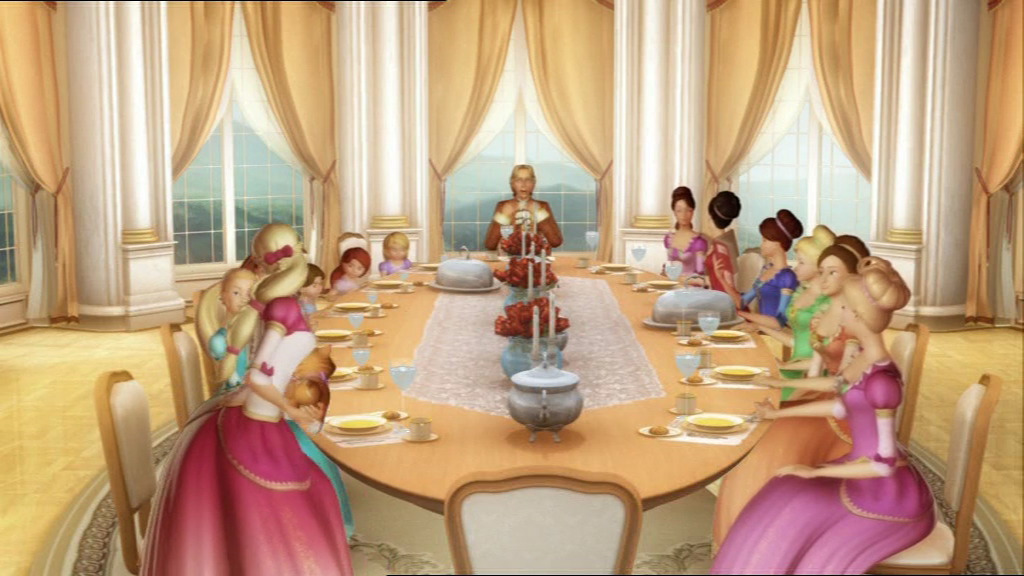 The sisters find solace after they discover their late mother’s secret -their bedroom is a gateway to a magical dancing world! Secretly, the girls spend their nights dancing at the pavilion, finally free from Rowena and her nasty rules. 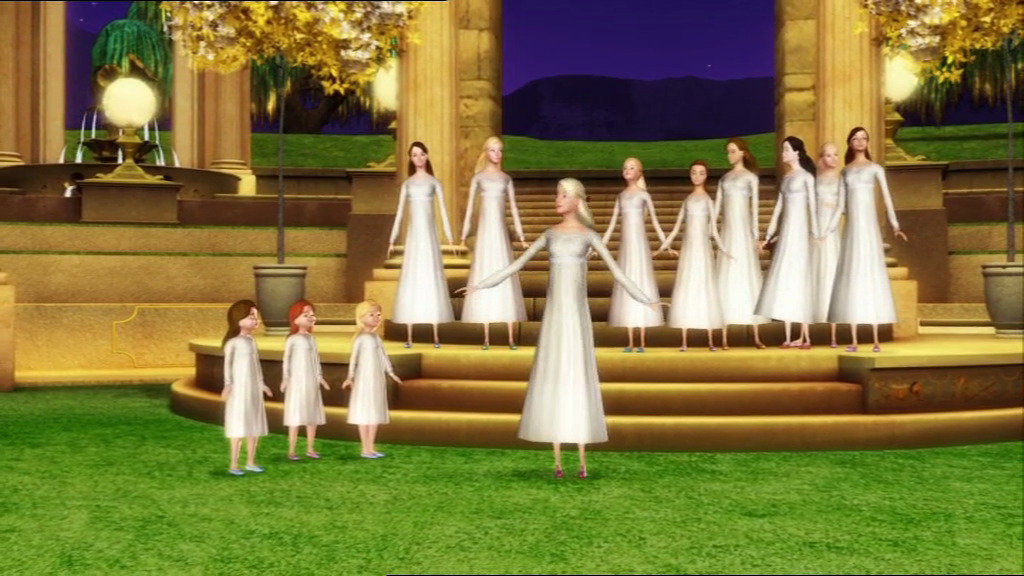 Meanwhile, Rowena is secretly slipping poison into the king’s tea, who is slowly getting weaker and weaker. Despite being from royal heritage, Rowena is single, poor and grumpy. She wants the throne, and she’s going to do everything in her power to get it!

Rowena manipulates the girls into thinking the king doesn’t want them around anymore, and they run away to stay at the pavilion. 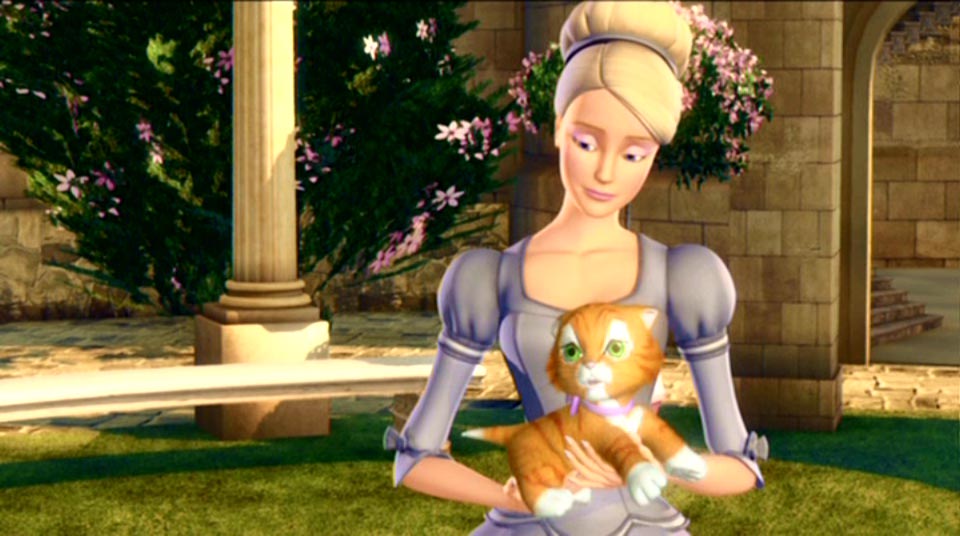 Rowena convinces King Randolph to hand over the kingdom to her, and dies shortly after. After discovering things back in the kingdom have gone haywire, the girls return to the castle and Genevieve, our main character, battles against Rowena! Genevieve is victorious, and the sisters save their father using some magical water they collected from the pavillion. 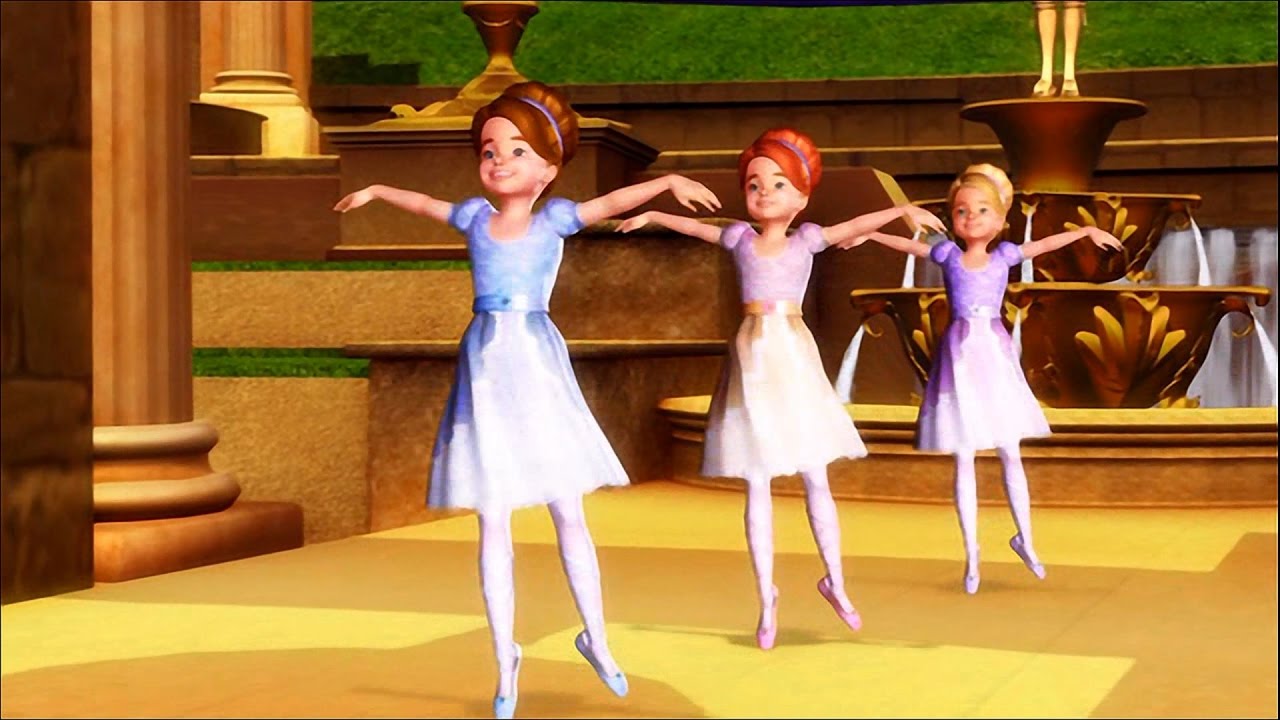 The music is really good. Like, really good. There are a variety of different songs in this film (all but one are instrumental), and they all are very uplifting and really lovely to listen to. The film’s theme song “Shine” is sung by Cassidy Ladden, who is also known for her songs in Barbie and the Diamond Castle and Barbie as the Island Princess.

“Shine” was nominated for the most “Outstanding Original Song” in an animated film -funny, you don’t see many awards for Barbie movies nowadays! They used to win lots of awards. Anyway, the song is really lovely and has a really inspirational message. 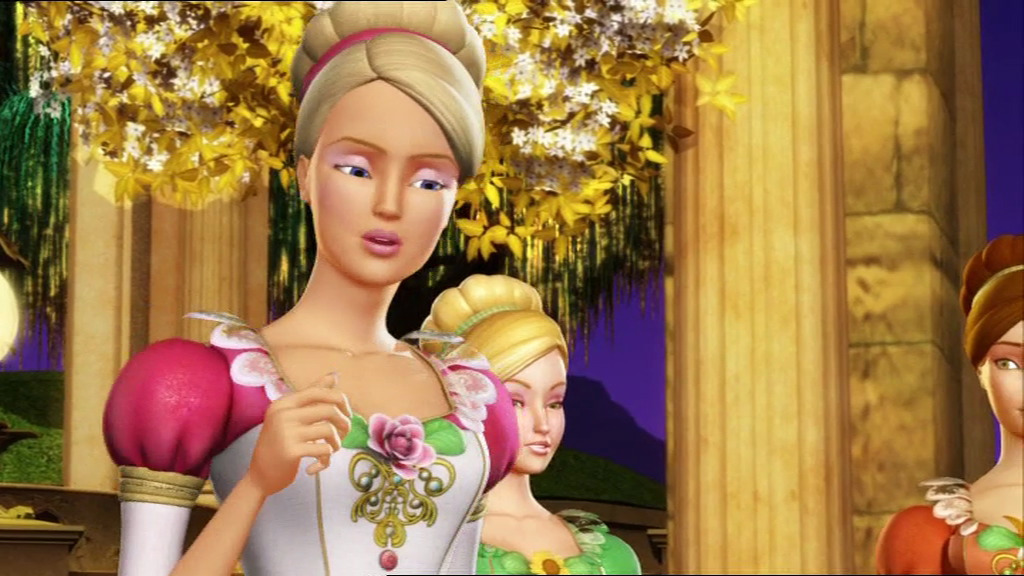 The dancing is really good. I find it interesting when people in the Youtube comment section say “the dancing is so unrealistic! It’s so bad! Real dancers don’t do those sort of things!”

Well, here’s a surprise for those people: The film’s dance scenes were literally motion-captured by professional ballerina Maria Kowroski from the New York City Ballet. Like, they are in no way “unrealistic” because they were literally done by a principal dancer and choreographed by a whole team of people.

I digress. The dancing is really good, and when I rewatched this film, it reminded me of why I started taking ballet lessons, and how beautiful ballet is.

However, I think there is one point (when the sisters are dancing at the pavilion) where the triplets dance en pointe. This is painfully unrealistic and would never happen in real life, because you definitely do not start pointe at five years old! This normally happens around eleven or twelve (Hadley and Isla’s age). It might have just been an animation mistake though. 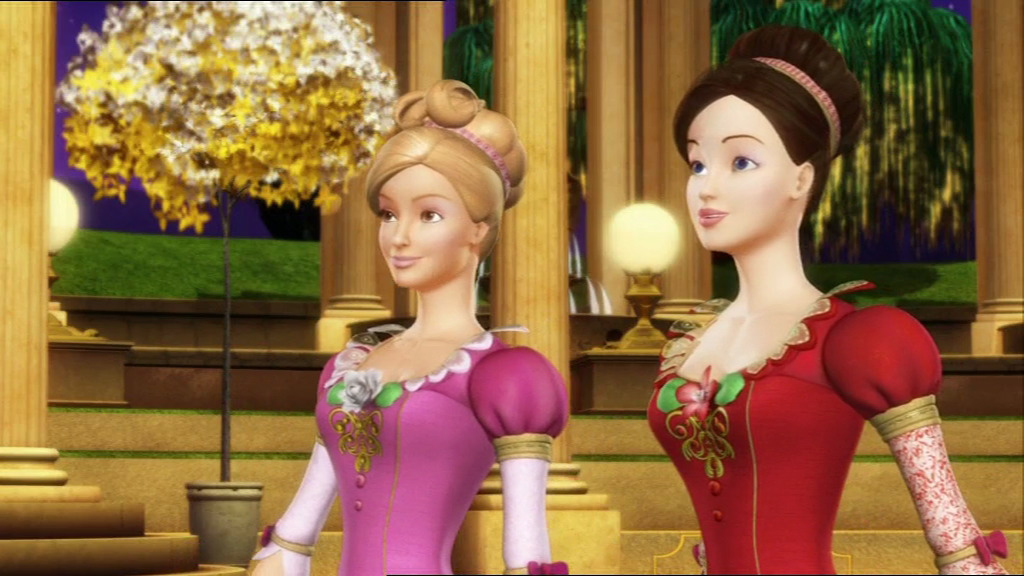 The animation is beautiful. From the design of the castle to the detail on the wallpaper, the animation and scenery (is that the right word?) is simply stunning. The nature scenes are especially wonderful! The girl’s dresses are very detailed and facial expressions always convey the character’s emotions and feelings to the audience. 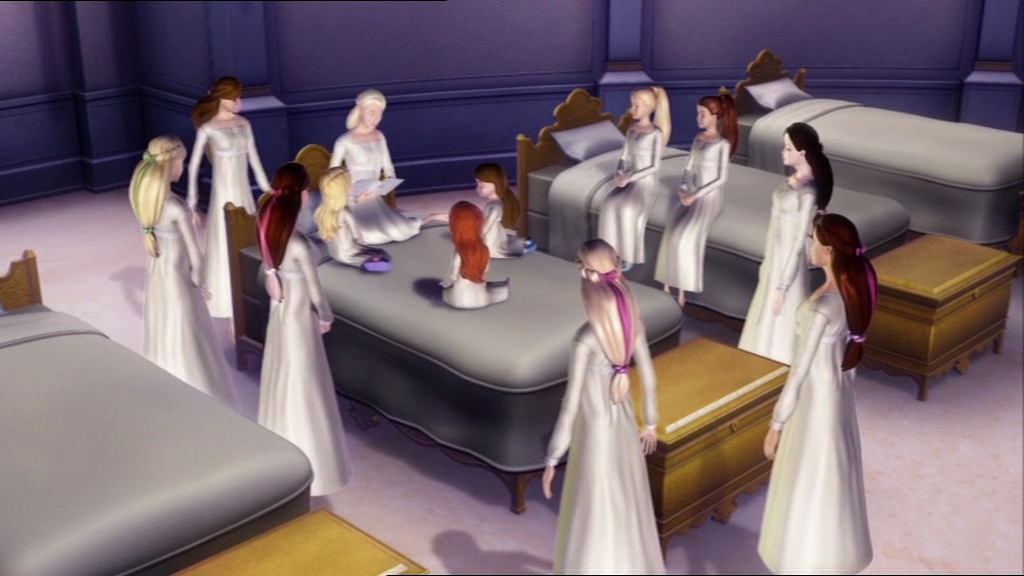 I really like the storyline. As I mentioned before, the characters are all very vivid with distinct personalities and interesting dialogue. However, the storyline is just as impressive! It’s full of surprises that you won’t expect. I won’t mention them here, in case you haven’t seen the film before, but it was really creative. The film unfolded at a decent pace, and there was some foreshadowing which I thought was really well done (such as Rowena standing exactly in front of the late Queen’s portrait, before the audience even knew she was the antagonist). 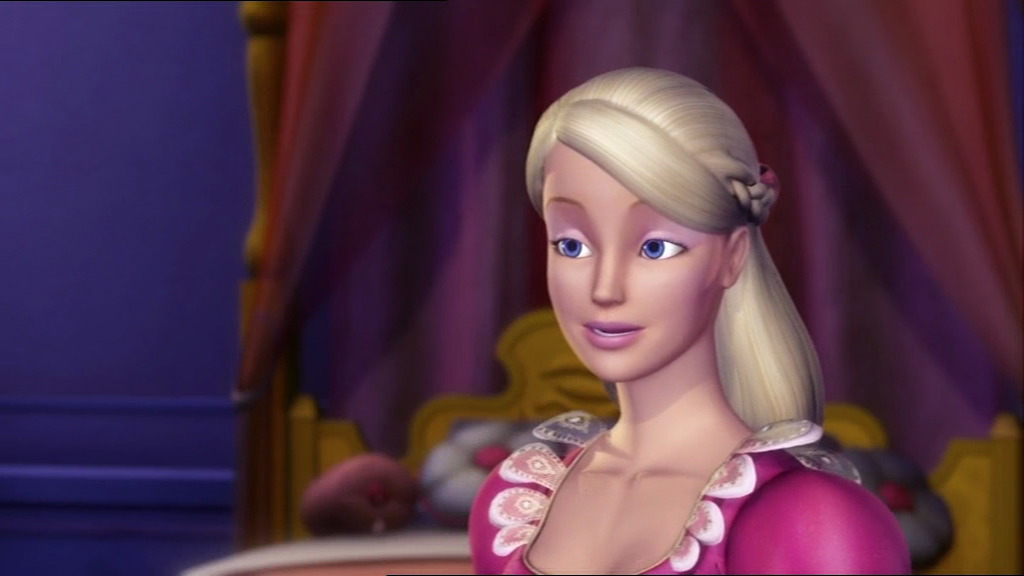 The film’s message is really great. Halfway through the film, the youngest sister Lacey struggles because she isn’t “good at anything.” All the other sisters have a special talent or hobby, such as reading, horse-riding or sports, expect for her. Lacey feels upset because she is always falling over and messing things up.

Genevieve comforts Lacey, and explains that all of us have a difference that only we can make. She explains that being “good at something” isn’t the most important thing, and we are all special and unique in our own way.

This sense of indiviudality is something that is really highlighted in the film. King Randolph wants to make his daughters more ladylike, and doing so, he tries to take away their own individual personalities. At the end of the film, he realises his mistake and comes to accept his daughters as the “wild” girls they are.

I know this is going to sound silly, but I also really like the girl’s hairstyles! There are many different styles shown throughout the film, and I think they are some of the best hairstyles in a Barbie film to date. I love how they have so many different looks!

I guess I can’t review this film without mentioning Derek, huh?

Derek, the local cobbler, is Genevieve’s love interest in the film. Compared to her relationship with her sisters and father, Derek definitely takes a backseat in the film. However, he still plays an integral part of saving the day -and I’ll admit, he and the bird make a good duo!

Genevieve: (giving an inspirational speech) …But we have something Rowena doesn’t -the power of twelve!

Felix: And what are we, invisible? (referring to Derek and himself, who were not acknowledged for their help)

Derek and Genevive have a cute relationship, and Derek is definitely a good guy -I mean, the poor bloke sold his horse to return a goblet for her! He also risked his life climbing up the castle to find Genevieve, which is pretty impressive. Their wedding at the end was cute, and that’s also a big plus for me.

I find it interesting that antagonists in Barbie films are quite evil, compared to modern-day villains who are significantly …less evil. Take Rowena for example -she poisons her cousin to take over the kingdom, and sends out a group of highly-trained knights to throw the princesses in the dungeon. That’s pretty evil, right?

And then compare that to, say, Princess Malucia, a ten-year-old princess who is not really evil at all! (from Barbie and the Secret Door)

Anyway, Rowena is pretty evil, but she isn’t as creative as Preminger (from Barbie: The Princess and the Pauper) or as sinister-looking as Philipe (from Barbie and the Three Musketeers). 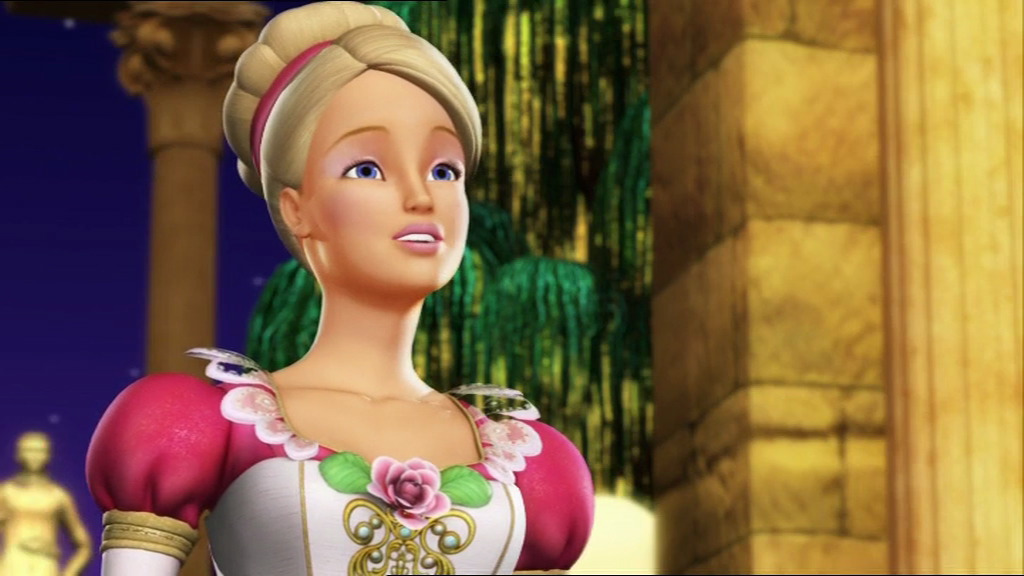 I suppose the one drawback of this film is the talking animals. I don’t have a problem with Felix the bird, because he actually interacts with the humans and makes funny commentary on what is happening, but the dialogue between Twyla the cat and Brutus the monkey is just annoying!

My sister was watching this film with me, and she mentioned that the wedding between Genevieve and Derek felt forced. While I think their wedding was a really sweet scene, I agree that it seemed a bit “shoved in there.” Especially considering Derek and Genevieve didn’t really interact that much during the film!

I suppose another “problem” with this film is the whole ordeal about the magical pavilion dance world. I guess it does seem a bit silly and corny, but honestly -it’s a Barbie movie about dancing princesses. What did you expect? It’s a sweet film nonetheless, and sometimes a bit of fairytale unrealism is nice!

Overall, I really enjoy this movie. It’s very pleasant to watch, and there are no scenes where I thought “oh, just hurry up!” or “this is too cheesy!” Every scene was very carefully crafted and entertaining.

Have you seen this film before? If so, what do you think?