“Just through the rainbow, from the world we know, lies… Fairytopia.” -Azura

The Barbie Fairytopia series is one of the most iconic and well-known Barbie films to date. The series has five films; today I will be reviewing the third film, Barbie Fairytopia: Magic of the Rainbow, which released in 2007.

Voice actors for the film include fan-favourites Kelly Sheridan, Tabitha St. Germain and Kathleen Barr. The film was directed by William Lau and written by Elise Allen, who have both worked on many other Barbie films. 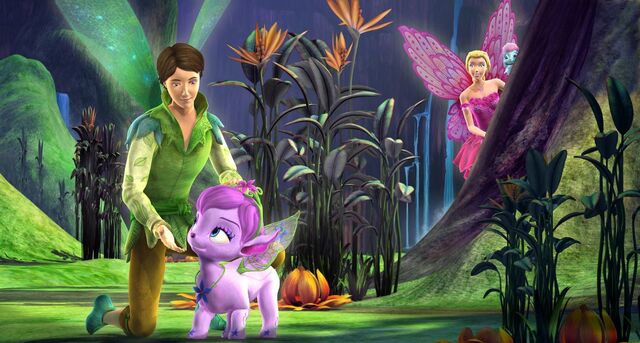 “Elina travels with her puffball Bibble to Fairy School at the magnificent Crystal Palace. There, she meets the other fairy apprentices, chosen to learn the annual Flight of Spring and magically create the first rainbow of the season. But when the evil Laverna tries to stop the Flight, threatening to plunge Fairytopia into ten years of bitter winter, Elina and her new friends must learn that “together we are strong”. But are they strong enough to defeat Laverna and bring the rainbow to life? And will Bibble, who has a loose tooth, fall in love with adorable puffball Dizzle?”

Alright, alright -the whole plot sounds silly, I’ll admit. A group of fairies tasked to create a giant rainbow to move the seasons along? Original, yes, but still silly. However, coupled with a Daytime Emmy award-nominated soundtrack, brilliant colours and snarly dialogue, trust me, this film is better than it sounds! 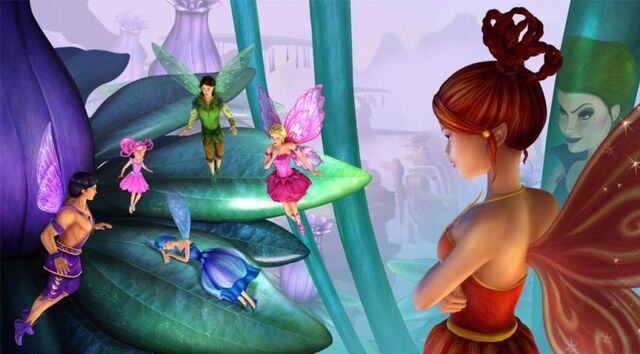 Out of all the Fairytopia films, Magic of the Rainbow paints Elina in the most realistic light. At the beginning of the the film, Elina is anxious to meet the other fairies and feels like she does not belong in a place as grand as the Crystal Palace. Elina is angry at Sunburst for treating her badly and lashes out during class, and once Laverna is freed, Elina feels incredibly guilty and feels it is her duty to fight Laverna alone.

It is this portrayal of Elina’s emotions that builds the audience’s connection to her character.

Unlike some other Barbie films, the other characters in the film are equally fleshed-out. From the moment she meets Elina, Sunburst, a sparkle fairy, is snarky and jealous of Elina’s accomplishments. She is rude to Elina in front of the other apprentices and tries to make her look bad. 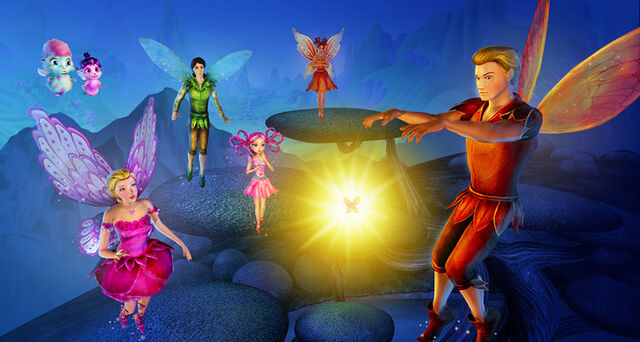 “Said it, thought it, had someone else say it for you, whatever. Point is -I’m not buying it.” -Sunburst

Faban and pixie Shimmer are also rude to Elina throughout the film. Shimmer dislikes Elina because she walked into her dorm accidentally, while Faban dislikes Elina because he is a self-absorbed jerk. (“You can call me ‘number one!'” -Faban) While she is not actively rude towards Elina, Lumina, a moon fairy, sides with the others and is annoyed at Elina for making the apprentices guard the Crystal Palace.

On the other hand, Glee, a nature fairy, and Linden, an oread, are kind towards Elina. Elina spends most of her time with them, and the trio become fast friends. 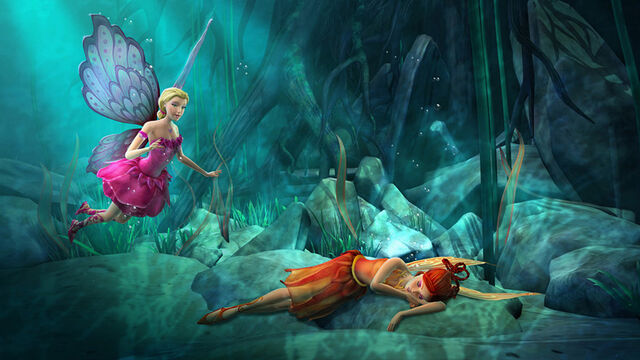 As I mentioned before, one of the most incredible things about the film is the soundtrack and the artistic ….what’s the word? The design of the landscape. The animation of the characters is smooth and pleasant to watch.

The Barbie Fairytopia series was Barbie Entertainement’s first original film, and the creativity of the storyline is reflected in this. (The earlier films, Nutcracker, Rapunzel, Swan Lake and The Princess and the Pauper are all adapted from classic stories). The film is incredibly engaging and I was never sure what was going to happen -unlike other Barbie films, you can’t really guess, as there are so many unexpected twists and turns. 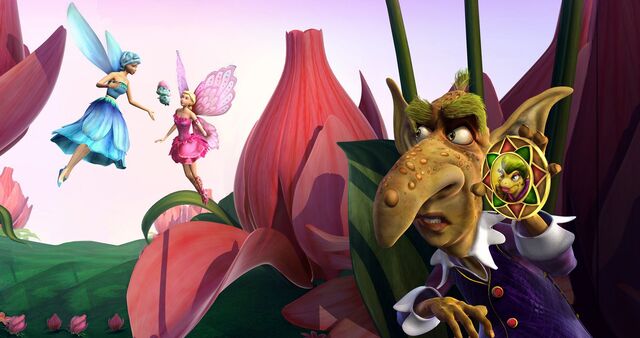 One thing I thought could have been improved was the moment when Sunburst was being kidnapped by Laverna -the audience can see Sunburst’s eyes widen as she stares at Laverna in shock, but this moment goes by very quickly and it could be difficult, particularly for younger viewers, to identify when exactly Sunburst was switched.

I also thought it was odd how, as soon as the Blush is destroyed by Laverna, winter immediately falls over the Crystal Palace. But… if the apprentices are trying to create the first rainbow of spring… Isn’t it already winter? Why wasn’t it snowing before? Or was this winter worse, because it was an “evil winter?”

The names ‘Shimmer’ and ‘Lumina’ are reused in future films, Barbie: The Pearl Princess (2014) and Barbie: A Fashion Fairytale (2010). This further strengthens my theory that characters have to be licensed somehow in order to produce a doll of them, and it is cheaper to reuse the same character name rather than buy a new license.*

*I’m not really sure how it all works, but something like that!

I digress. It’s a good film. It’s entertaining. This wasn’t the first time I have watched it, and it sure won’t be the last.

The motto of the film is “together we are strong.” Despite all their problems and differences, the apprentices are able to come together to defeat Laverna once and for all.

5 thoughts on “Barbie Fairytopia: Magic of the Rainbow (2007) Movie Review”