If you remember, I spent $16 on all four Rock ‘n Royals dolls, which equals $64 in total -basically, a whole lot of money. Yes, they used to be $25 each, so I guess I was getting a good deal but IT’S STILL A LOT OF MONEY.

So I decided to rewatch Barbie: Rock ‘n Royals again! This post isn’t a review, it’s a ‘character analysis.’ (If you’re looking for a review, I’ve already done one of those -you can read it here). Let’s see if I can like the characters a bit more!

Unlike the other princesses, Courtney isn’t stuck-up, selfish or rude towards the campers from ‘Camp Pop.’ She’s a little nervous about attending Camp Royalty, but she’s optimistic. At the very least, she’s glad to get away from her royal duties for a little while!

“If I need anything, I can call you, right?” Courtney says to her butler, when he’s about to leave Courtney at the dock.

“I’m sure that won’t be necessary!” The butler replies.

“Because… I’ll be having too good of a time.” Courtney says in return, a little uncertainty. I wonder if part of Courtney’s princess training is learning to repress her emotions?

“That’s the spirit!” The butler finishes, getting into the car. He’s obviously not very good at reading body language. Courtney waves him off, her smile wavering.

As Courtney speaks to Stevie, the audience can tell that she’s nervous. And why wouldn’t she be? She’s in a new place and for the first time in her life, she’s without her ladies-in-waiting and doesn’t know what the heck is happening.

However, Courtney perks up when she sees where she’ll be staying for the night. “Oh, adorable! This is going to be interesting!” Throughout the film, we can really see Courtney develop into a confident young lady, and we see how she adapts to her environment and slowly learns how ‘not’ to be a princess.

We also learn more about her home life -while Princess Courtney doesn’t exactly bag being a princess, it’s obvious she feels constrained there. She mentions not being able to write the kind of music she likes (“the palace is kind of a classical-music only zone”)* and not being able to pick out her clothes herself.

*I’m not sure if I quoted that correctly, it’s just from memory. 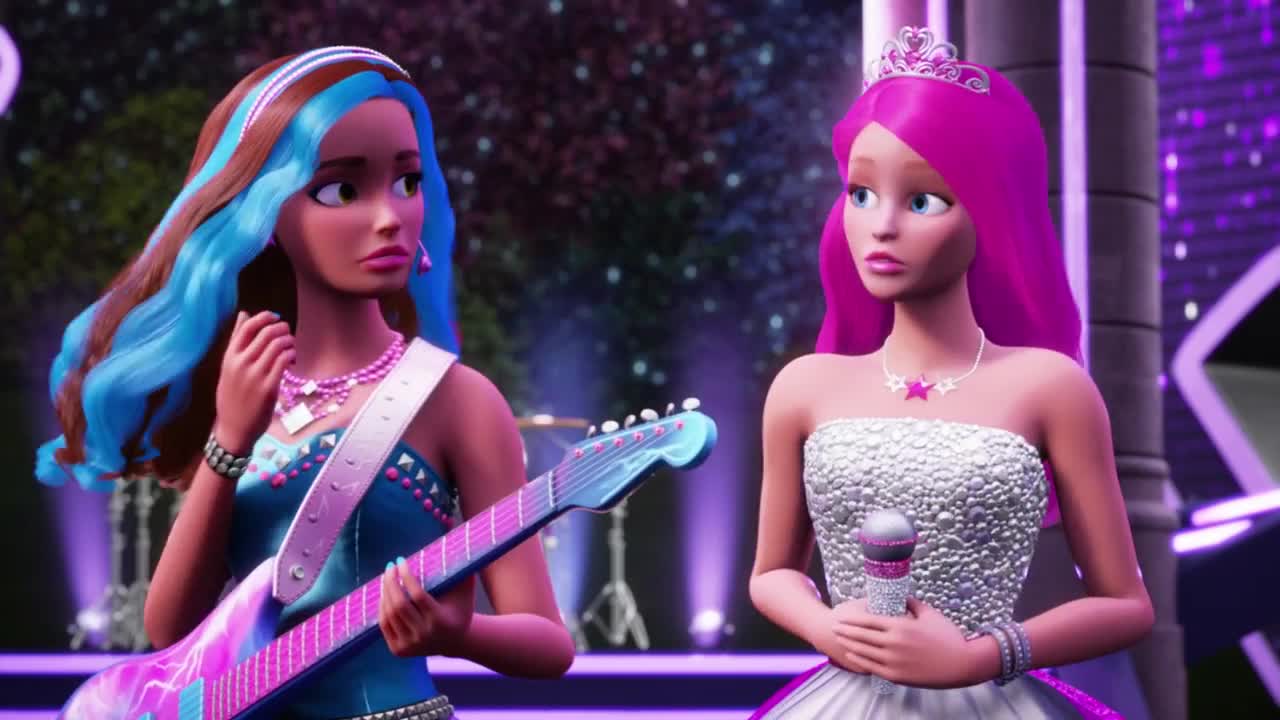 We learn HEAPS about Erika’s character the moment we are introduced to her. In fact, she spills her heart out to her driver on the way to camp.

“But why did you cancel your tour to go to this camp pop, anyway?”

“Having the spotlight to yourself can get kinda lonely. You’re surrounded by tons of people, but no one really feels like your friend.” At this point, the driver’s face saddened. He’s probably thinking about middle school or something. “Don’t get me wrong, I’m not complaining. I love performing. I don’t know, maybe things will be different at camp.”

When Erika bumps into Courtney, we see straight away that she isn’t afraid to make a statement. However, her confidence wavers on the ship to Camp Royalty when she realises all the other campers aren’t interested in getting to know her.

But once Lady Anne boosts Erika’s ego by telling her how amazing she is (despite not knowing who she was a few days ago…), Erika definitely changes into a not-so-nice popstar, stealing the spotlight, lashing out at others, threatening to quit the show and yelling at her friends. I actually like this -it’s character development, and adds a sense of realism. Of course a popstar isn’t going to fit in perfectly with a bunch of princesses! Especially when you’re a multi-millionaire who is used to everything going your way.

Erika reminds me of Keria, a bit, from Barbie: The Princess and the Popstar. But Keria is definitely more mature -while Erika had no problems putting her feet up on Lady Anne’s desk and humming a tune, Keria would more likely be calling her manager and demanding the problem be resolved ASAP.

Firstly -Rayna, really? Wasn’t this name already used in Barbie Fairytopia: Mariposa and her Butterfly Fairy Friends? (I know the actual title doesn’t have ‘Fairytopia’ in it, I like to include it anyway because it is part of the Fairytopia world)

That aside, Rayna isn’t so bad. She’s the token ‘crazy friend,’ and has more energy than Zia. She is the one who encourages Courtney to join in with the activities at Camp Pop, and is nice to everyone around her. Judging by her accent, she’s from the southern United States and is a country singer -which I think is cool, because we haven’t had a country singer before. Like Erika, Rayna plays the guitar and has a bit of a wild fashion sense.

Overall, we see that Rayna’s a good time -she’s fun to be around, she’s friendly, she has killer dance moves. But that’s all, really. We don’t learn about her family, what her problems are… She doesn’t really contribute much to the storyline.

Zia: Yeah, everybody knows that!

Okay, when we were first introduced to Zia, I didn’t like her. I didn’t like her high-pitched voice and the fact she was patronising to Courtney with the whole ‘everybody knows that.’ Like, obviously Courtney didn’t know? That’s a bit… Ugh.

But eventually, she grew on me. She and Rayna are obviously best friends, and it looks like they have a lot of fun together. She’s nice, and I like her clothes. I thought it was a bit odd how she “couldn’t find her wig” at the beginning of the film, and then the wig is never mentioned again… I think it would be cool if it was a running gag that Zia was always wearing a different wig, or always brushing her wigs, or, I don’t know, something to do with that!

Similarly to Rayna, we don’t learn much about Zia -her family, her problems, etc. There’s no subplots in this film, apart from the romance between Lady Anne and The-Other-Guy, whose name I forgot.

I’ve decided to include the non-main characters in here, too. Just for fun. We are introduced to Aubray at the docks, giving the Camp Pop campers some nasty looks with Olivia. However, don’t judge her by that! Aubray ends up being a great friend to Erika, and a solid performer, too.

When Erika arrives in Aubrary’s dorm room, she immediately asks if she is there to do their nails -which I suppose is fair enough, since Erika isn’t exactly dressed like a princess.

Aubray definitely acts as the ‘token dumb princess,’ and screams out ‘this is so exciting! It’s like we’re secret agents!’ when they’re trying to be all sneaky and quiet in the dark. She’s not exactly ‘dumb’ but there are moments where you know she’s in there for comedic relief.

She’s got a sense of humour, too. One of my favourite lines in the film is when Erika is boasting about singing her first solo at the age of five, and Prince Edward remarks that he couldn’t even dress himself when he was five. In turn, Princess Genevieve leans over and says ‘you’re not that good at it now, either, Edward!’ Har har.

Another one of my favourite lines of hers is ‘she’s got her tiara in a twist.’ Despite her good manners and violin-playing abilities, she wears a denim jacket over her gown -perhaps this represents how she is a more relaxed princess? I don’t think I’d see Delancy Devin sporting a denim jacket!

Okay, so overall, even though I watched the film really closely and analysed every line (what does this mean? why did that character say that?), I don’t think I came any closer to understanding the characters.

It’s odd how they made dolls of Zia and Rayna, but not dolls of Genevive and Aubray -who showed up in the film equally as often. There was also a Prince Edward doll! I don’t think he spoke throughout the whole film! They weren’t even friends with Edward!

I’m really not sure what to do with these dolls! I love the film, and I know it’s easy to make up my own backstories for the dolls, but it’s difficult to know what to do with them… It’s tricky because I don’t have any dioramas for them to go into, same with my Barbie as The Princess and the Pauper dolls. They’re pretty, but they’re almost useless.*

*That sounds ungrateful. I just meant, I hate them sitting there! But I don’t know how to incorporate them into my ‘world!’