UPDATE: The Dolphin Magic trailer and song have been released, and I am not a fan. I’m very disappointed, because I was actually excited… But more on that later, I just wanted to update ya’ll.

Years ago, if you had asked me what my favourite Barbie film was, I probably would have said ‘Barbie in a Mermaid Tale.’ Nowadays, not so much -in fact, I haven’t seen it in years. But today, when I sat down to watch, I was pleasantly surprised; not just at how good the film was, but how I could still remember most of the lines!

The original plot was:

When Marisa, played by Barbie, discovers she is half-mermaid, she must help the citizens of Atlantia by rescuing their queen–her mother. Marisa and her underwater friends have to complete three tasks in order to release her mother from the clutches of the evil Eris, who longs to rule Atlantia.

Pretty cool, huh? I like reading about the early development of films.

Anyway, in the real version, Barbie plays Merliah Summers, a champion surfer from Malibu who discovers she’s half-mermaid. Her father died before she was born, and her mother lives under the sea, as a full mermaid. Merliah was raised by her grandfather, Break, who doesn’t tell her about her mermaid half until she “comes of age.” That is, her mermaid half starts to show up.

Understandably, Merliah is super-freaked out and feels like something is wrong with her. The surf commentator doesn’t help by calling attention to her fresh pink streaks, either.

Merliah befriends Zuma, a sparkly pink dolphin, who takes her to Oceana, where she meets Xylie and Kayla, two fashionable mermaid best friends. While they might wear different outfits and have different-sounding names, their personalities are very similar, so they’re tricky to tell apart.

Through some close-watching, I discovered that Kayla is more confident, and often speaks before Xylie, whereas Xylie is more knowledgeable. This is demonstrated when Xylie knows the riddle to find the dream fish.

Oceana is ruled by Eris, Merliah’s aunt. Merliah’s mother, the true ruler of the underwater kingdom, is locked up, and it is Merliah’s quest to defeat her aunt Eris and ensure her mother’s rightful place on the throne.

Ah! That is where the Destinies come into it! The Destinies are three physics who tell Merliah, Kayla, Xylie and Zuma how to defeat Eris. Merliah needs to gather three items -a comb, a dream fish, and Eris’ protective necklace. Merliah is very clever and resourceful, so she is able to use her prior knowledge, surfing talent and dancing skills to get the items.

Once Merliah has all the items, she defeats Eris in a final battle and saves her mother. Hooray!

At the beginning of the film, Merliah rejects her mermaid side, and wishes for it to go away. By the end of the film, she embraces it, saying “whatever else I am, I am half-mermaid princess of Oceana, and it is my duty to protect my subjects!’

I thought it was great how Merliah was initially angry and confused at her grandfather’s explanation, it definitely made it a lot more realistic than ‘oh, cool! Let’s go save this underwater city!’

My favourite thing about the film was definitely the scenery -I’m not sure if that’s the correct term, but basically, all the gorgeous underwater scenes. The coral! It just makes me want to go snorkelling or something!

I also particularly liked how Merliah didn’t have a romantic interest. In fact, I don’t think there are any named male characters, aside from Merliah’s grandfather. So that was good.

Oh -I also really, really liked Merliah’s house. It was so beachy and fabulous.

Back on land, Merliah’s best friends are Fallon and Hadley. They’re different, both in looks and personalities, so it’s easy to tell them apart. Thank goodness! Hadley is lighthearted and loves to make jokes, although sometimes it’s difficult to tell whether she’s being serious or not. She’s a bit of a ditz, which is interesting, because she looks similar to Teresa, and Teresa is a bit of a ditz as well.

Fallon is much more serious, and offers more practical advice. She gets bumped up to the competition team during the film, so we know she works hard to achieve her goals. She’s always thinking about Merliah’s safety, too, which is the mark of a strong friendship.

I thought it was fantastic how Merliah communicated to her friends via her watch. It’s interesting, because back in 2010, that technology was possible, but it sure wasn’t mainstream. And now it’s 2017, and almost everybody has an Apple Watch!

Altogether, the movie is good. It’s not a bad movie. However, I did find myself getting bored at points -in particular, the jellyfish scene. I actually considered turning it off! But I didn’t, and for that I am glad, because it did improve from there.

Look. I liked it, but I probably won’t watch it again in the near future. There aren’t any subplots, it’s just about finding the three items, final battle, happily ever after. It’s very straightforward.

I just want to quickly talk about the main “transforming” doll, because I desperately wanted her as a kid, and now I don’t really.

This is the outfit that Merliah wears in the film, so cool, that makes sense. I get that the hood has to be massive in order to make the tail, but it still looks a bit ridiculous.

Also -Merliah is a surfer. Obviously, you can’t remove her jacket, so she can’t really surf. Or wear anything other than this. I think that is a big design flaw. Her lips are way too pink, and her hair is much longer than in the film. For a doll that’s designed to get wet, surely long hair is a big no-no? It’ll get all tangled and knotty!

And flat feet! Why did they even do that?? 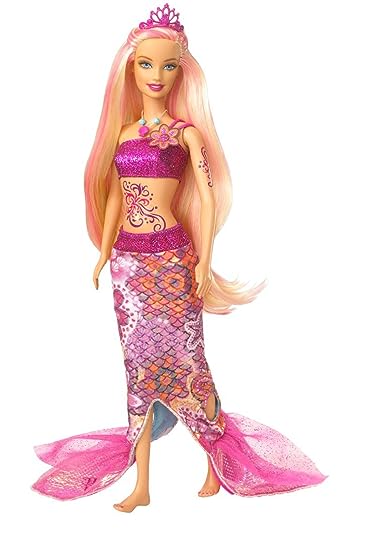 This is her in ‘mermaid form.’ When you put her in water, she gets the cool tattoos and colour change hair. That part I like! I think that’s awesome! (even though she doesn’t actually get tattoos in the film…)

Of course, you can push the tail together so it looks more like a tail, and less like a mermaid costume. I like how they added the exact necklace and tiara as in the film, I like things to be exact.

Overall, the doll looks a bit cheap. And it’s got some major flaws, I don’t think the jacket was the best option.

Here’s the ad, so you can see how the transformation works.