Mattel has produced a ton of cruise ships throughout the years. The most recent one (that I know of) came out in 2011 and really focused on Barbie’s sisters going on a ‘family holiday.’ My cruise ship came out in 2003, and I remember opening it on Christmas evening. It was amazing! Looking at the pictures now, I realise that I lost a lot of stuff pretty early on (like, I don’t remember playing with those pieces whatsoever). For example, there was a karaoke microphone? And a pool? I literally had no idea.

Unlike the 2011 version, this one really focuses on the whole ‘I’m a cool teenager!!1!’ thing. Here’s the ad: https://www.youtube.com/watch?v=fOjFJ9MqTB4

And here’s the product description from the Consumer Regulations website:

“BARBIE® CRUISE SHIP This luxurious Cruise Ship for Barbie® doll and her friends has everything for a fun vacation getaway including a girl-sized pretend camera that activates cool sound effects. Barbie® doll and friends can lounge at the swimming pool, eat at the buffet, dance at the night club and get a good night’s sleep in the bedroom cabin. Lots of accessories for vacation play are also included.”

I actually forgot about the camera until I read that. It was a chunky pink thing! I used to use it as a torch, and take pretend photos of my family. But of course, I grew up and chucked it away. Not the cruise ship though! All of the pieces you will be seeing here are the same pieces I played with over and over again. (My favourite game was making the children fall overboard and making their parents come rescue them. Often there was sharks involved, and sometimes the parents “wouldn’t notice” for several days and the kids would go hang out on some island. It was pretty chill.) 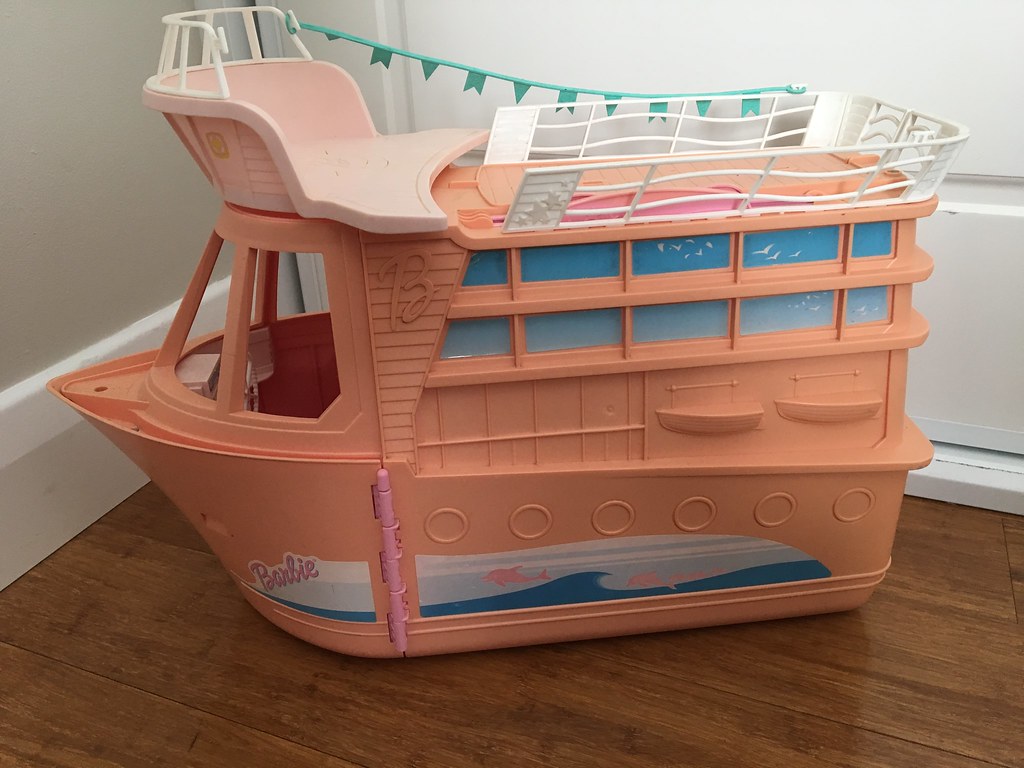 As you can see, I only have one string of bunting. The top part doesn’t quite “click” into the bulk of the ship, but I don’t think it ever really did. Unless I broke it… I probably broke it… 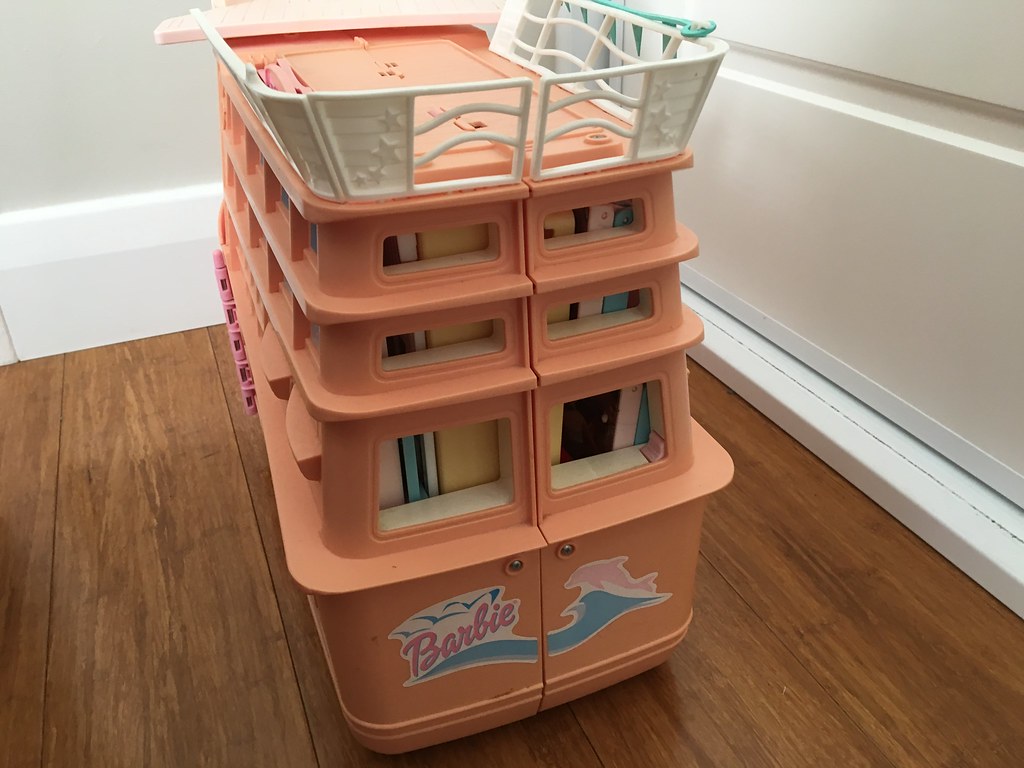 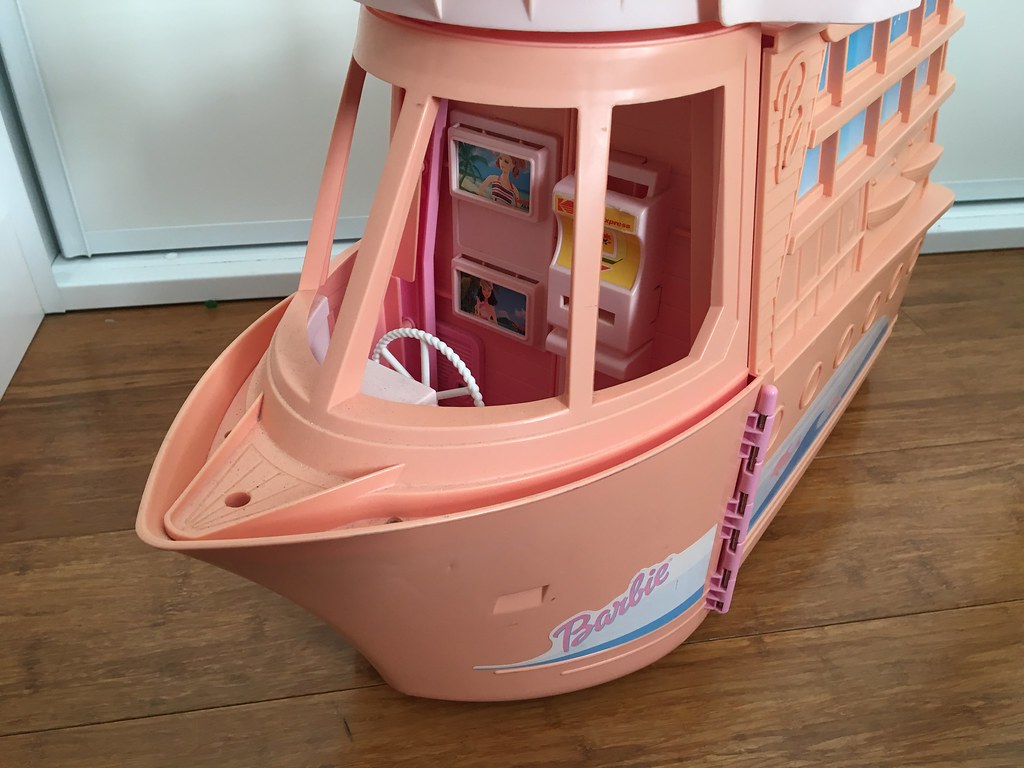 I normally keep the cruise ship up on a high shelf in my cupboard, so it doesn’t get used very often. So when I pull it down, it’s always lots of fun! 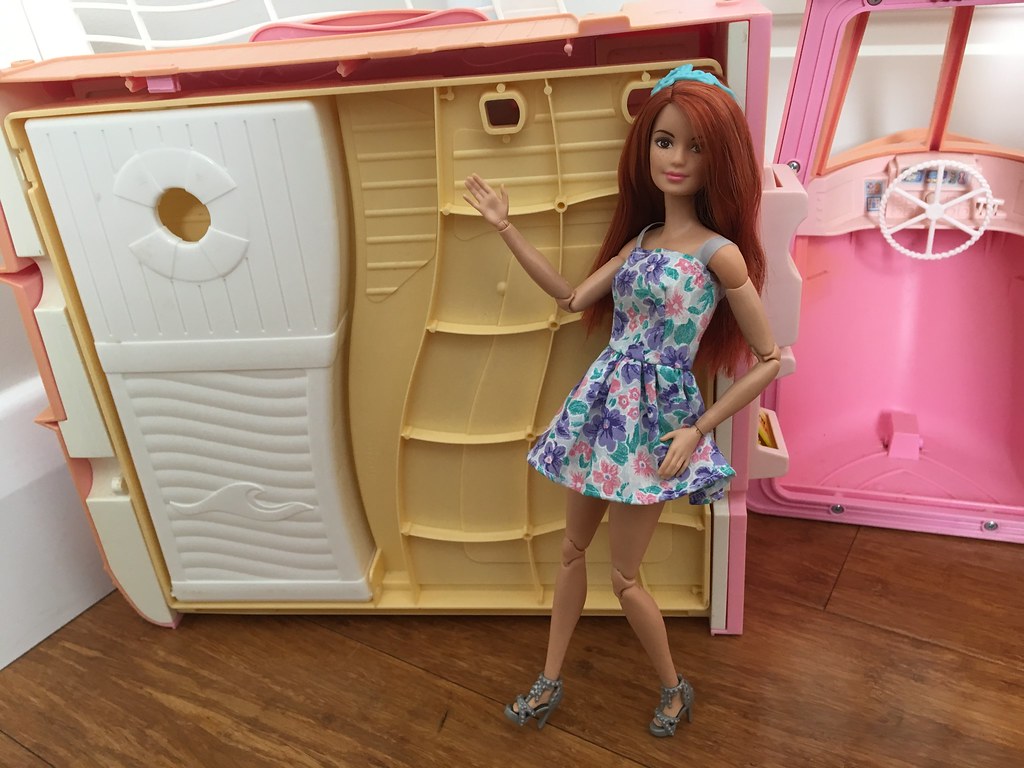 When you open the ship, this is what you see. Nothing special, apart from this white bit of plastic. 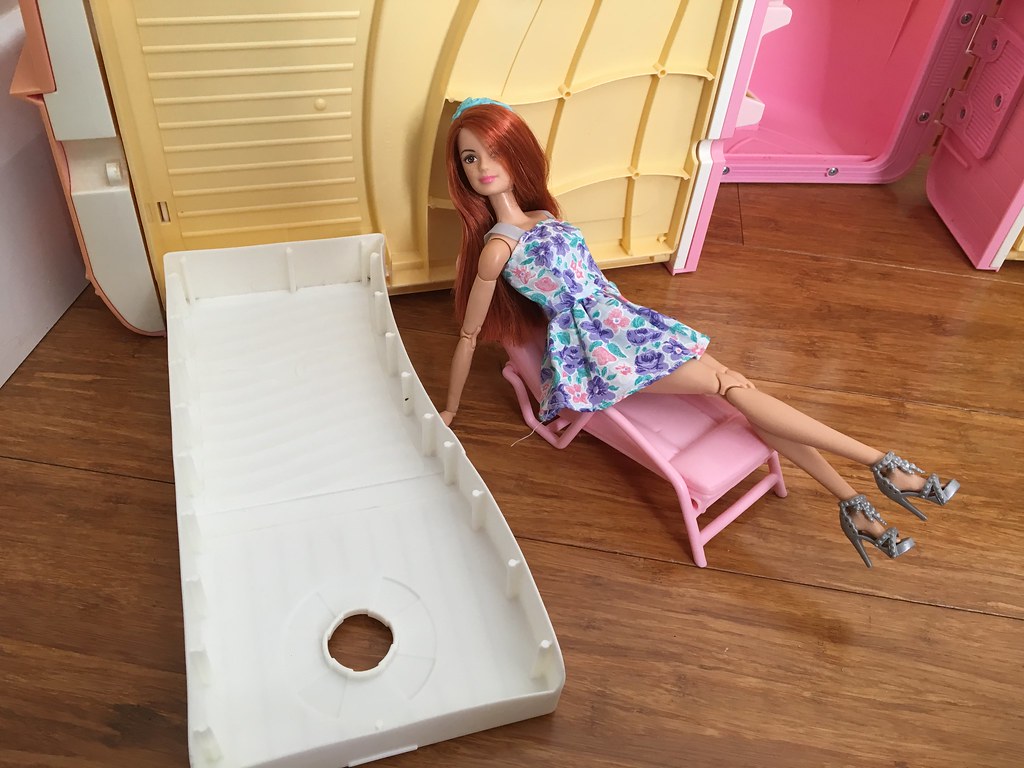 It’s a storage container! Personally, I wouldn’t store anything in here, but I can see it’s advantages. When I was a kid, for some reason I never opened this? I thought it was just …there. You can imagine my shock when it fell open and I was like ‘oh, gosh! I broke it!’ only to discover it was supposed to do that. 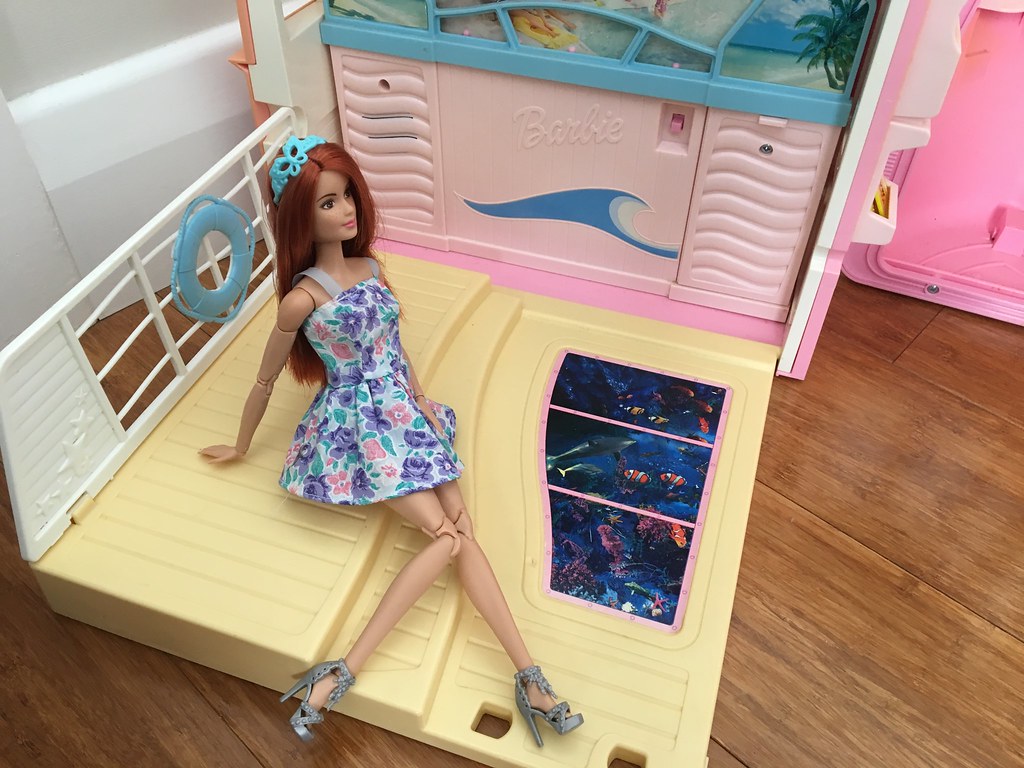 Here there is a deck with a fence that can be moved up and down, and a fish-viewing thing! I really like how they made it on two levels, with the stairs. It’s such a cute addition. I really like the fish-viewing thing, too. I always thought it would be cool if they actually did that on cruise ships, but then I realise that they are multi-story with lots of machinery underneath, and it’d be too dark to see anything underwater! 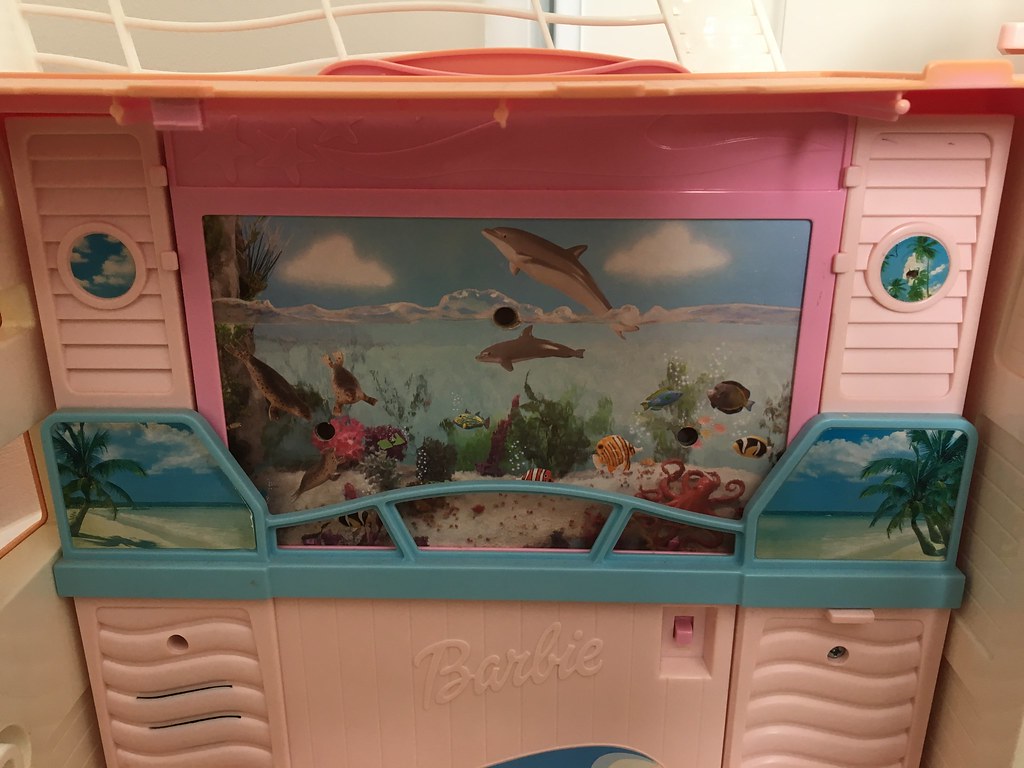 The panels here can be interchanged to show different scenes. 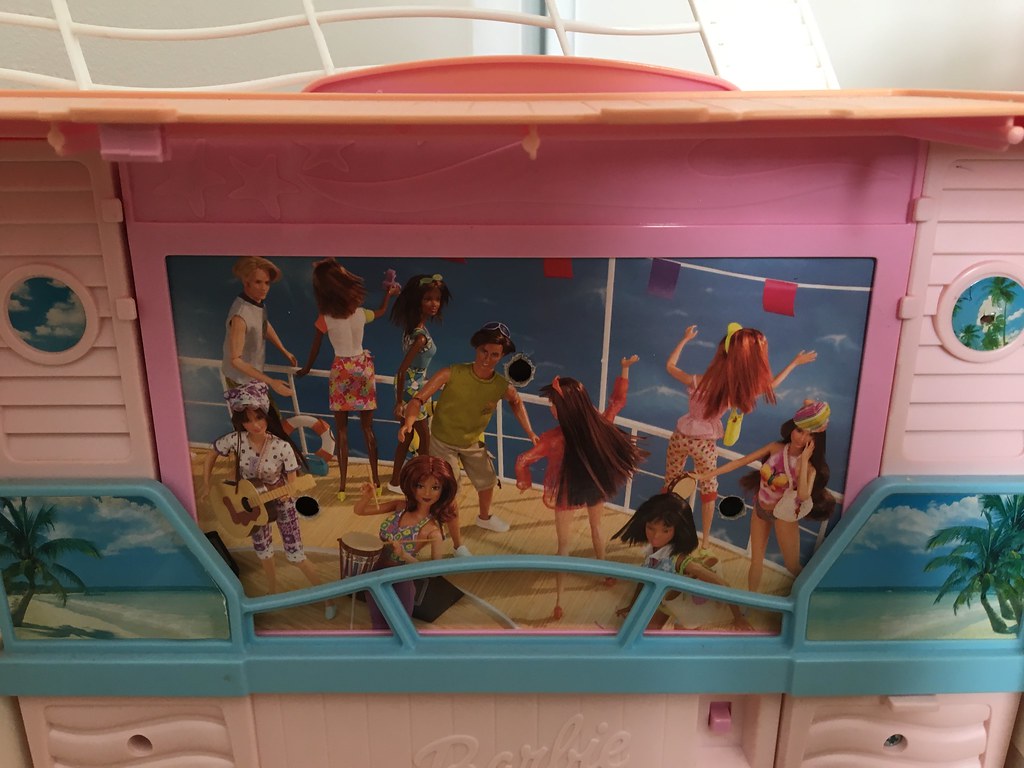 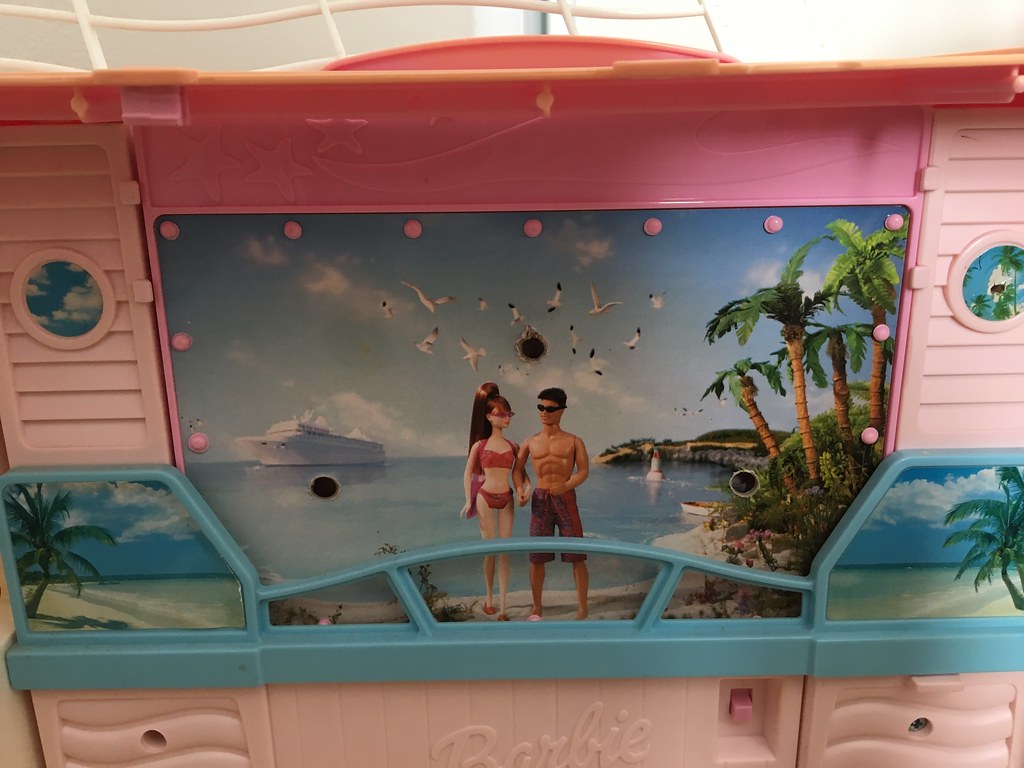 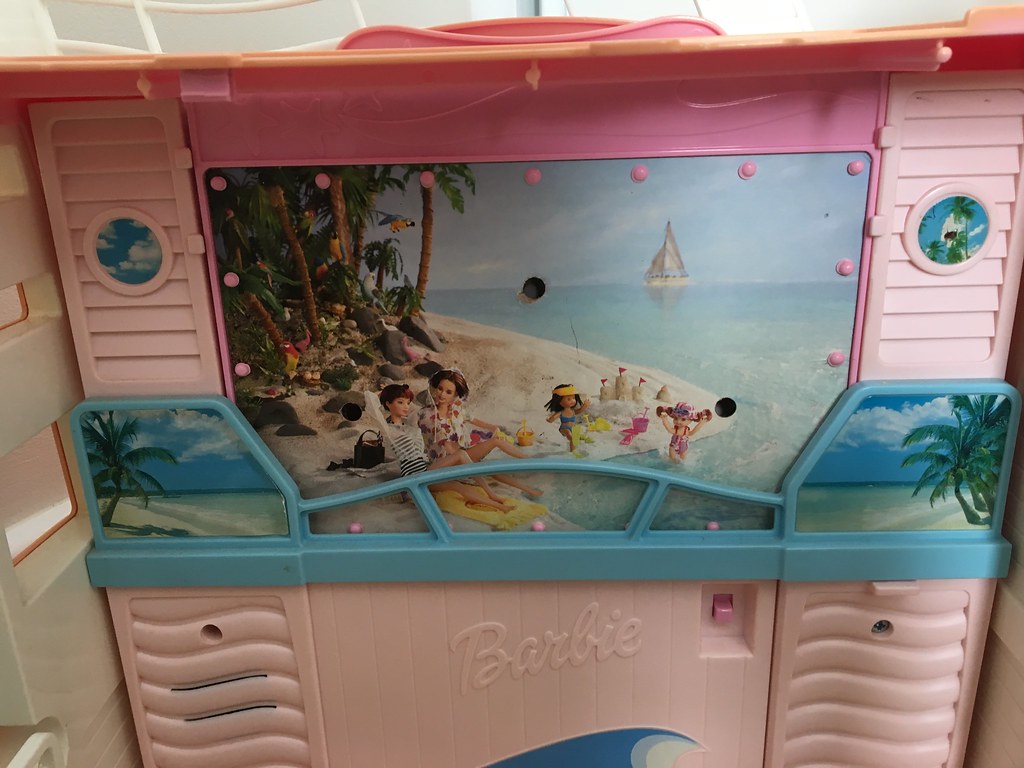 These are really cool. Not sure if the dolls were every produced, but they’re awesome. Everything is so …early 2000s! 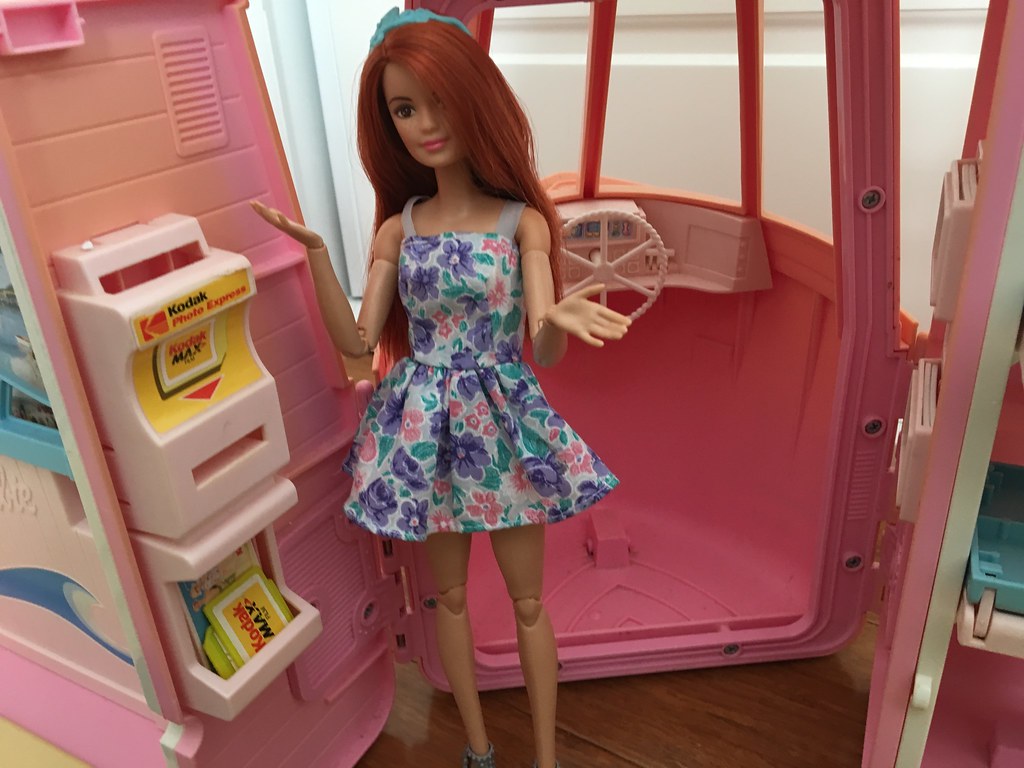 Lord knows what this thing is. You put a picture up the top, stick in the card and the picture comes out the other side. I don’t really know what the point of that is, but watch out you don’t accidentally shove the card inside the machine -it’ll get stuck for years. 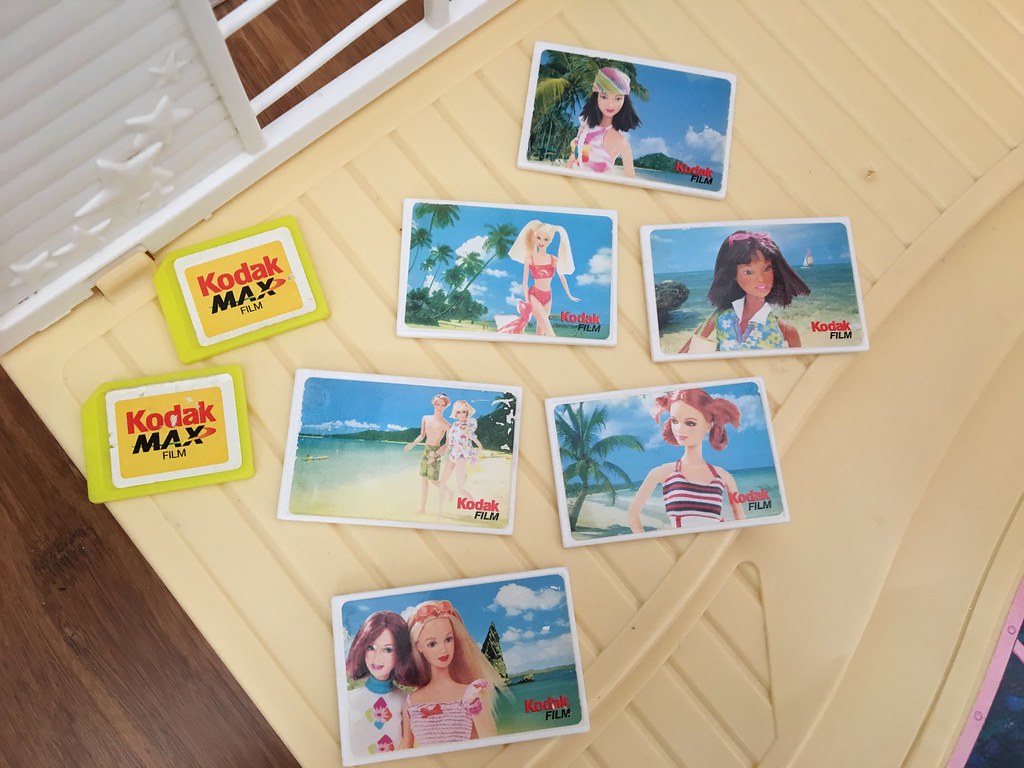 It comes with really cool photos -you’d never get anything like this nowadays. I don’t know if any of these dolls or outfits were real, but the fact it came with so many holiday snaps is really cool. 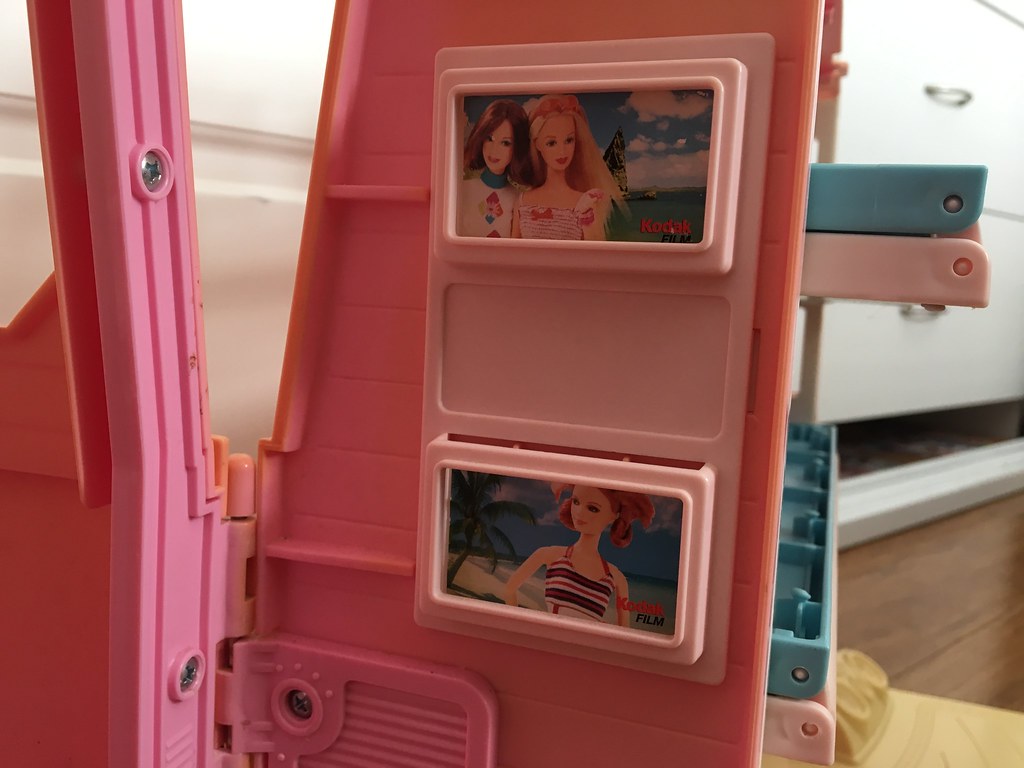 The photos can be displayed on the wall. 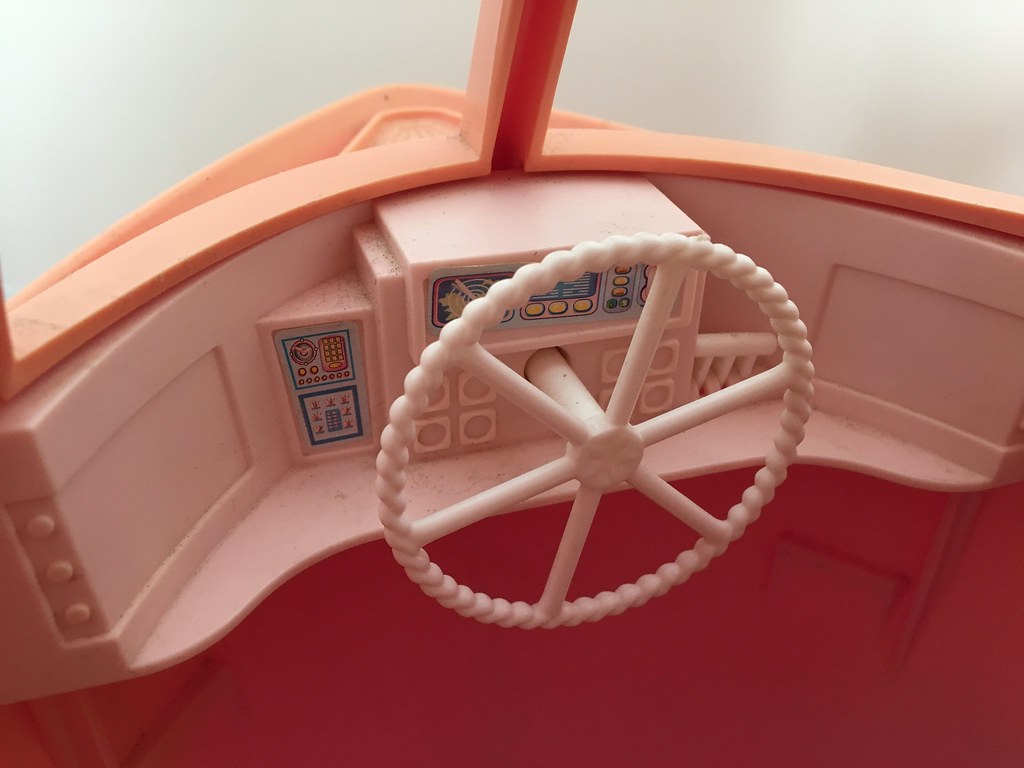 And here is the controls (ignore the dust, okay). You can turn the wheel, and the little lever moves up and down. I wish there were stickers to put on the two panels to the side -it would look really cool if there was a radar map or something. 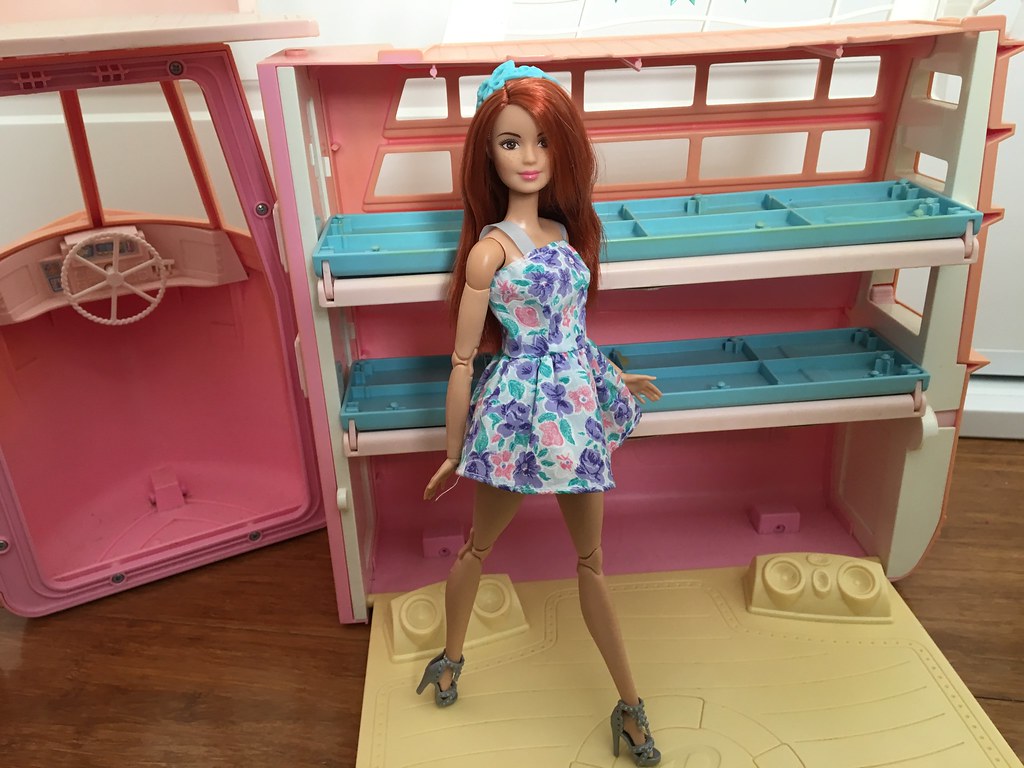 This is how I usually keep this area of the boat. I liked to put food on these shelves and it can be like a buffet. 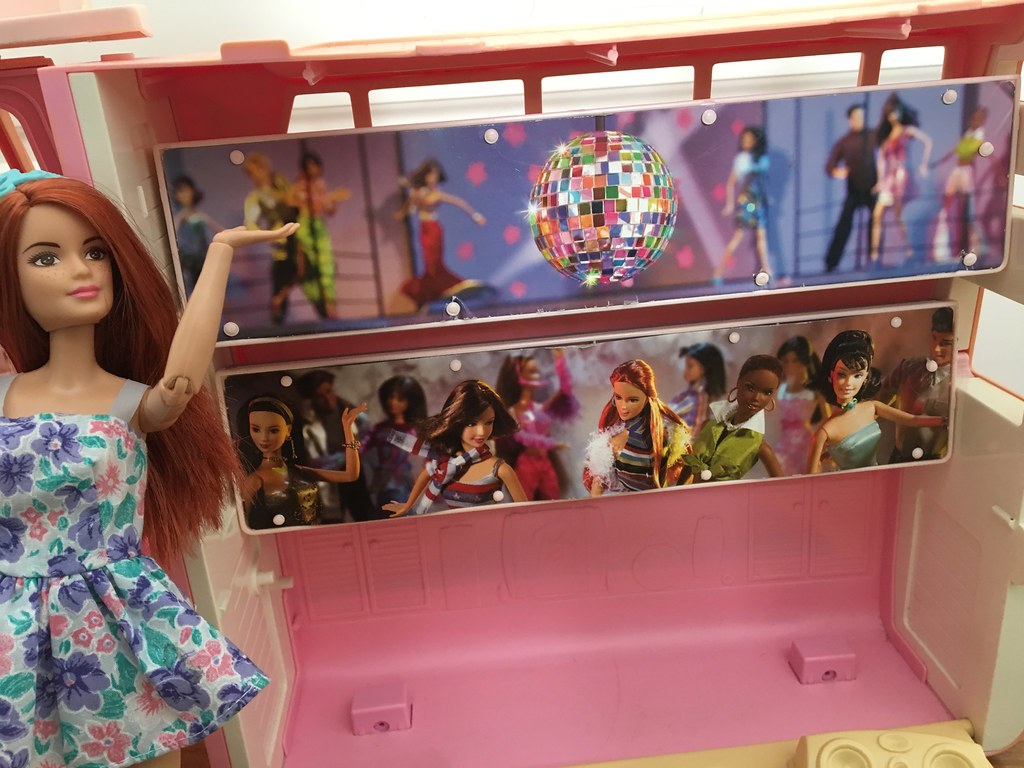 Of course, flip the shelves up and it becomes a dance party! I encourage you to take a closer look at the images -those dolls were awesome! Again, I’m not sure if they were ever sold, but they’re really cool. The one on the very left looks like a pre-Raquelle, ha ha.

Interesting Fact: I also own a TV from a living room set with this same design on it! The TV was produced a few years later, like 2005 or something. 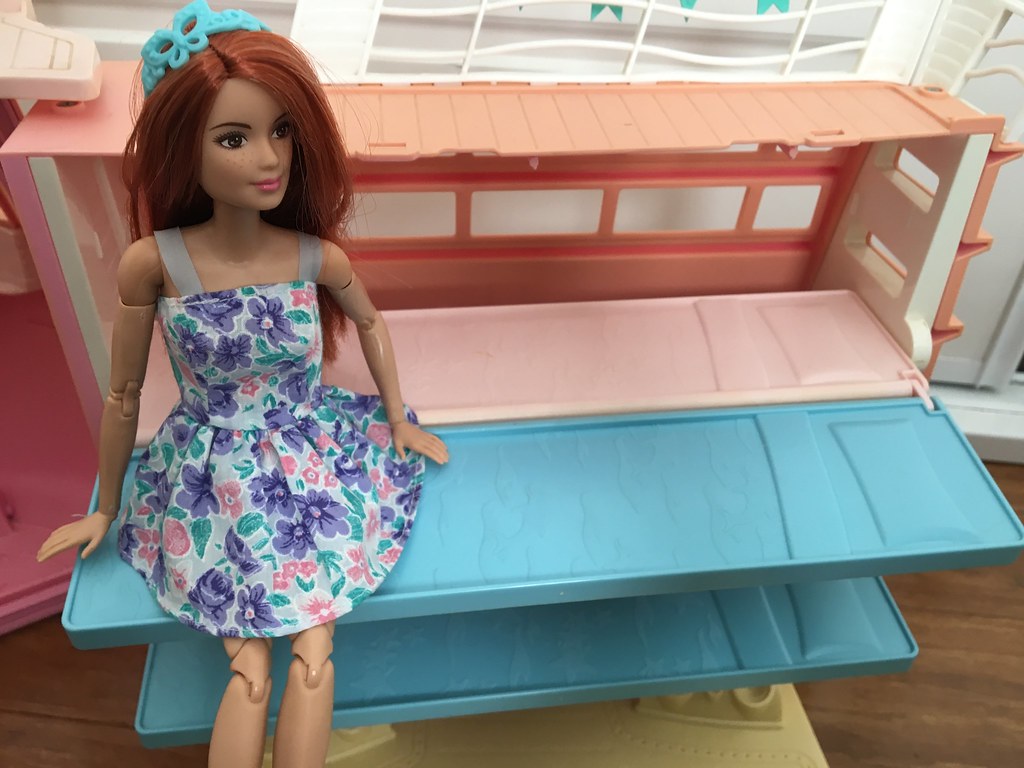 Flip the shelves down, and it turns into 4 beds -which is quite a lot, really, especially since 4 adult Barbies take up a lot of room. It’s quite strong, so I don’t worry about the plastic breaking at all. 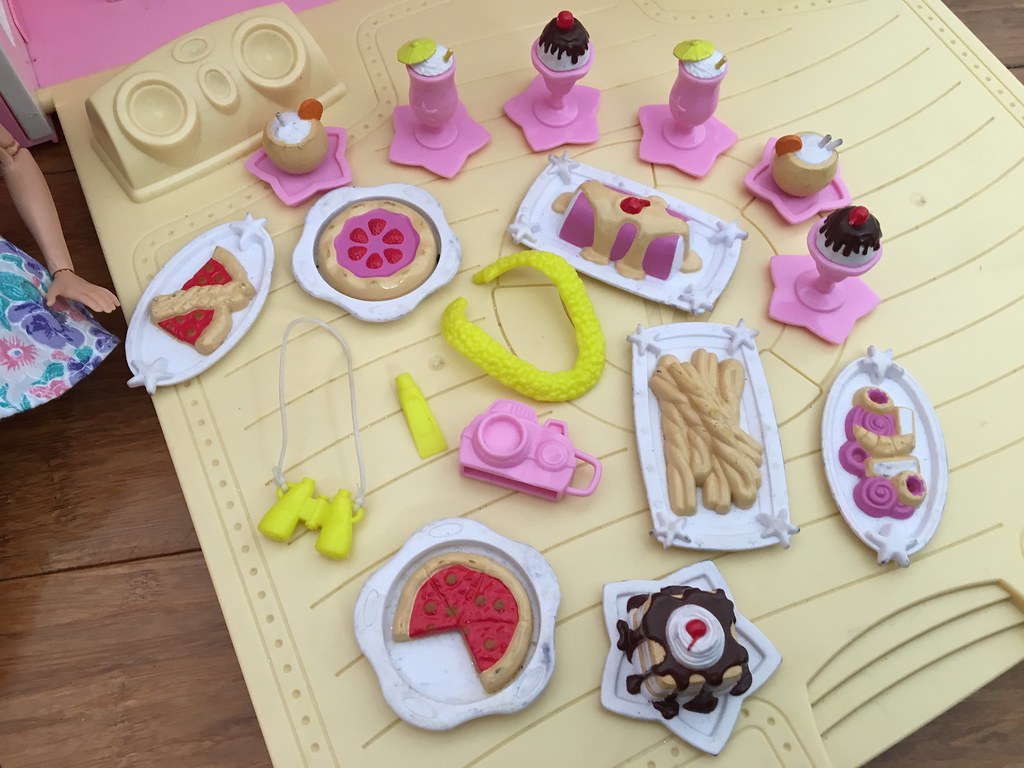 Here are all the accessories I have left -look at all that food! No wonder I was disappointed when I bought a kitchen set that only came with 2 food items!

-Another plate of pizza (I must have sold it)

Apart from that, I think that’s all the accessories it came with. 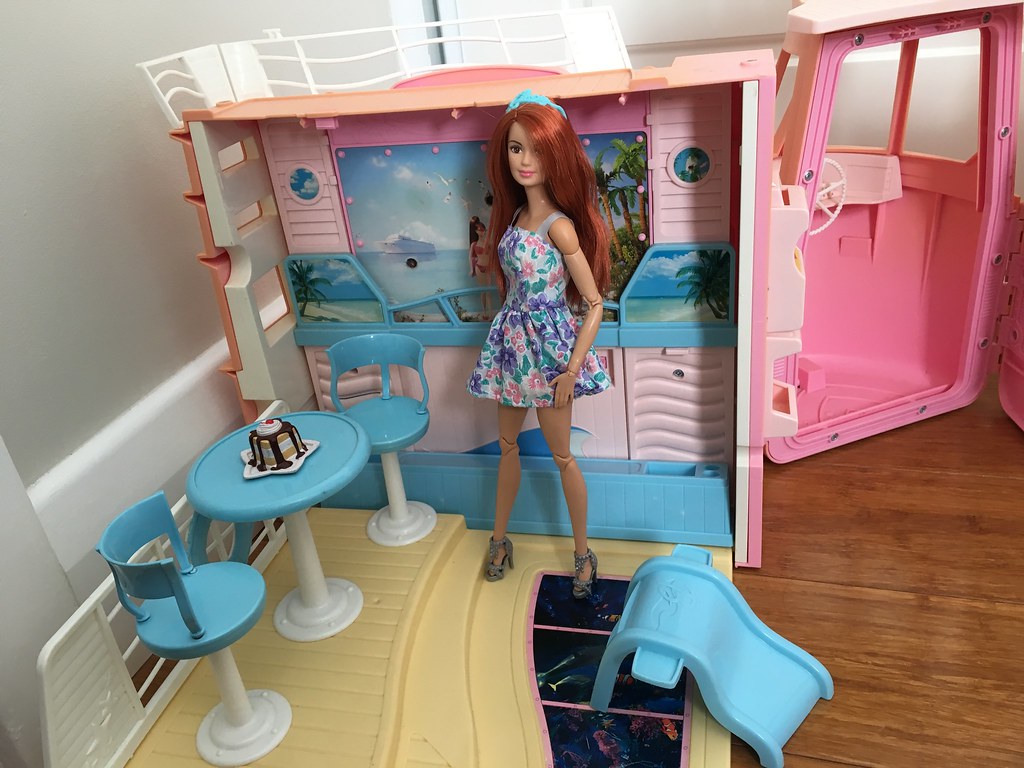 And here’s some bigger pieces -a table, two stools and a slide. I always wondered why on Earth it came with a slide, but now I know there used to be a pool! I don’t use the chairs very often because they’re actually broken, so it’s difficult to sit on them.

Oh, there’s also a buffer table down the back there. It’s quite low-down, so I prefer to use the shelves. 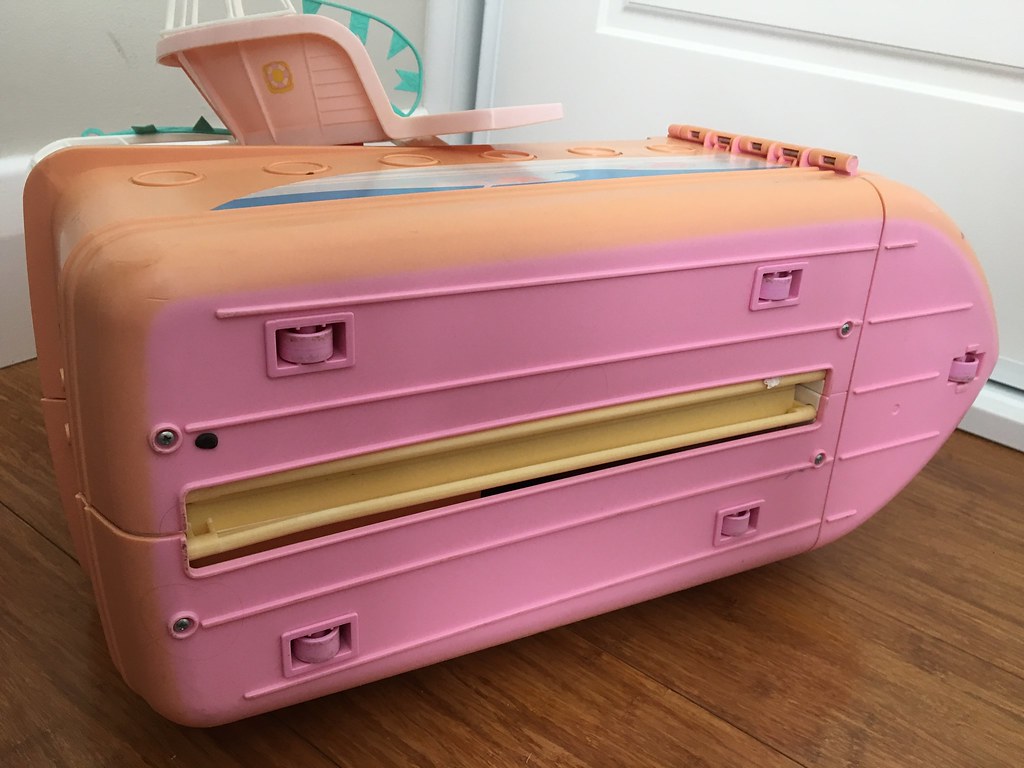 For comparison, here’s the original colour. It’s amazing what a little light can do! (It’s crazy because it’s not like it was ever kept in full view of the sun, it was rarely facing a window or anything)

It must have faded pretty quickly, because I never remember it actually being this colour. I wonder, will it keep on fading? Will it eventually turn a pinkish white? That would be awful.