Warning! Long-winded introduction ahead! Skip ahead to the pictures if you don’t want to read 🙂

When Amazon Australia first launched, I was keen AF. I was ready for that glorious cheap shipping, extended product ranges and exclusive items that can’t be bought in-store.

I was wrong. Very, very wrong.

At launch, Amazon Australia’s shipping was insanely high, the items themselves were crazy-bizarre (we’re talking $540 for an umbrella here) and the stock was so limited that there really wasn’t a point even having a look.

On the 1st of July 2018, things got even worse. Until that point, Australian residents were allowed to order things on the US version of Amazon, and yes, the shipping was incredibly expensive (I literally spent $100+ on shipping once), but it often worked out cheaper in the long run.

Anyway, on the 1st, the government decided that you have to pay 10% tax on online purchases (kind of like in Canada, and some places in Europe). Or something like that, at least. I’m sure there’s rules and regulations, but I’m not the type of person that has the kind of brain-power required to understand the news, okay?

Anyway, Amazon decided that was all too complicated, and said that Australian residents can’t buy from Amazon US anymore. Cue lots of crying, swearing and Twitter rants.

“But don’t worry!” Amazon said. “You can still order from the Australian site!”

“Yeah, mate, but nobody likes that site!” said every-consumer-ever. It was safe to say that Amazon’s reputation was down the metaphorical toilet.

A few months later, Amazon started advertising on television. I first noticed the advertisements only on Foxtel (that’s the kind of television rich people watch), but they eventually spread to mainstream television.

I thought this was incredibly bizarre. Why would Amazon advertise ~now?~ Don’t they want to build up a nice inventory first? Fix up their shattered reputation? Open more warehouses?

Fast-forward to September 2018, and I’ve realised:

In a complete turn of events, there are …actual products… for really cheap prices?? With a regular amount of shipping? There are even …exclusive products? That can’t be bought at regular stores? (Skipper Babysitter Inc. Playsets, I’m looking at you!)

Anyway. It’s great. I’m very happy. I don’t hate Amazon anymore. I’ve made a nice big wishlist, and I’d like to talk about those products and I dunno, this was a long introduction BUT I HAVE A LOT OF ANGRY FEELINGS, okay? 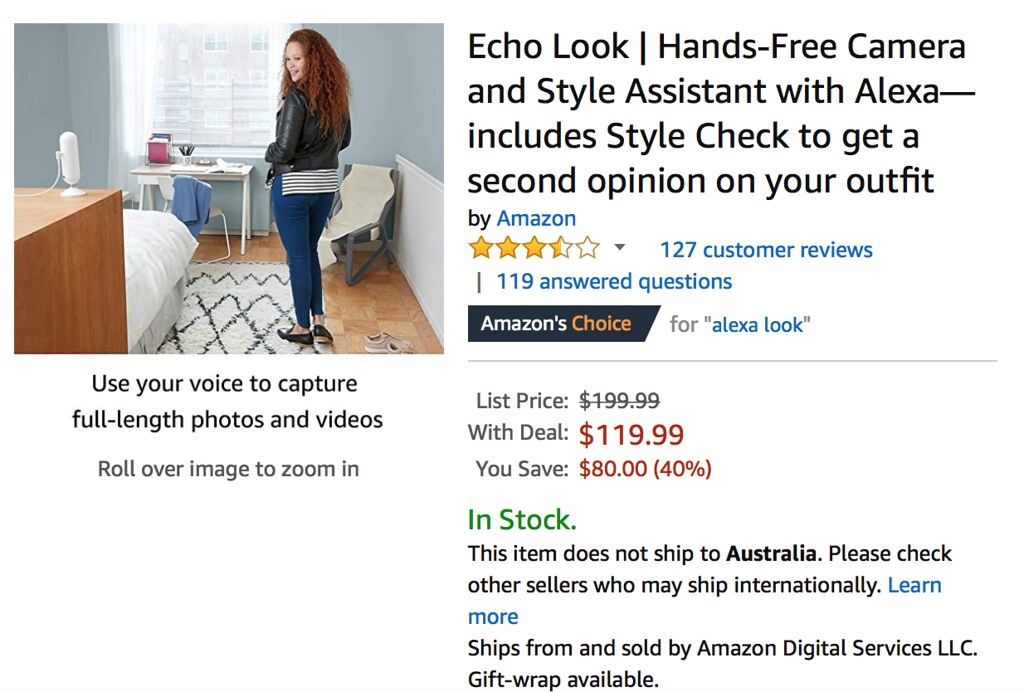 I mean, look at this device! It takes a photo of your outfit and you can see everything in your wardrobe on your phone! (I know there a similar apps, but it would be much easier if you didn’t have to set up a tripod and organise everything manually)

And this! You can bake brownies with only edge pieces! What a dream come true!

Alright, I know what you clicked on this for -let’s get onto the Barbie stuff! ~ Here’s my 2018 Updated Wishlist! 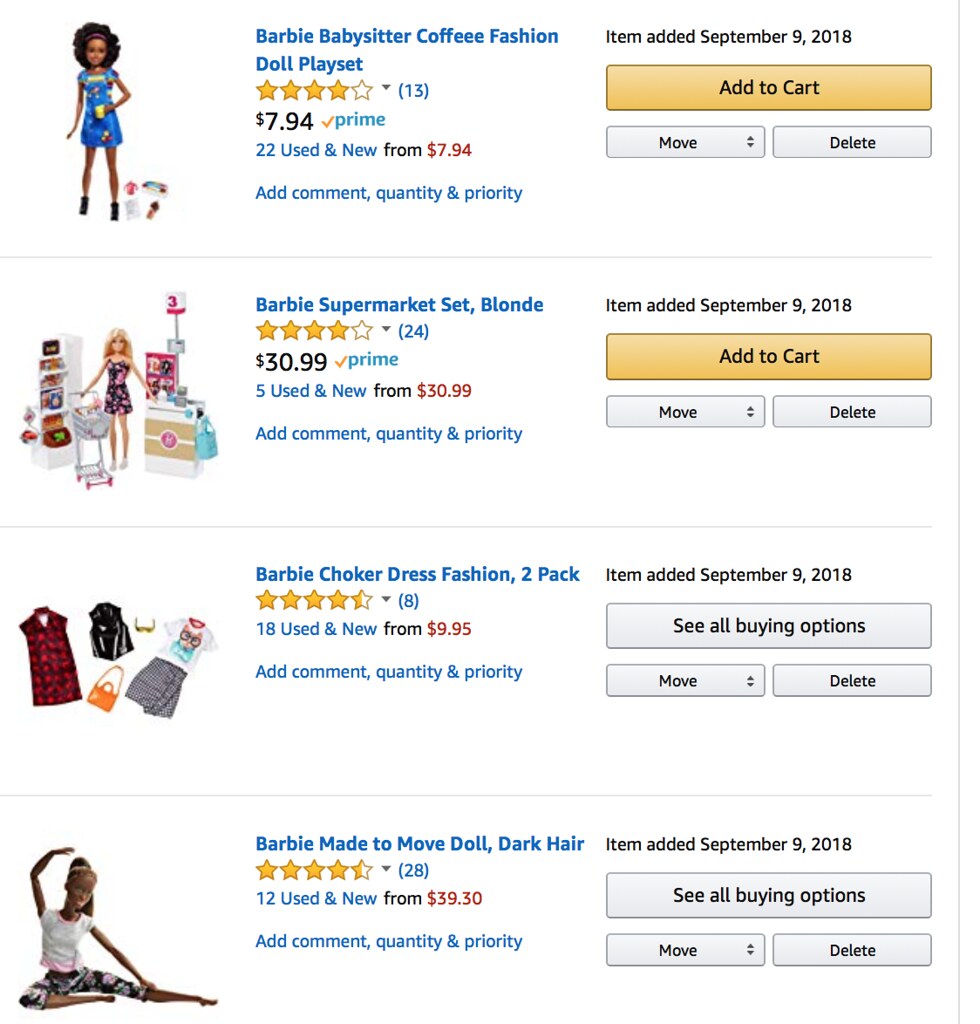 Skipper Babysitter Doll- I actually saw this doll at the shops for $12 and I was tempted to buy her, but then I told myself “no! You don’t need it!” But the thing is, she’s actually pretty cute. I like her hair. She’s wearing a cute outfit. And who knows, perhaps they won’t produce any more friends for Skipper after this? This might be my last chance! 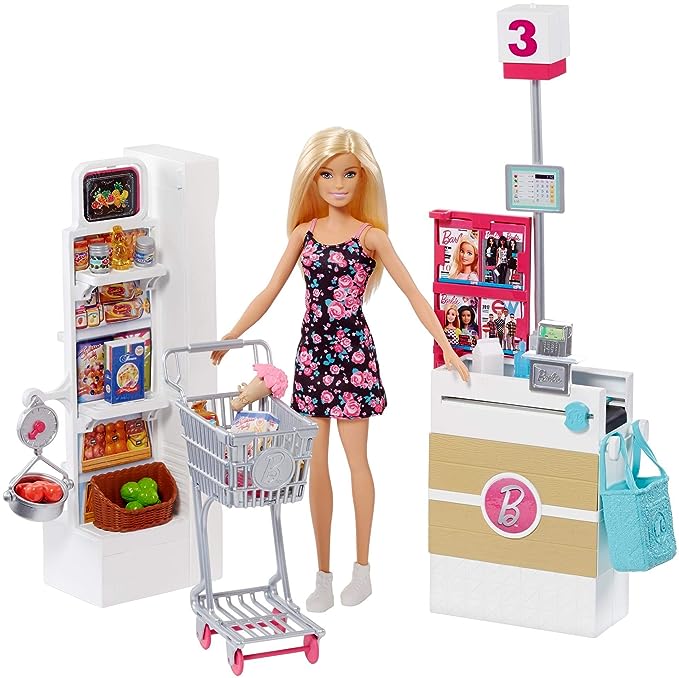 Supermarket Playset- This playset might be small, but combined with other items, I’m sure it could work! (Although, two playsets might be even better…) I feel that the supermarket would be a great place for two characters to “bump into each other” and have a quick chat. Skipper could get a job at the supermarket, or launch her own range of baby food… There are lots of possibilities! 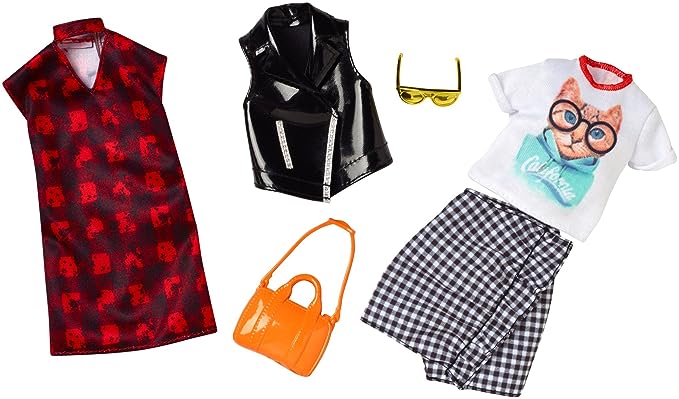 Choker Dress Fashion Pack- I’m not a fan of the jacket, but that dress and skirt are CUTE! The shirt is really nice and casual, too. I need more casual outfits! ‘Nuff said. 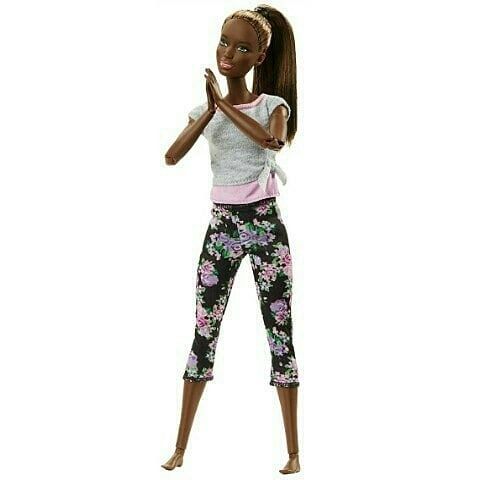 Made to Move, Dark Hair- Not only are those leggings super fashionable, but this doll would be perfect for rebodying! It was hard to find AA Fashionistas, and now it’s even harder to find AA Made to Move dolls. I’ve got to seize the opportunity, right? 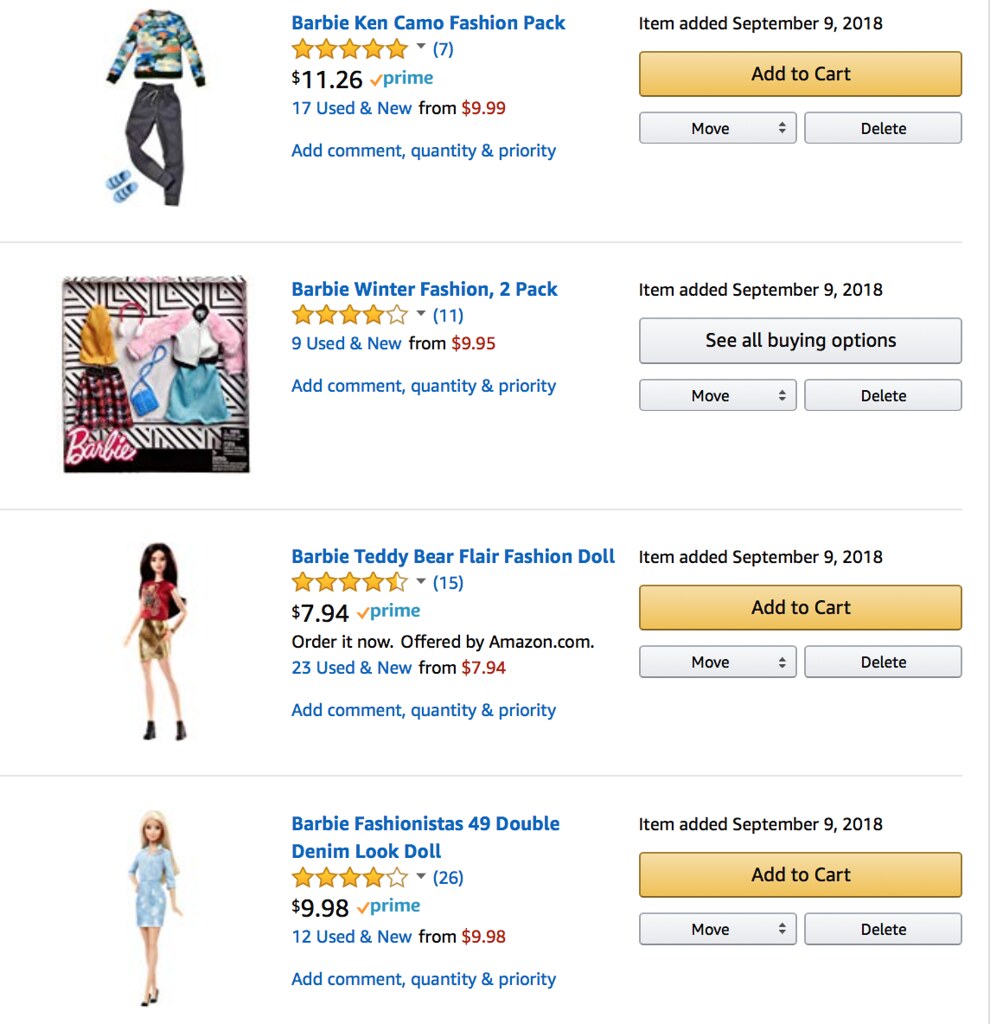 Ken Camo Fashion Pack- I only have one Ken doll left, but still, a man’s got to have a decent wardrobe! At the moment, poor Ryan only has two sets of bathers, a few shirts and one pair of pants. This camo fashion set would be a great addition! 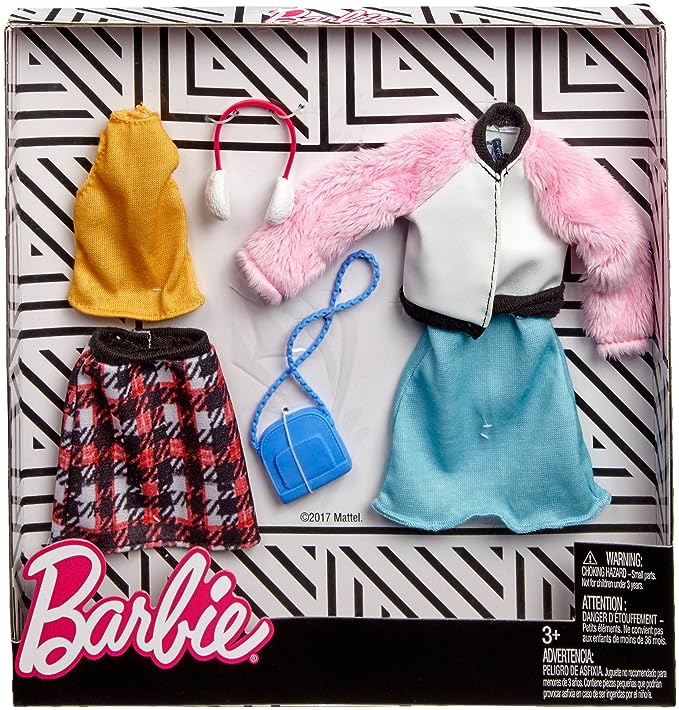 Winter Fashion Pack- While I strongly believe that dresses and skirts are not “appropriate Winter fashion,” this fashion set is seriously cute! I especially love the yellow shirt with the red plaid skirt.

Teddy Bear Flair Fashionista- I know this doll isn’t technically supposed to be Raquelle, but I would definitely make her Raquelle in my collection. There can only be so many “nice girls” in Aquifolia, after all!

Fake Bake” Fashionista- I’ll admit that I saw this doll in the store and I passed over her, but LOOK. I was WRONG. I didn’t realise this would be the dress that features in Dreamhouse Adventures! Is that the only reason I want this overly tanned, bright eyed doll? Absolutely.

Also, here’s a neat review (not mine, obviously) from a while ago. 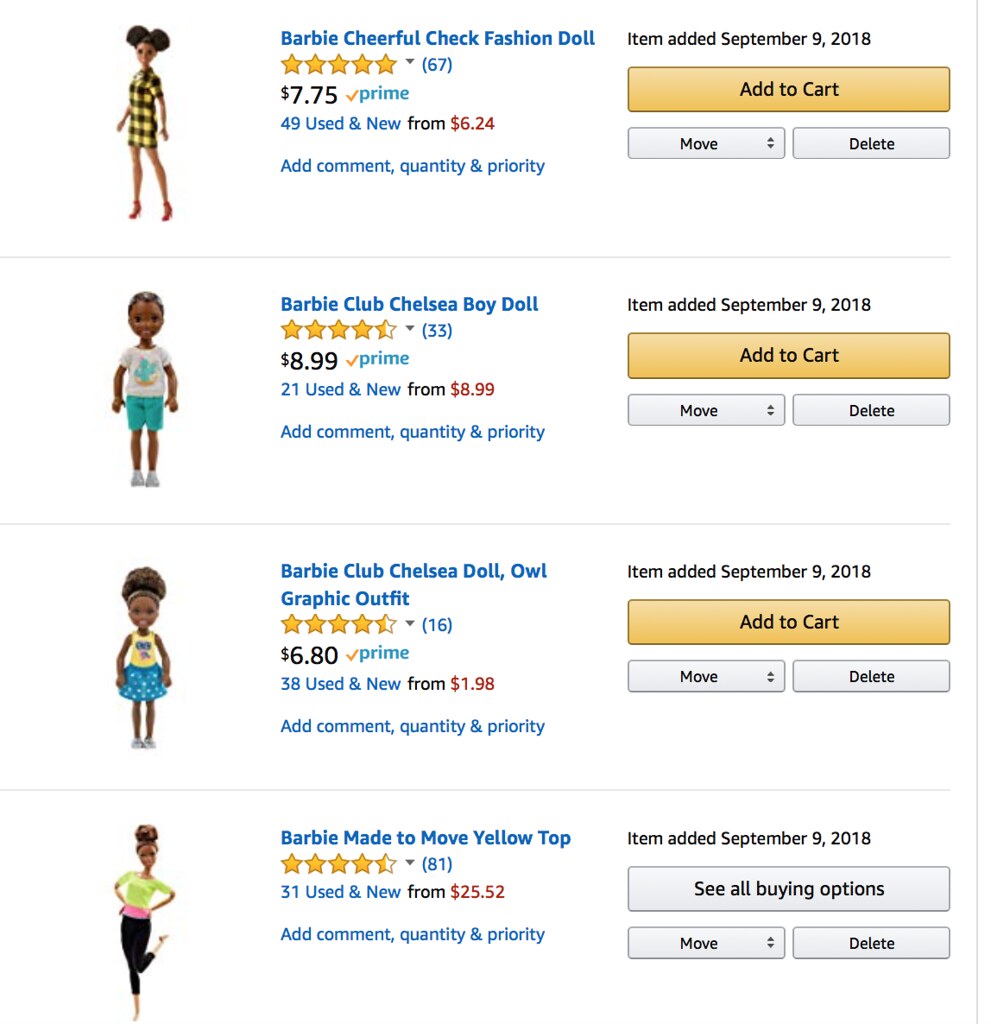 Now, I thought all these dolls would be awesome as a family!

Colourful Check Fashionista –Ah, the middle child! This doll would be a big science fan, but she’d also have regular teenage problems with her friends, schoolwork, crushes and whatnot.

Club Chelsea Boy Doll –The youngest twin, this boy doll would be a troublemaker! He’d get into lots of mischief at home.

Club Chelsea Girl Doll –The Club Chelsea boy’s twin, this doll would be Chelsea’s best friend! She’d love playing in the garden and having fun with her friends.

Made to Move Yellow Top –This doll would be the oldest sister, so she’d always be taking care of her siblings. She’d also love shopping and sports -perhaps she’d be a cheerleader or gymnast? 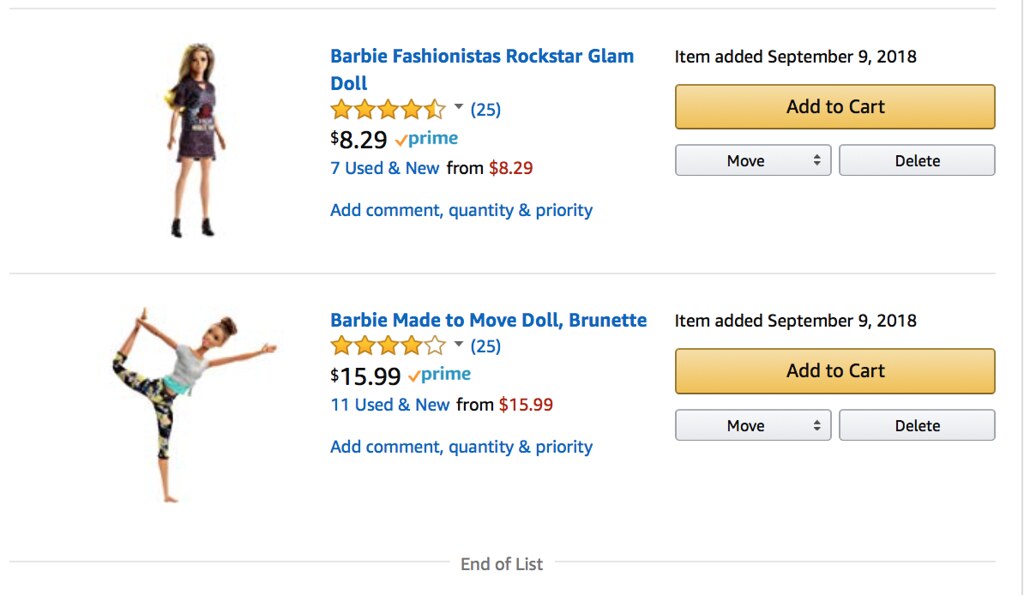 Rockstar Glam Fashionista -I think this doll would be awesome to play the antihero! Not to mention, she looks really cool and her dress is so stylish!

So! That’s my wishlist! I think now is an absolutely terrible time to go around buying new dolls because:

a.) I literally just decluttered / am in the process of decluttering heaps of dolls! Why would I go and buy MORE??

c.) I’ve been going on a HUGE spending spree lately. In fact, I suspect that I might be having a quarter life crisis (is that a thing?) because I have been just going MAD! Seriously -two international trips, high-end makeup, new technology, new clothes, lots of food. It’s not good.

But still. I really want something new. Hmm. Maybe just one or two things…?

Gah. I need to stop looking!

Update: (as of several days later) RIGHT! So I don’t know what the HECK I was doing when I wrote this, I must have been incredibly exhausted because I am a total moron. I was not on the Amazon Australia site; I was on the international site. THE ENTIRE TIME! The prices were all in US dollars. The items were coming from the US.

I take it back, Amazon. You still suck. I can’t believe I actually thought all those wonderful items were available. Ugh. I’m so frustrated at myself for not realising sooner.