Today I’ll be discussing the 2010 film Barbie: A Fashion Fairytale. This movie is definitely my most-watched Barbie film, I think I have seen it a good ten thousand times by now.

Barbie: A Fashion Fairytale was written by Elise Allen, who is known for writing / screenwriting some of the best Barbie films -she worked on Princess Charm School, Fairytopia and Thumbelina, just to name a few. Rob Hudnut, another favourite in the Barbie fandom, also worked on the film as executive producer.

The opening scene is really beautiful; I can’t remember who designed the fashions for this film, but it is my understanding that they used her original sketches throughout the film -including the opening scene. Which is pretty neat!

I remember being terribly confused when I first watched this film, as it starts off as Barbie as the princess from The Princess and the Pea. As soon as Barbie opened her mouth to speak, I was in shock. I felt like crying. Where was Kelly Sheridan? Who was this? This isn’t Barbie!* After I had recovered, my my second thought was ‘what the heck is Queen Ariana doing here?’

*Quick Explanation: Kelly Sheridan was the voice of Barbie up until Barbie: A Fashion Fairytale, when she was replaced by Diana Kaarina. There was so much protest regarding this that Sheridan came back in 2012 for Barbie in a Mermaid Tale 2. Not that Kaarina isn’t a good actress or anything, it’s just that Sheridan is the voice that is most associated with Barbie.

In 2016, Sheridan was replaced with Erica Lindbeck, who remains as the voice of Barbie today.

It turns out that Barbie is filming her new movie “Barbie: The Princess and the Pea.”

The film starts off with Barbie having The Worst Day Ever. Not only does she get fired, but her longtime boyfriend Ken breaks up with her. Feeling down, she jets off to Paris to visit her Aunt Millicent. Barbie resolves to quit acting -if people don’t like her work, why should she continue?

While she is on the plane to Paris, the song Another Me, begins to play, which, if you ask me, is the best song in the film (and there are lots of good ones). Not only are they really nice to listen to, the lyrics are especially powerful -my favourite line is “one small trip and fall; makes the evening news,” because it really sums up Barbie’s situation. Since she’s so famous, everyone has found out about her being fired, which makes her feel pretty rubbish.

Other songs in the film include Get Your Sparkle On, performed by Rachel Bearer (who also sings the theme song from Barbie in the Pink Shoes) and Life is a Fairytale, performed by Tiffany Giardena, who later sung as Keira in Barbie: The Princess and the Popstar. Overall, I think this film has some of the best music so far. 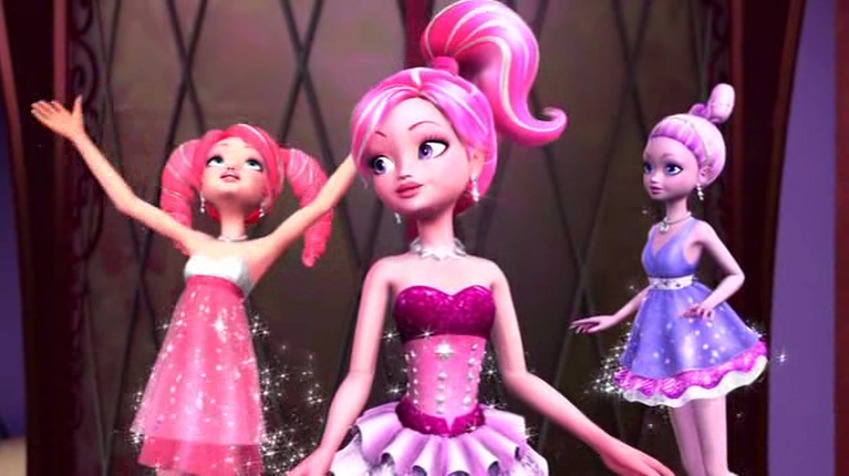 Barbie’s Aunt Millicent is a fashion designer, but her work just isn’t selling anymore, so she’s moving to the country, much to Barbie’s dismay. Aunt Millicent explains that people just don’t like her work anymore, so there’s no reason to continue. Barbie is introduced to Millicent’s assistant, Marie-Alice. She’s shy, but it doesn’t take Barbie long to befriend her.

Barbie and Alice discover an ancient, magical wardrobe called The Glitteriser, which can add sparkle to any ‘worthy’ outfit. The Glitterisier is operated by three magical creatures, called flairies. Barbie, Alice, Millicent and the flaries work together to create a whole new fashion line to save Millicent’s fashion house.

In the end, Barbie and Ken get back together, Millicent’s fashion house is saved and Barbie is offered a new job.

I think Fashion Fairytale does something really unique here -it references other films. For example, Barbie says “when I did the three musketeers,” and looks at a poster from Barbie in a Mermaid Tale. I think this is really important and helps to reinforce the fact that when you watch Barbie and the Three Musketeeers, you aren’t watching Barbie, you are watching Corin (who is “played by” Barbie). If that makes any sense?

In the film, we see that Barbie’s friends are Nikki, Grace and Teresa. This film is really where the ‘evolution of Teresa’ begins. Before Fashion Fairytale, Teresa was nice. Quiet. Likes reading. Shy. Loves animals. The definition of “sweet.” (These attributes were listed in a 2009 book where Barbie profiles her friends). Anyway, in Fashion Fairytale, Teresa is ditzy, a bit odd and “the loveable goofball friend.” This new version of Teresa continued on into Life in the Dreamhouse.

Overall, I think the animation was really nice (at first glance, I thought Barbie’s eyes were a bit too big and spaced out, but I got used to it by the end), and the clothes were fantastic. I love the overall aesthetic of the film and the colours used were really nice. The storyline was great, and I love-loved the humorous scenes with Ken. Not a single scene was boring and I loved how Barbie’s character was quite “deep” (for lack of a better word). I think this film did a fantastic job of showing the audience how Barbie is a “real person”, with real emotions, who makes real mistakes.

Should you buy it?

Yes. Absolutely. Considering this film is quite old now, I can generally find it for only $12 (sometimes even less!), which is the price of lunch for one person. I promise you will rewatch this film again and again!*

*But probably not as many times as I have.

One thought on “Barbie: A Fashion Fairytale (2010) Review”