Remember the big rebrand of 2015? The first rebranded doll I ever saw was over Easter, which was quite late in the year, considering they had been out in the US for some time. It was the 2015 Fashionista Teresa, and I bought her immediately because she was just so pretty. A year later, I sold the doll (but kept the outfit) because I realised she was actually a bit ugly. And I only had one pair of flat shoes at that point. 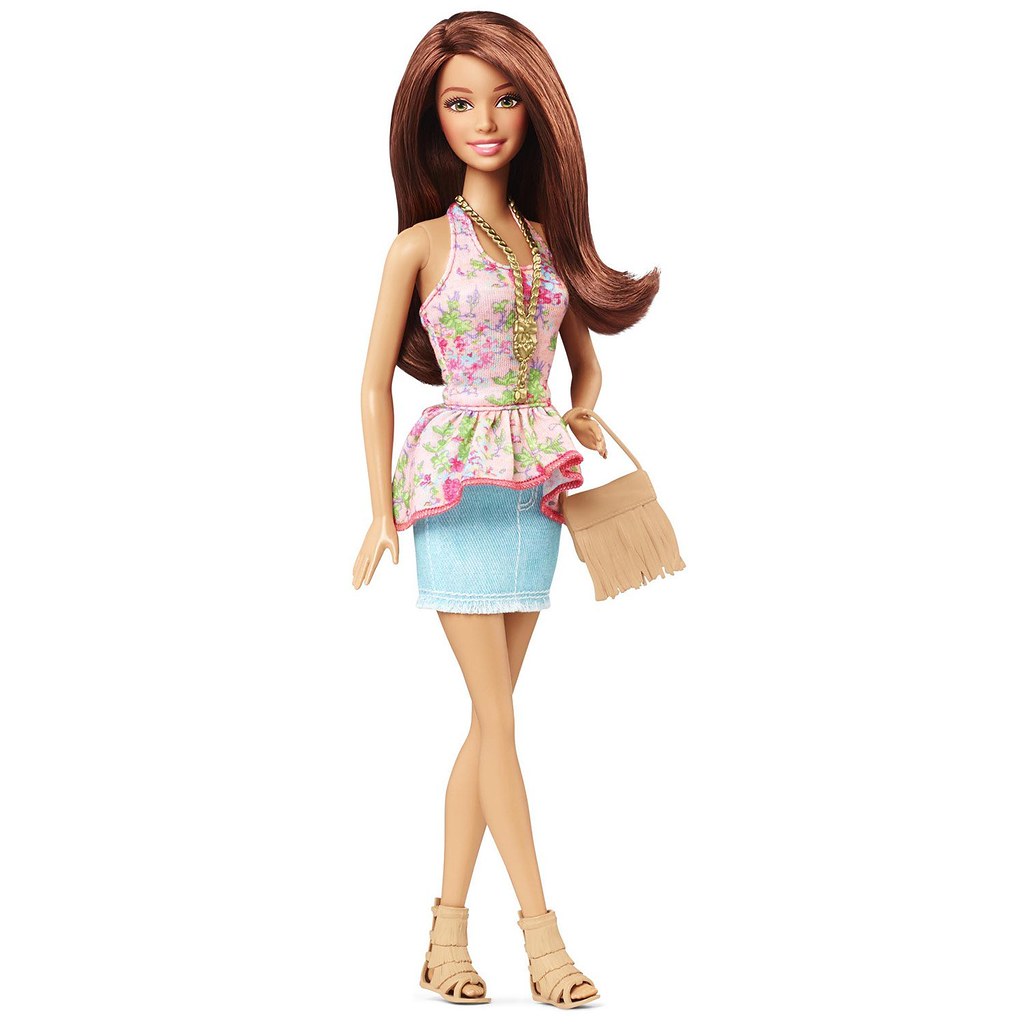 Okay -she does look quite nice and sweet in this promo pic. But she was not sweet in real life! She was terrible to photograph and her stupid stiff knees meant she kept falling over.

In 2014, I bought a 2013 “Tropical” Fashionista Raquelle. I only bought her because I didn’t have a Raquelle yet, and I liked her earrings in the promo pictures.

I wasn’t very keen on this doll because she was unarticulated, and I was horrified they had stopped making those ones.

I ended up selling this doll, too. And guess what? She didn’t come with the earrings. #Cheated 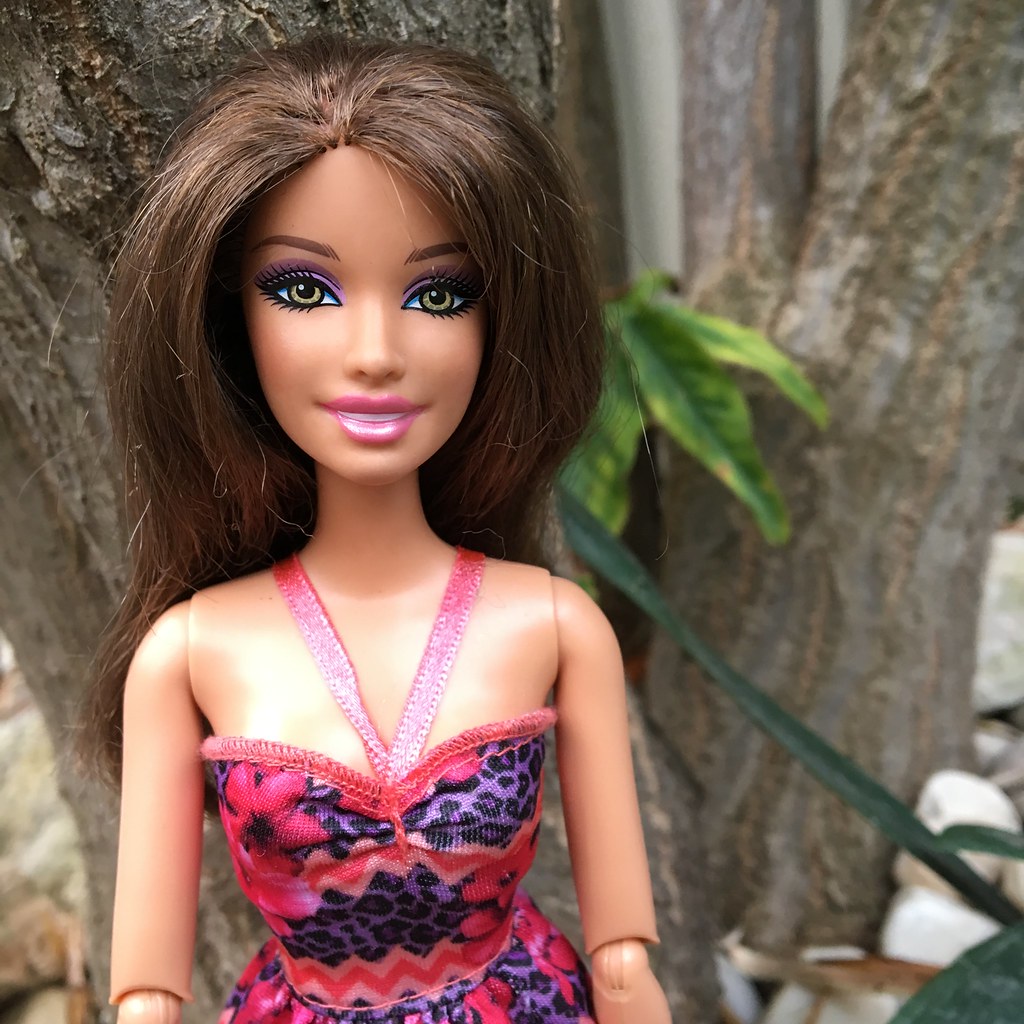 Today Holly will be modelling Raquelle’s outfit. I sold the shoes, so she’s wearing a different pair instead. 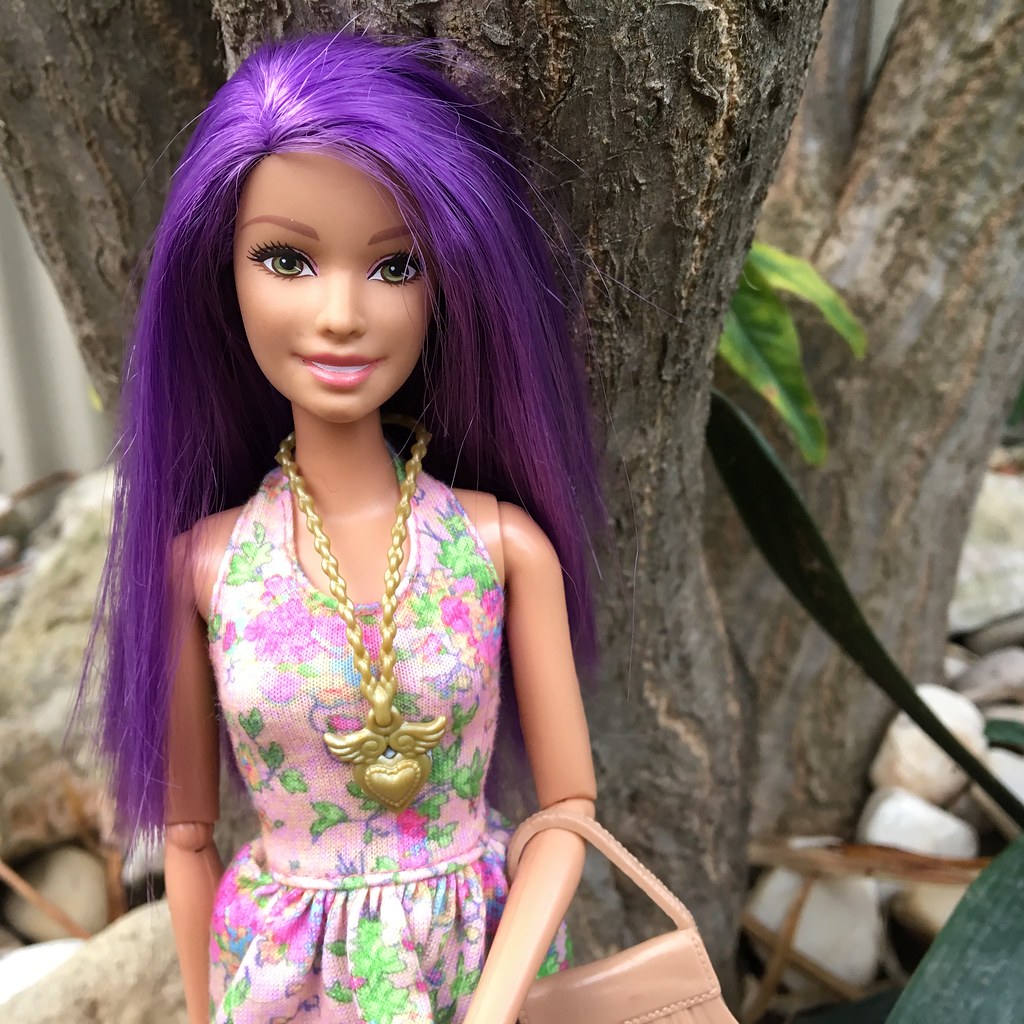 Danika will be modelling Teresa’s outfit. I sold her shoes (and Danika can’t wear flats, anyway) so she will be wearing a different pair. I sold / lost the necklace, so she’s wearing a similar one instead. 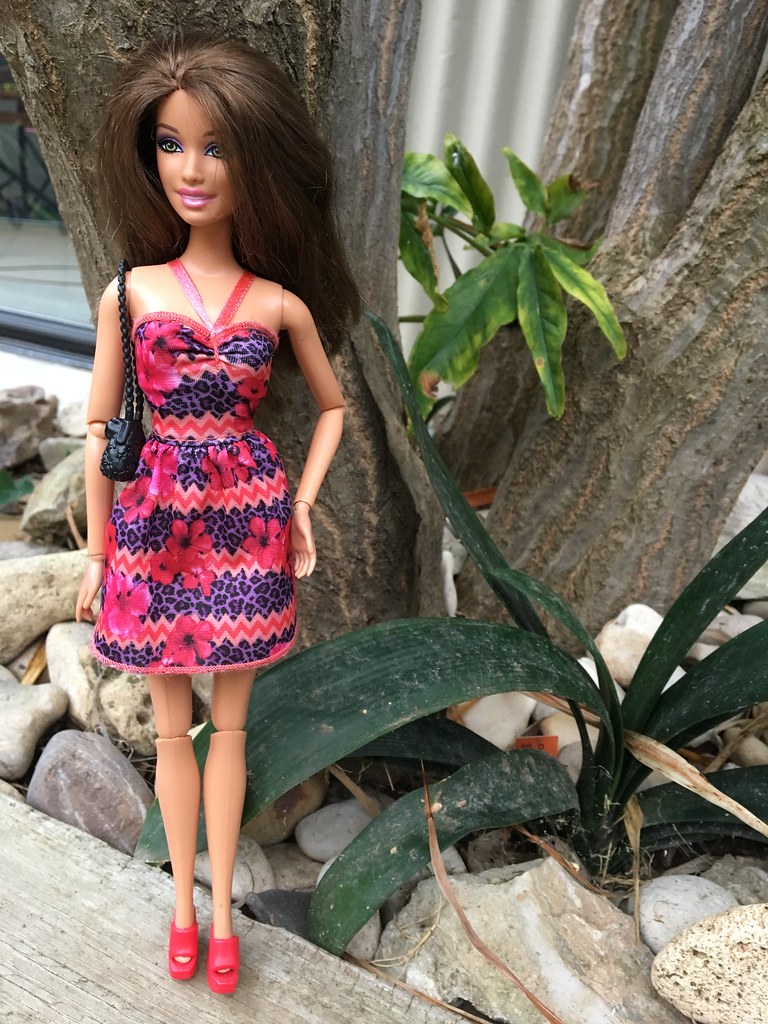 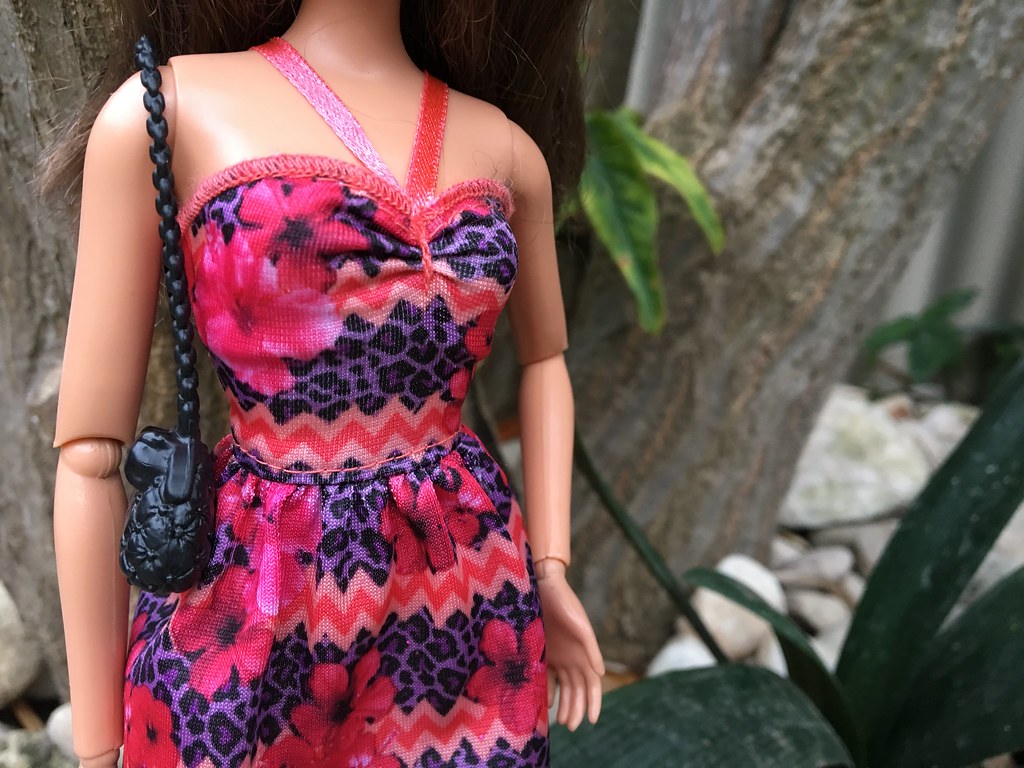 It’s interesting how they combined leopard print with tropical flowers. 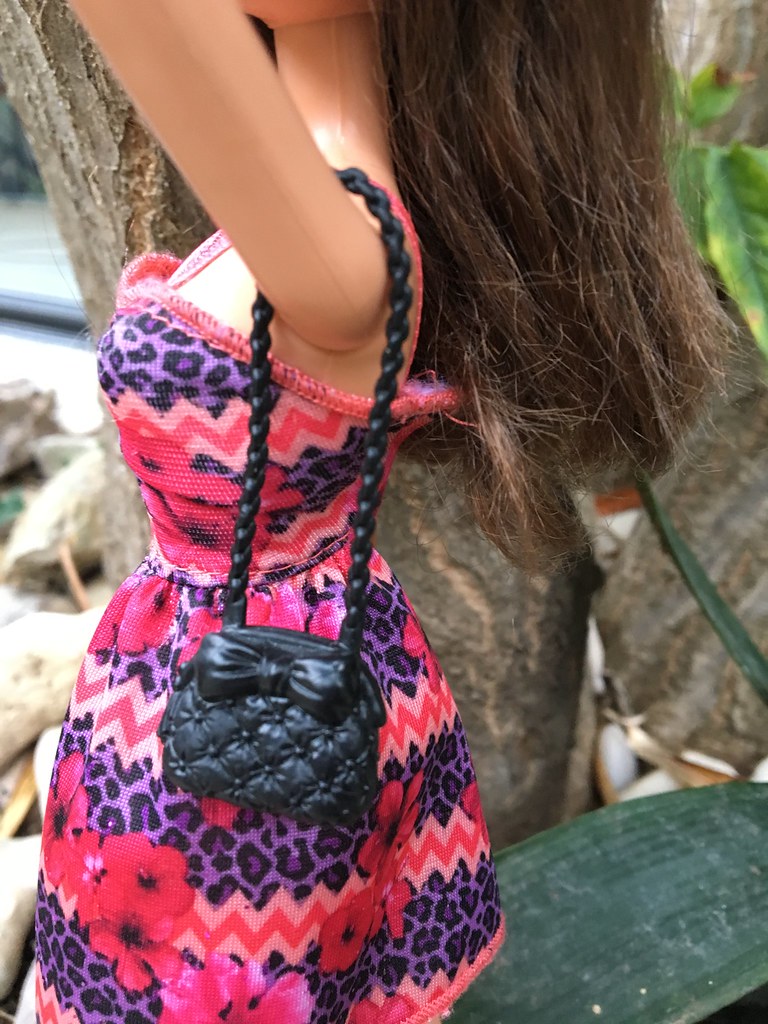 The purse is cute, with lots of detail, but I barely use it. Actually -I barely use purses at all. 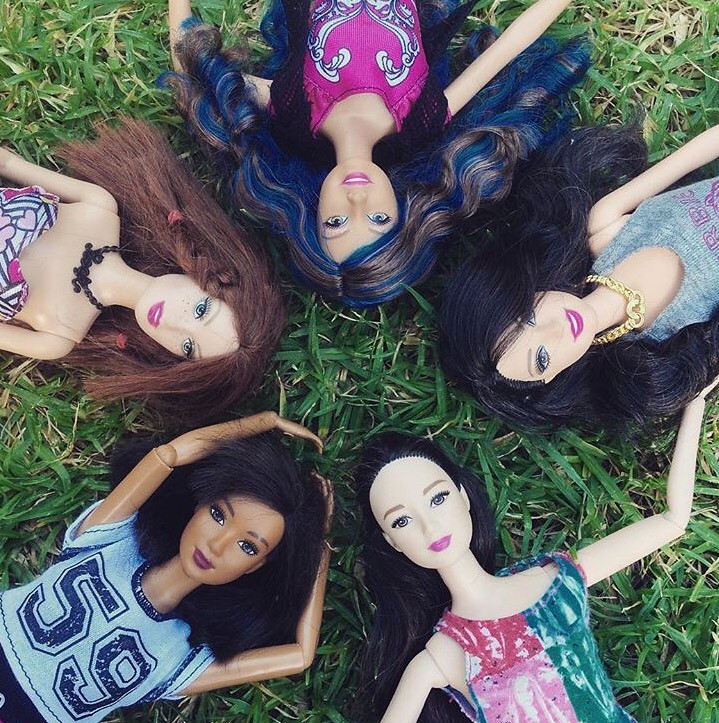 Hark! A rare photo of Raquelle! (middle on the right) 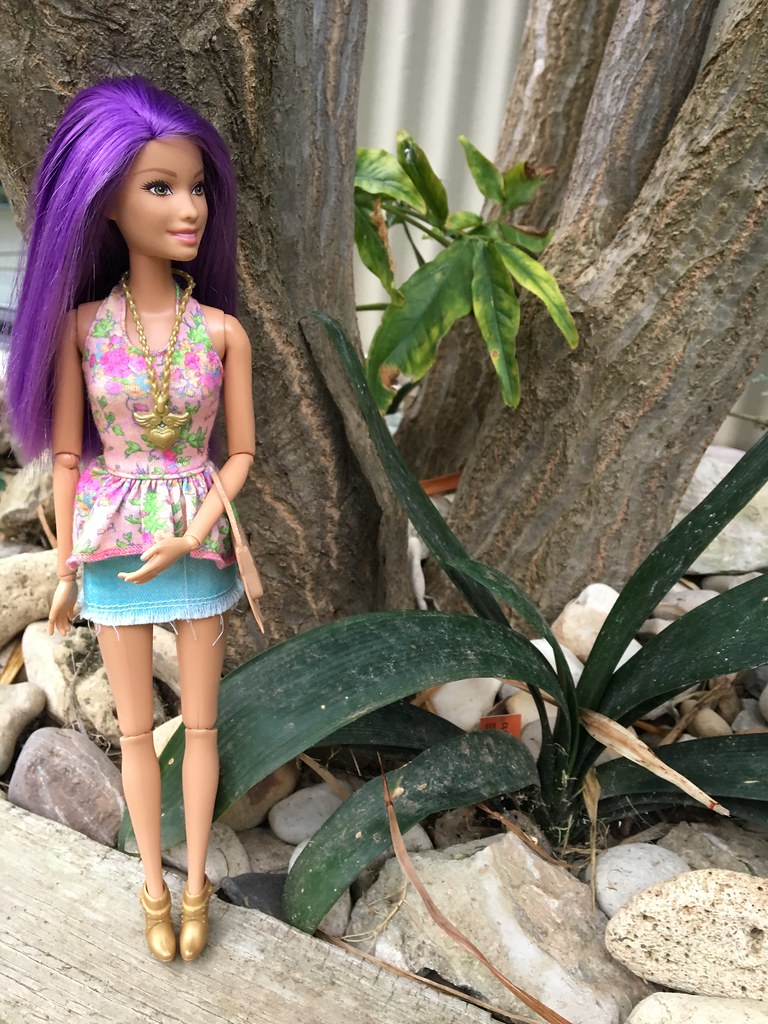 And here’s Danika. I’m not sure what shoes she’s wearing, but aren’t they cute? Little gold ankle boots are the best kind of boots. 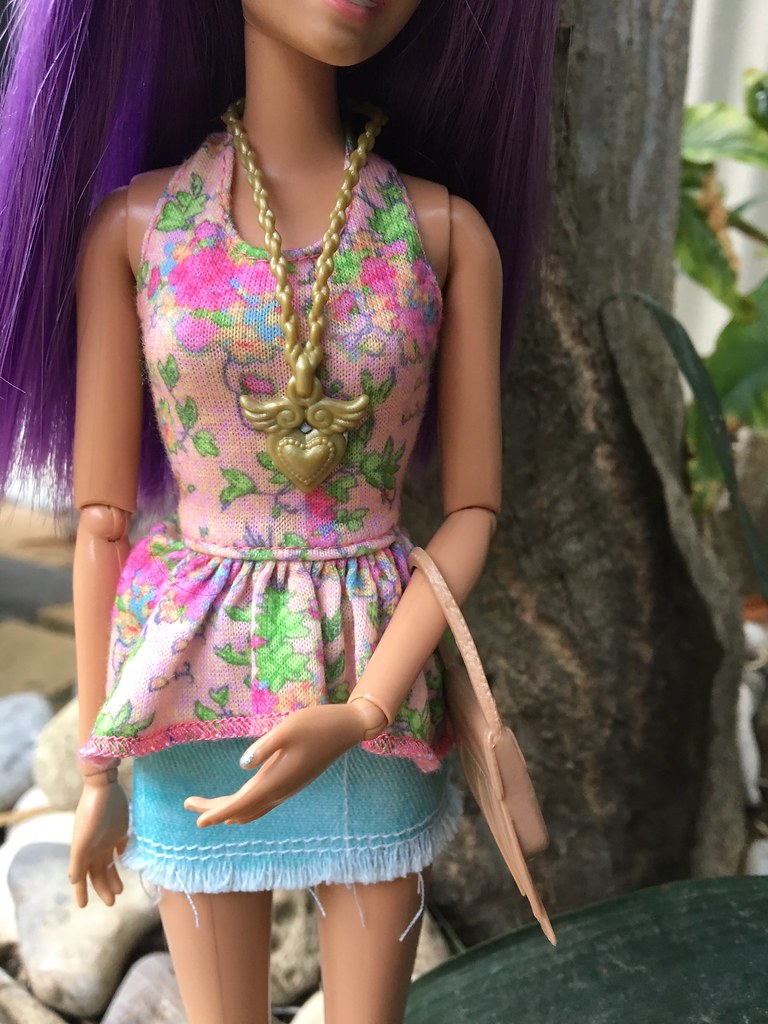 The shirt is patterned on both sides as well. The floral pattern is really cute and sweet. 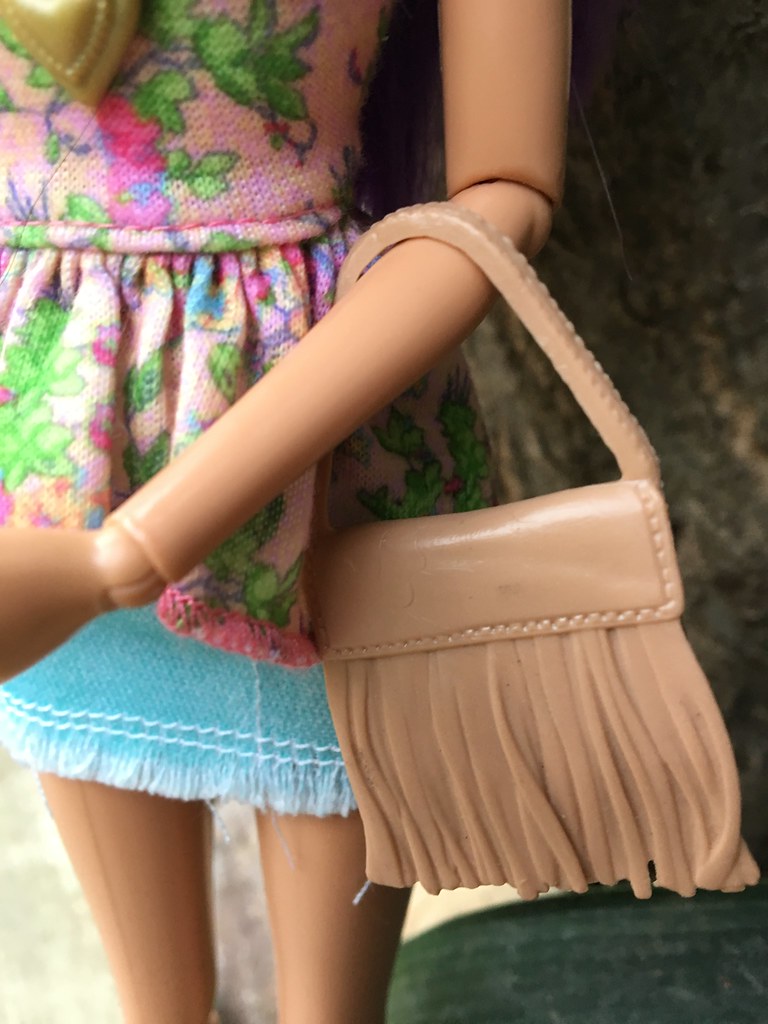 The bag is a bit …meh. It suits the outfit, I guess, but it’s not really my style. 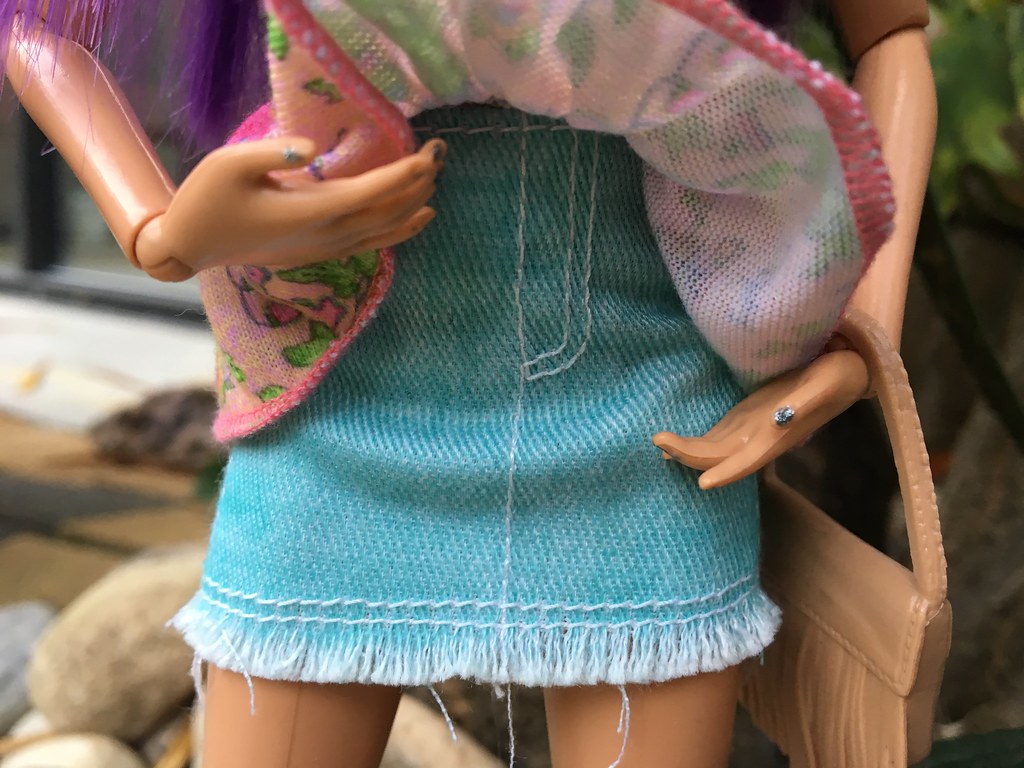 I like the stitching on the skirt. It looks perfect for a beachy outfit! 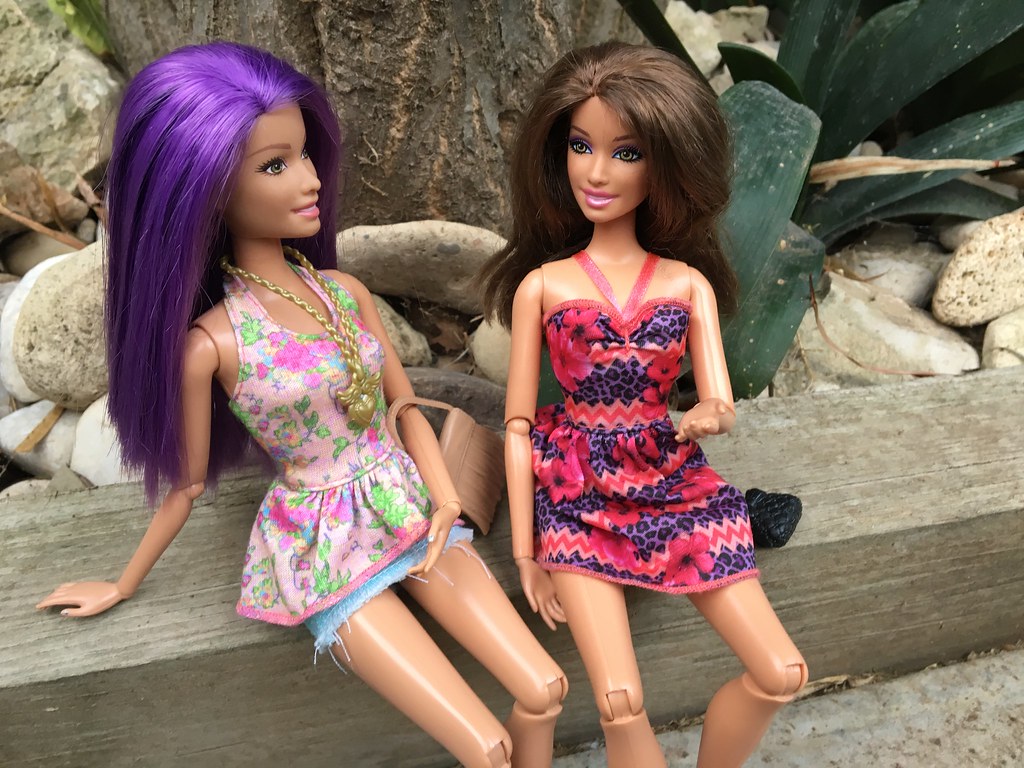 Here are the girls together.

The next outfit will be from the 2015 Kenzie Fashionista. I remember being really excited when I saw her, because she was the one from the ad, and look at that curly hair!

I ended up selling her, too. Her stiff legs were annoying and her hair got all messed up. I also sold the shoes and the purse. Since Danika was wearing the gold necklace (see above), I swapped it out for another one. 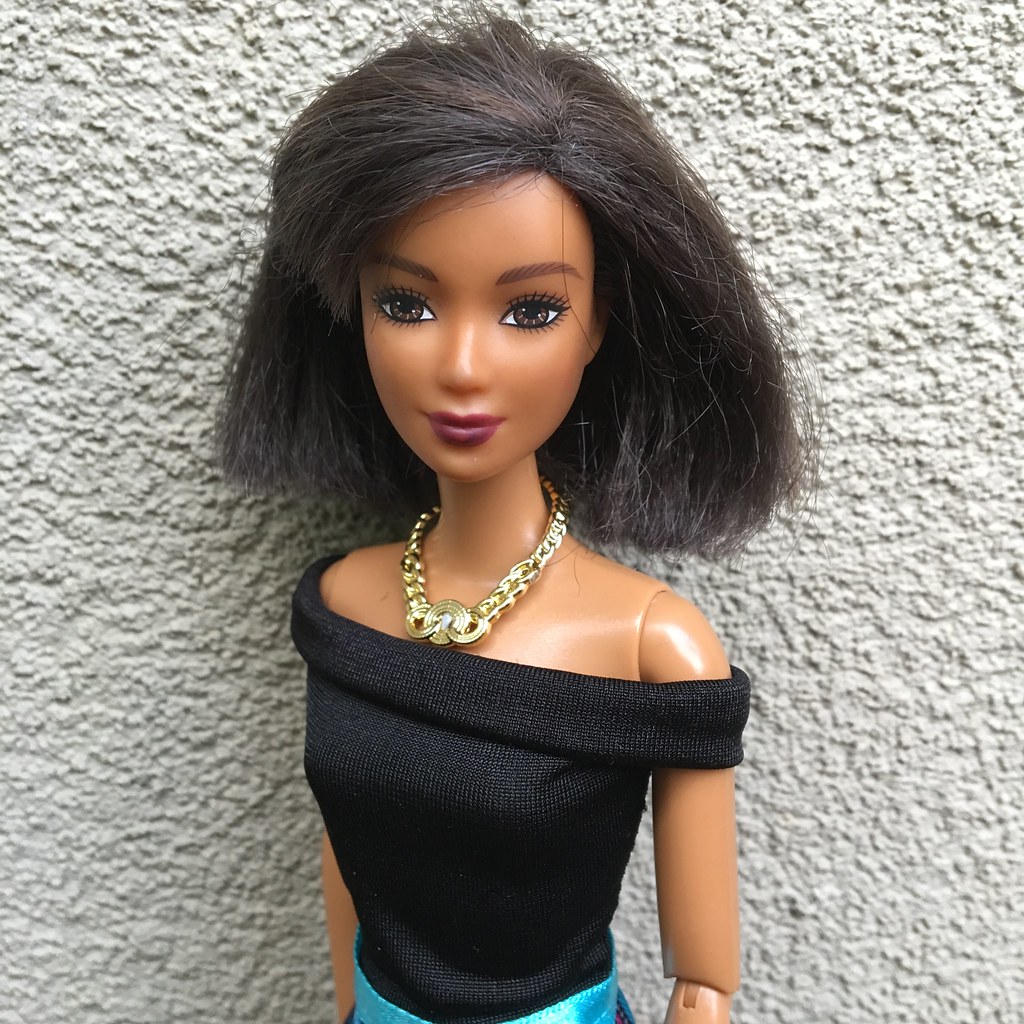 Our next model will be Kayla. 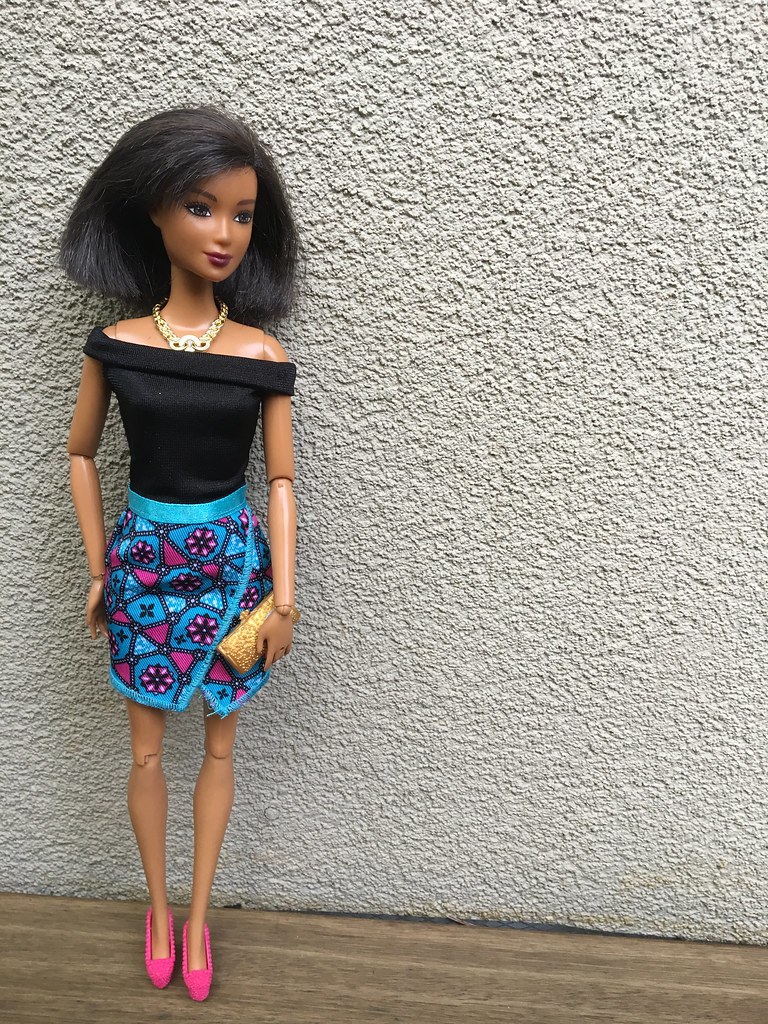 I really like this outfit with the gold accessories, and I think the pink shoes are such a lovely pop of colour. I can’t remember where I got these shoes from -maybe an accessory pack in 2015? I got one for my birthday, and it came with all these cheap-looking necklaces and bags that I never use. 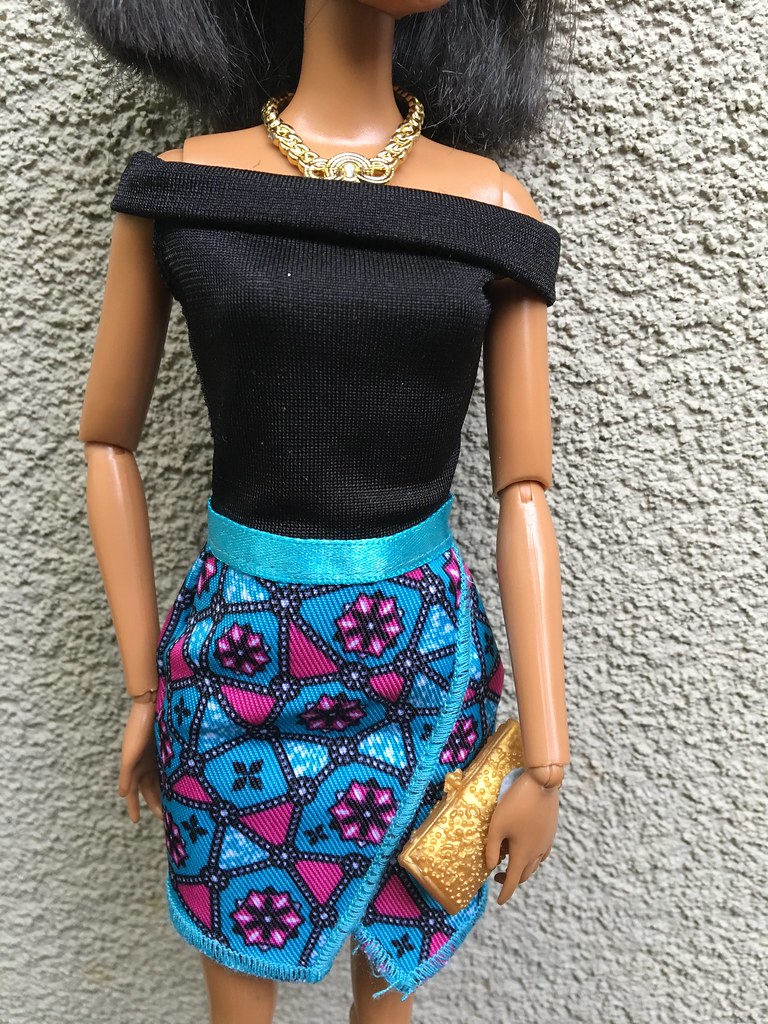 Here’s a close up of the dress. The style is really unique, I don’t have another dress like it. The fabric is so smooth and soft, too. 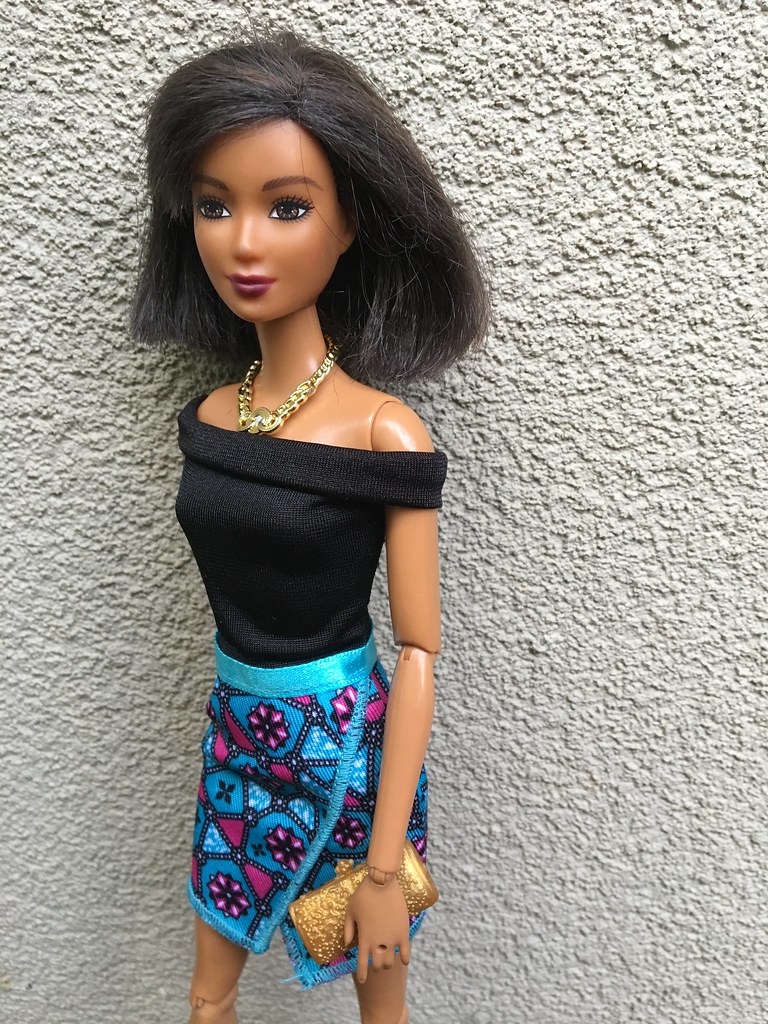 The pattern on the skirt goes all the way around. Yay!