I saw something new today! The Barbie Careers: Ice Skater, who I have been looking for for ages recently -but an AA version! Honestly, it’s terribly rare to see an AA Barbie in my city, so this was a great surprise (I think this was the only non-white doll in the whole store, actually). I didn’t buy her, just because I didn’t have any money on me.

I suppose that’s a good thing, because once this ice skating phase is over, what am I going to do with her? 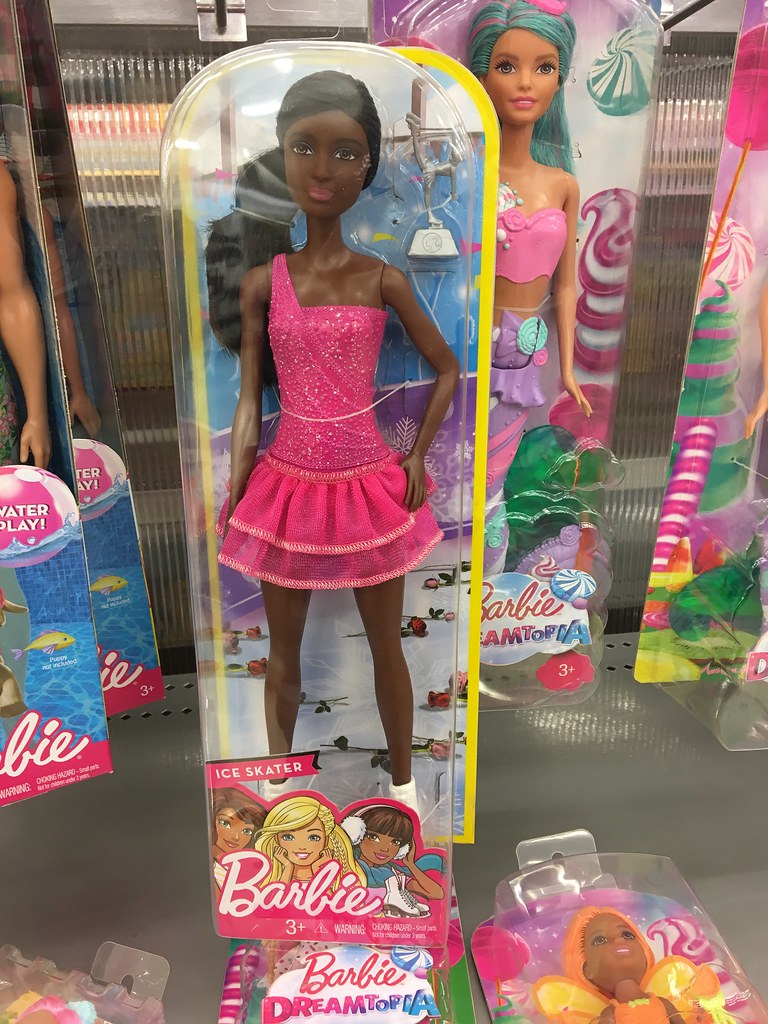 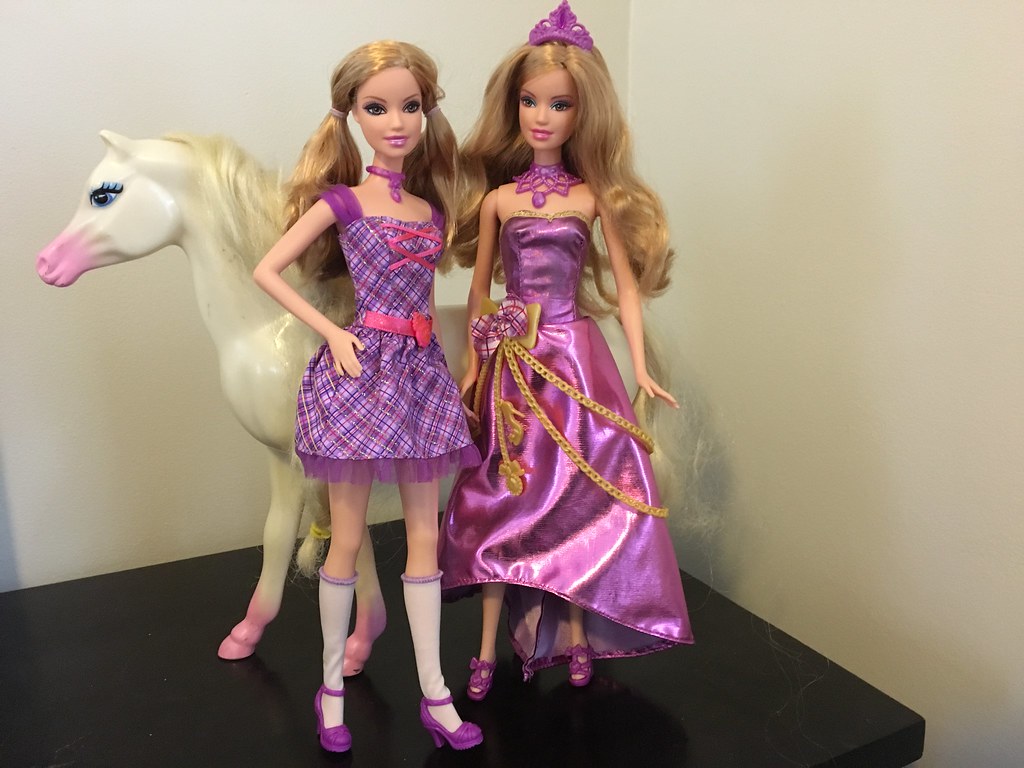 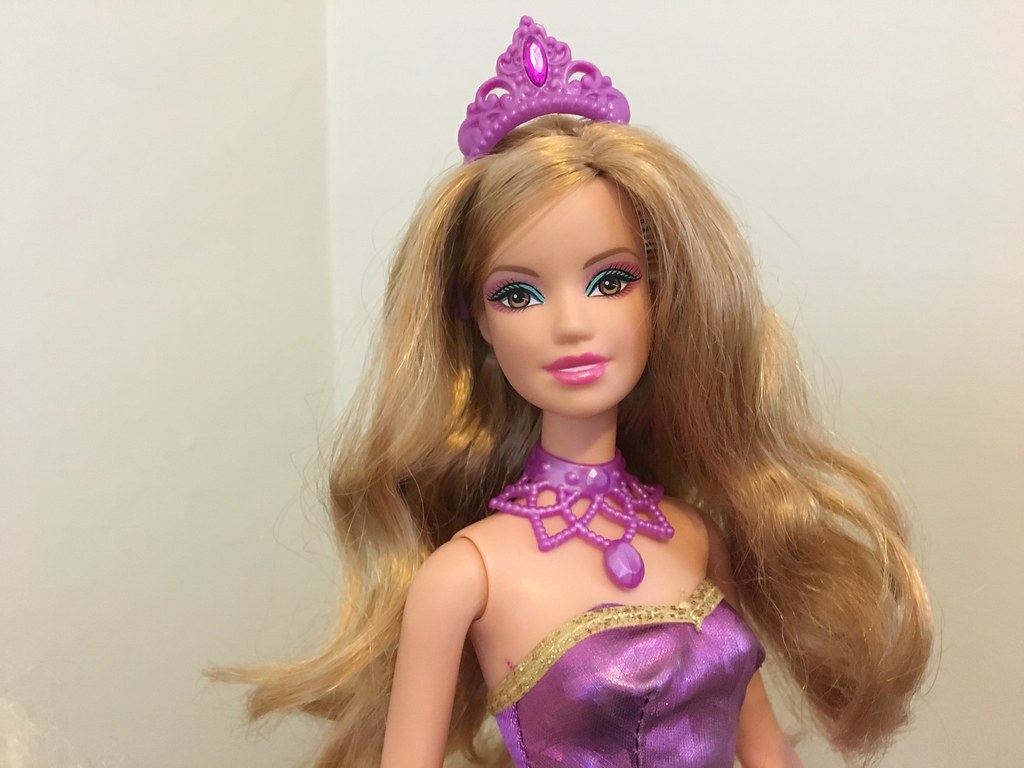 This is the Graduation doll. She was $16, and I got her in 2014, despite the movie coming out in 2011. I was very shocked to see her, but her box was all dented and she was marked down, so she must have come out from a storage room somewhere.

Her tiara is a weird shape so it doesn’t sit properly in her hair. Oh well. Her golden hair is absolutely beautiful, I love the soft curls. I love her necklace, too -so elegant!

And her face! I think her makeup is just beautiful. Perfect for a princess!

The reason her tiara is more elegant than the ‘schoolgirl’ one is because, in the film, princesses don’t receive their proper tiaras until Graduation. Until then, they use plain ones. 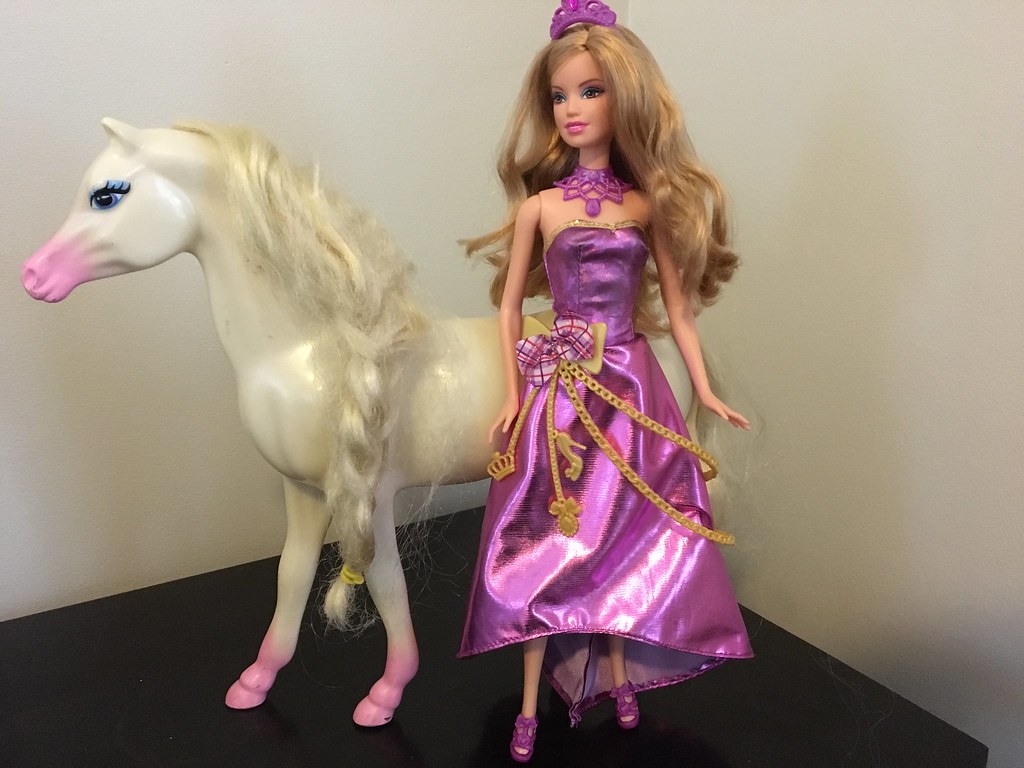 Her dress is just beautiful. It’s so shiny, and I love how similar it is to the film. 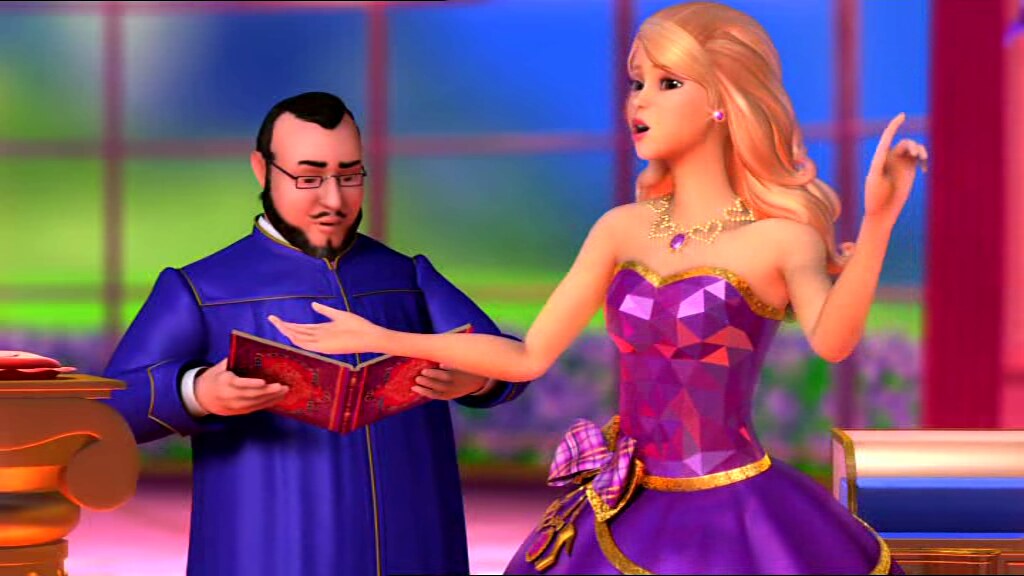 It’s just as shiny as in the film! Delancy wears a different necklace in the film, but both are nice, so it doesn’t really matter. 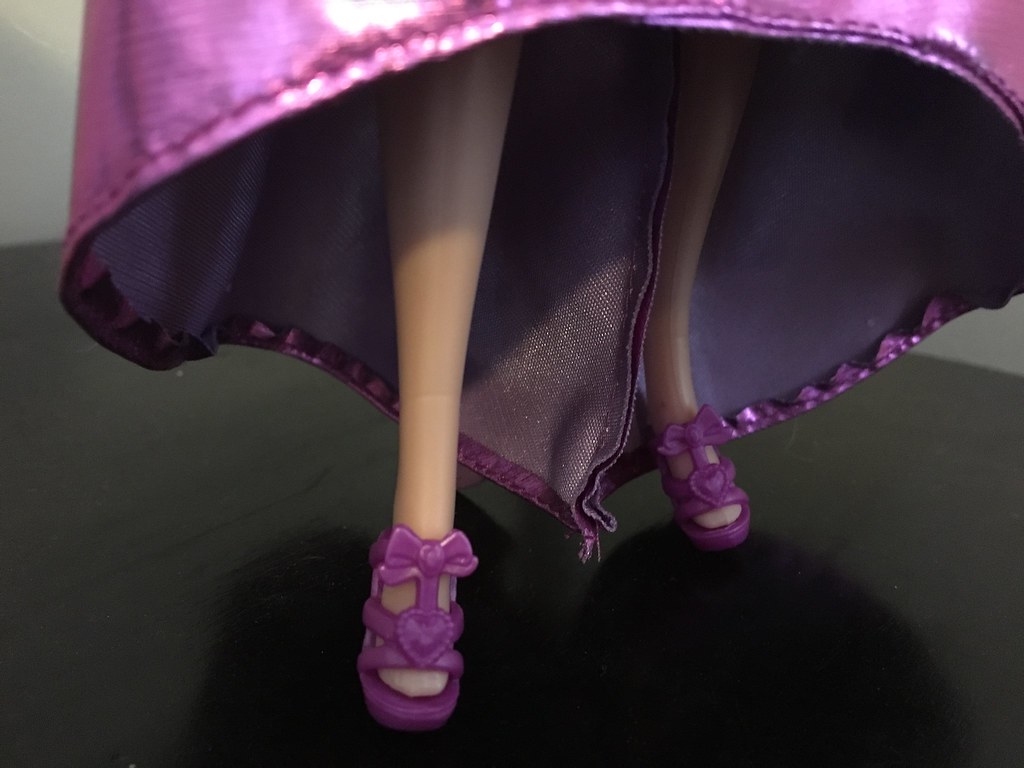 Her shoes are a bit small for her feet, so they’re always falling off. They’re cute little sandals though -I like it how they added the gems around the heart, and the detail on the bow. I love it when extra details are added; it would have been so easy for Mattel to just give her plain ol’ purple shoes, but they didn’t, and that’s what I love. 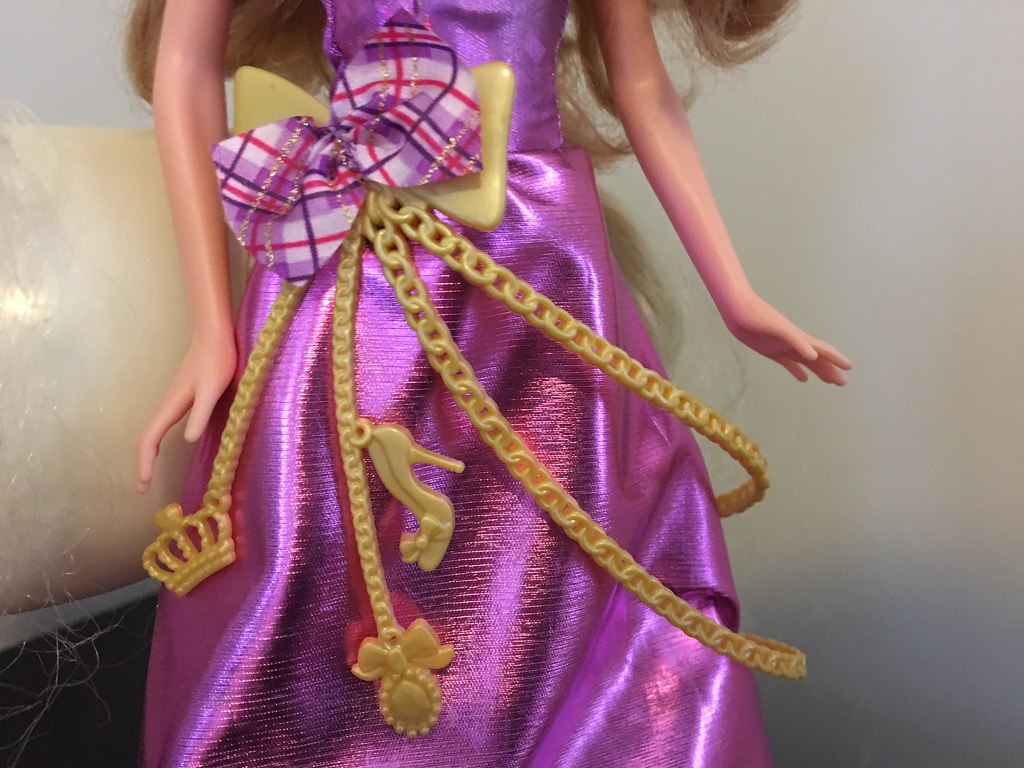 The detail on the dress is so impressive! I love the gold chain, and the plaid print on the bow.

Fun fact: Delancy was originally Blair’s best friend, instead of the enemy, and she was the ‘music princess.’ That’s why they produced a doll of Delancy instead of Isla, and why Delancy is featured all over the merchandise. Originally, it was Isla who was going to be the villain, that’s why you see her talking to Portia in the still images. 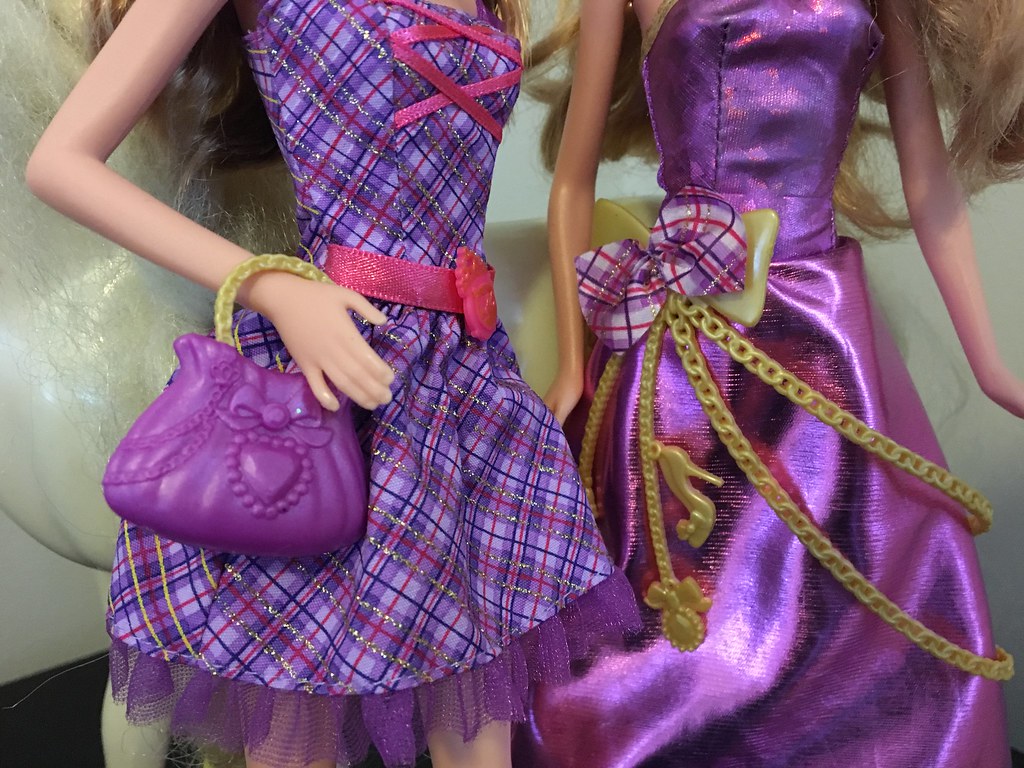 Here’s the bag that came with the doll. I like how the strap is gold, rather than pink, and I like how it’s a good, useful size. So royal! 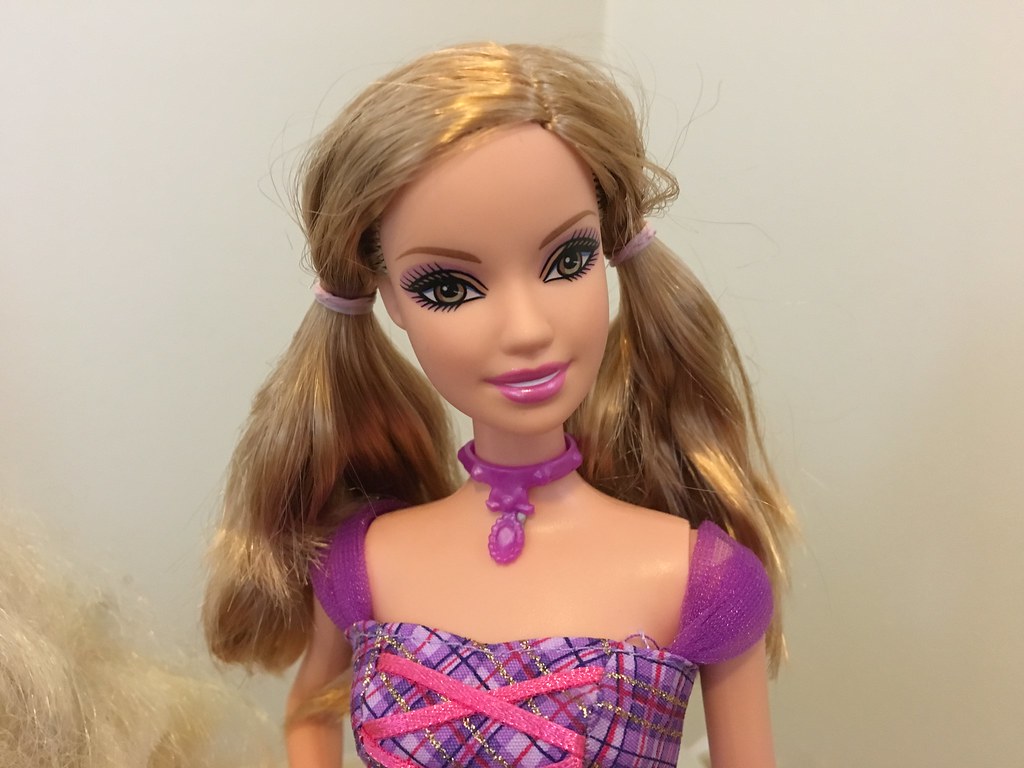 This next doll I purchased in 2016, for a Christmas present (for myself, lol). She was $20 + $10 shipping from eBay. I would never pay that in the shops, but since she’s such a special doll, I made an exception.

Since I already have a Delancy doll, I named her ‘Mary-Anne,’ after the Babysitter’s Club. And yes, I am aware she looks nothing like the character.

I don’t like her face as much. Her makeup is much simpler, as expected, since she is just the ‘everyday schoolgirl’ doll. I’m not a big fan of her pigtails, either, but I understand recreating her fancy updo in the film would have been quite difficult (this is a playline doll, after all!) so I guess pigtails had to do. But surely it wouldn’t have been that hard to make a simple bun?

Her choker is nice and plain. I’ve never (not once!) used it in a different outfit, though. The bright purple colour makes it a bit difficult. 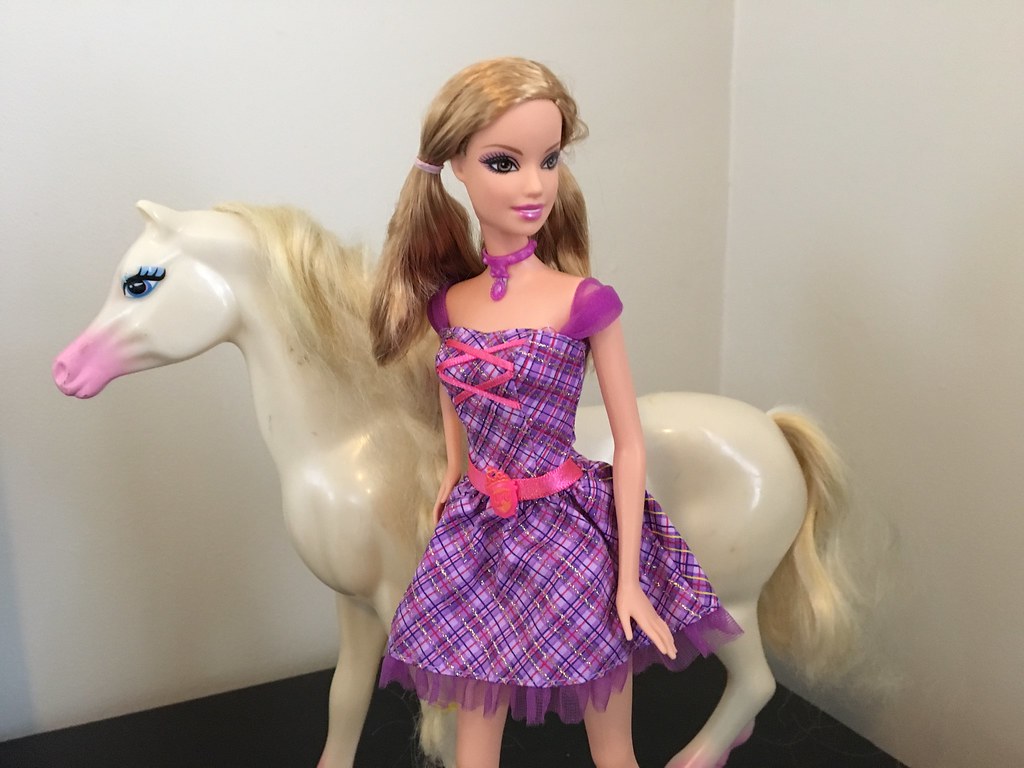 Her dress is beautiful, I love the pattern with the cute little details. 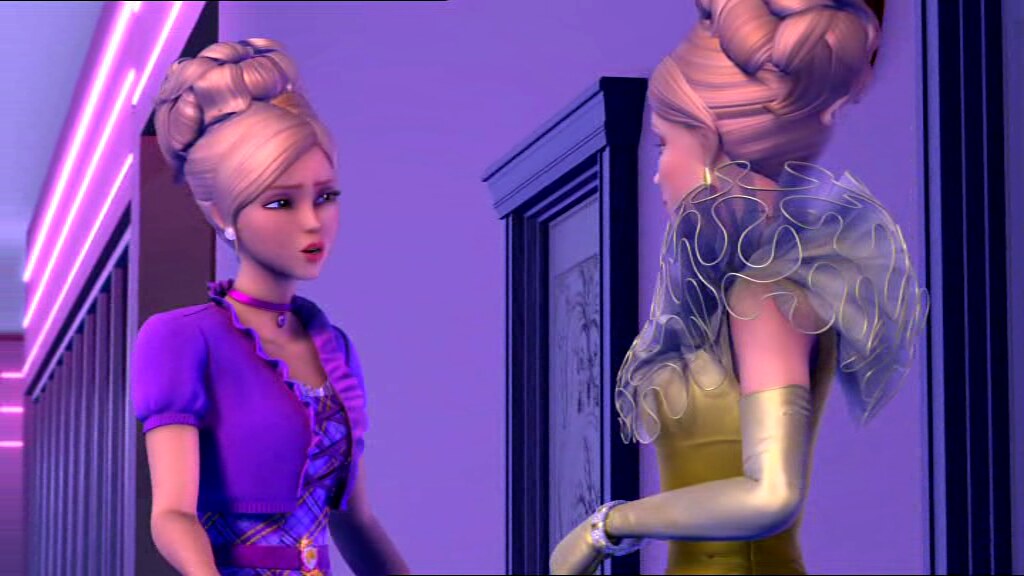 This is how her dress looks in the film. The doll didn’t come with the jacket, which I think is quite a shame, but everything else is similar. 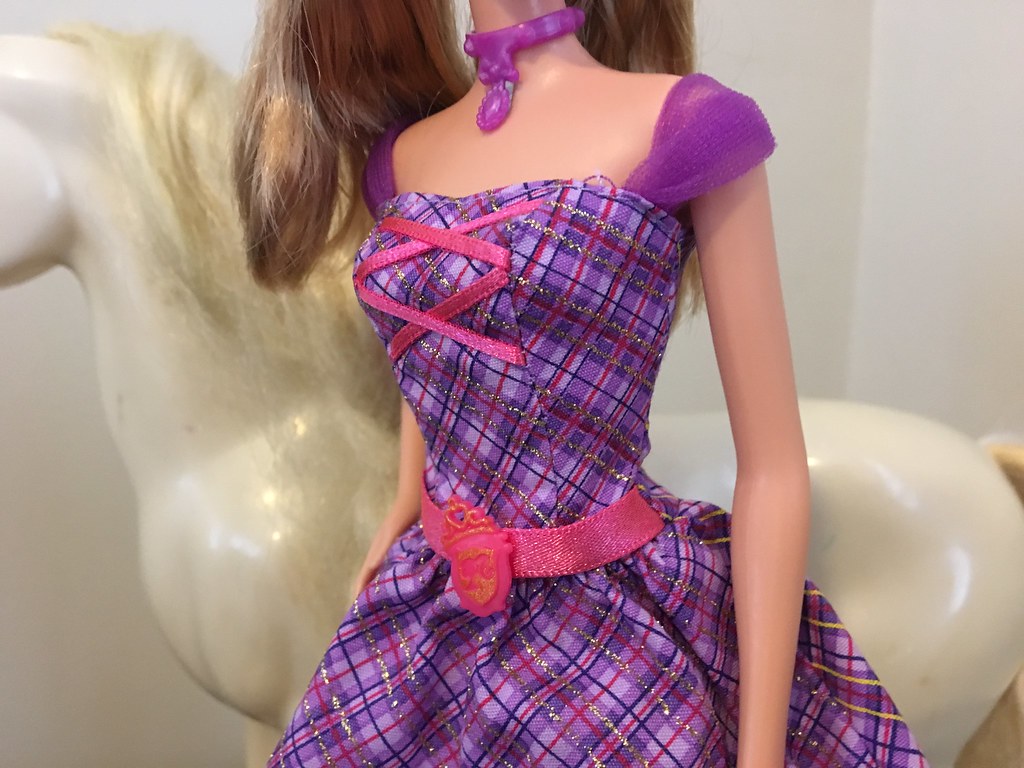 The belt doesn’t go all the way around, but the pattern does. 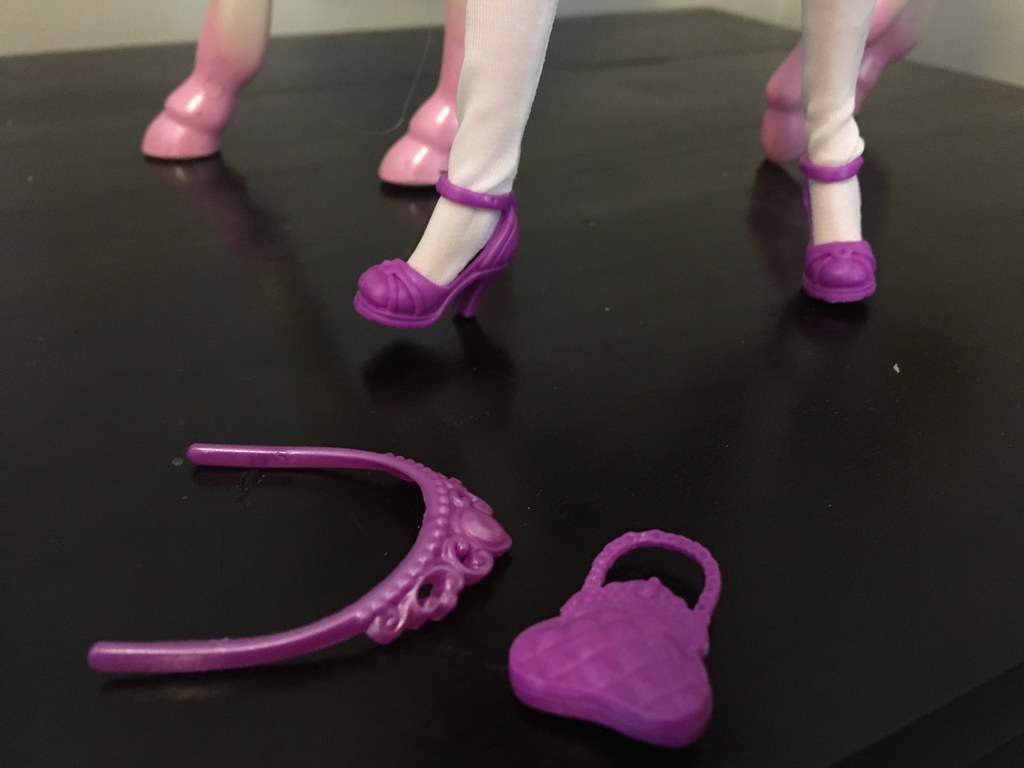 Her tiara is quite an odd shape, so it doesn’t sit well on her head at all. I couldn’t even do it for the photo! Her purse is rather small and surely can’t hold very much. Not even a mobile phone! However, it has some nice ‘royal’ details on it, and I suppose princesses don’t need to carry their phones on them.

Her shoes are very “proper.” The strap around the ankle makes them extremely difficult to take off and on, so they usually just stay on.

I love the socks, I’ve never had Barbie socks like this before. I’m glad they included real fabric, instead of just making a plastic sock. 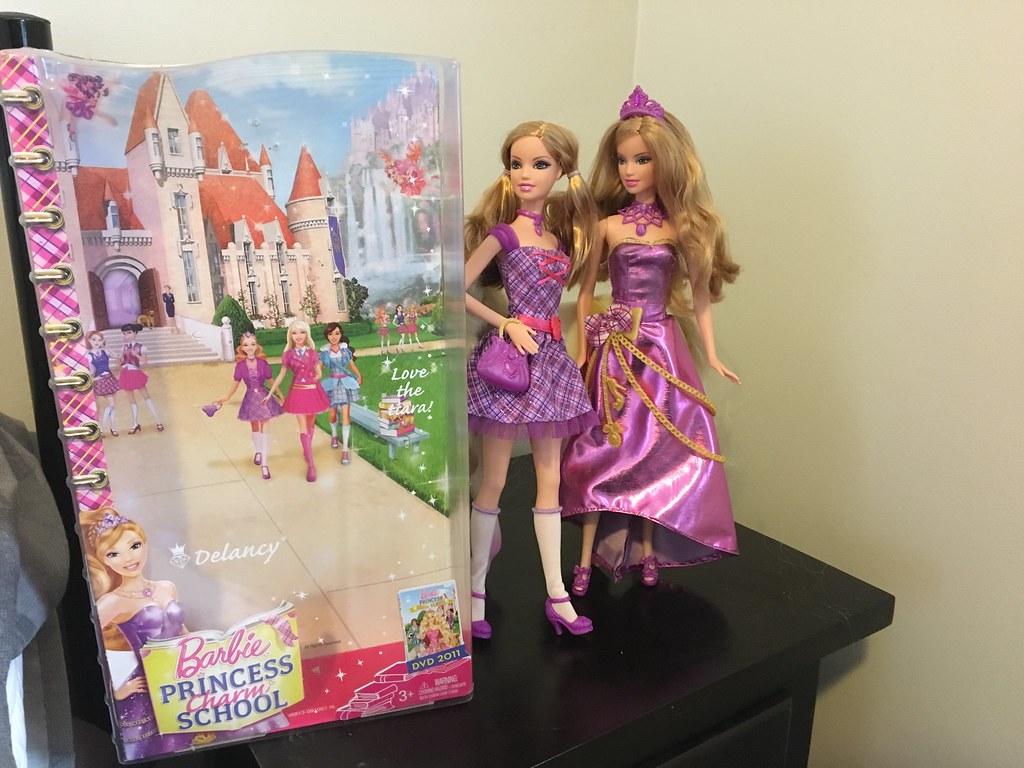 This is the box for the Graduation doll. The Schoolgirl doll had very similar packaging, but a bit smaller. Isn’t it beautiful? I’m such a big fan of pretty packaging, and this one is a special favourite. They went to such an effort! 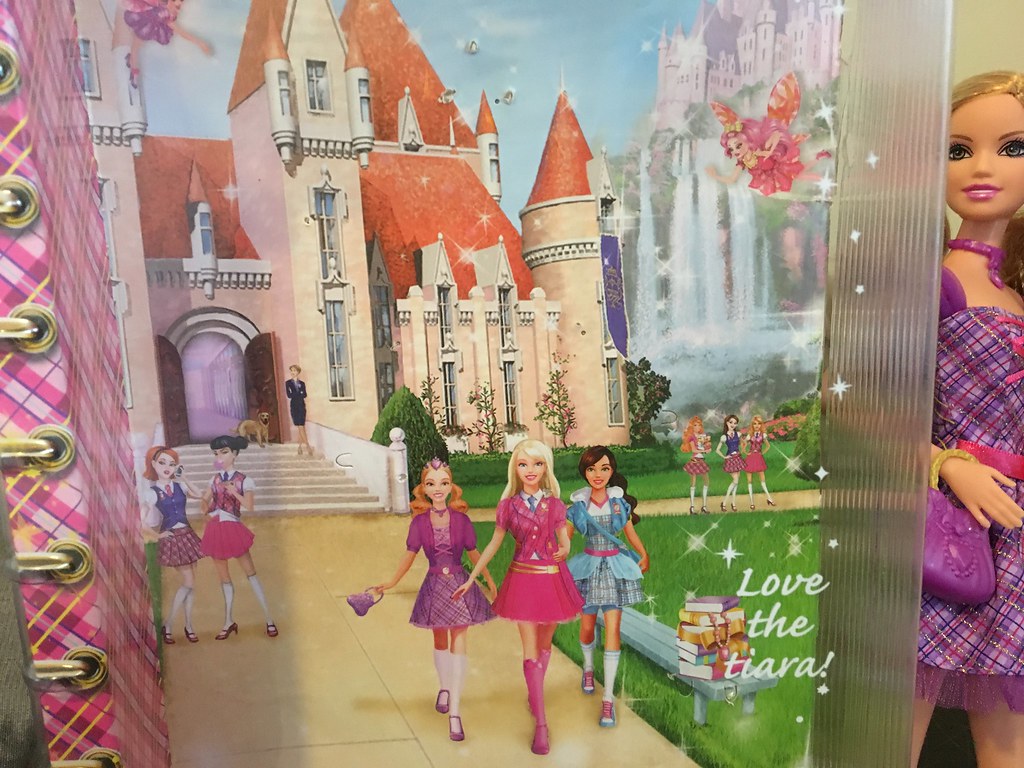 A close-up of the packaging. You know what would be awesome? If the doll included a paper fold-out picture of the school, so you could use it as a backdrop. I think that’d be such a lovely addition! And on the back, they could showcase all the other products in the line. 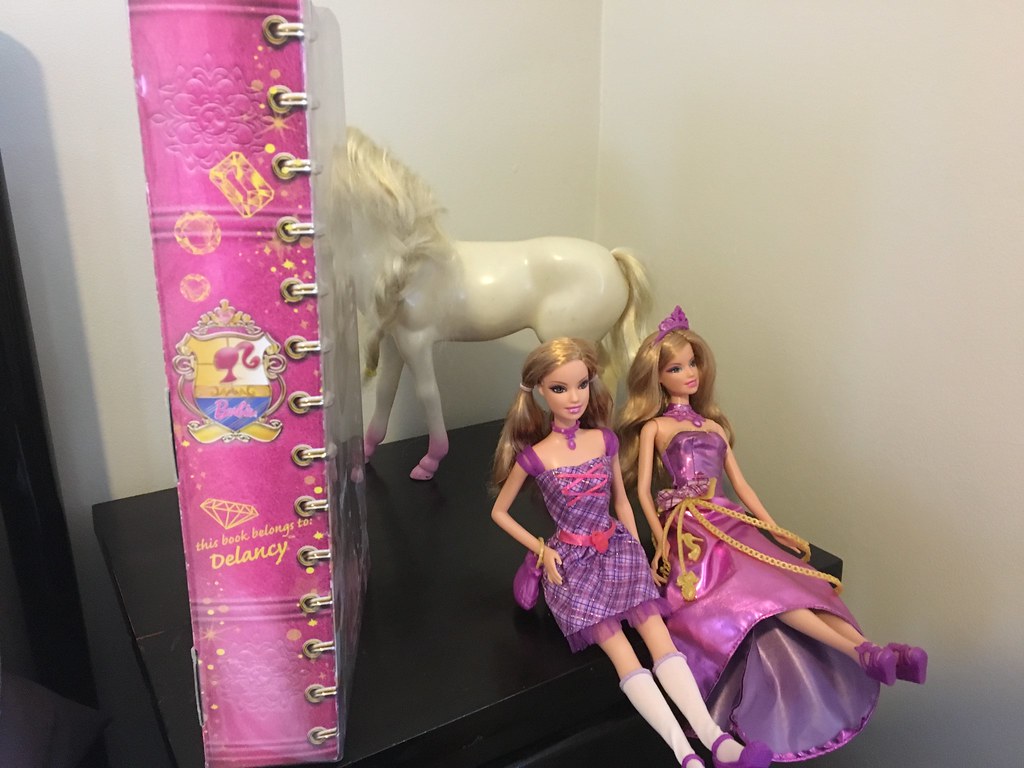 The side of the box is probably my favourite part. There’s no use in showing you the back because it’s all ripped off. That’s why I got it cheaper haha. 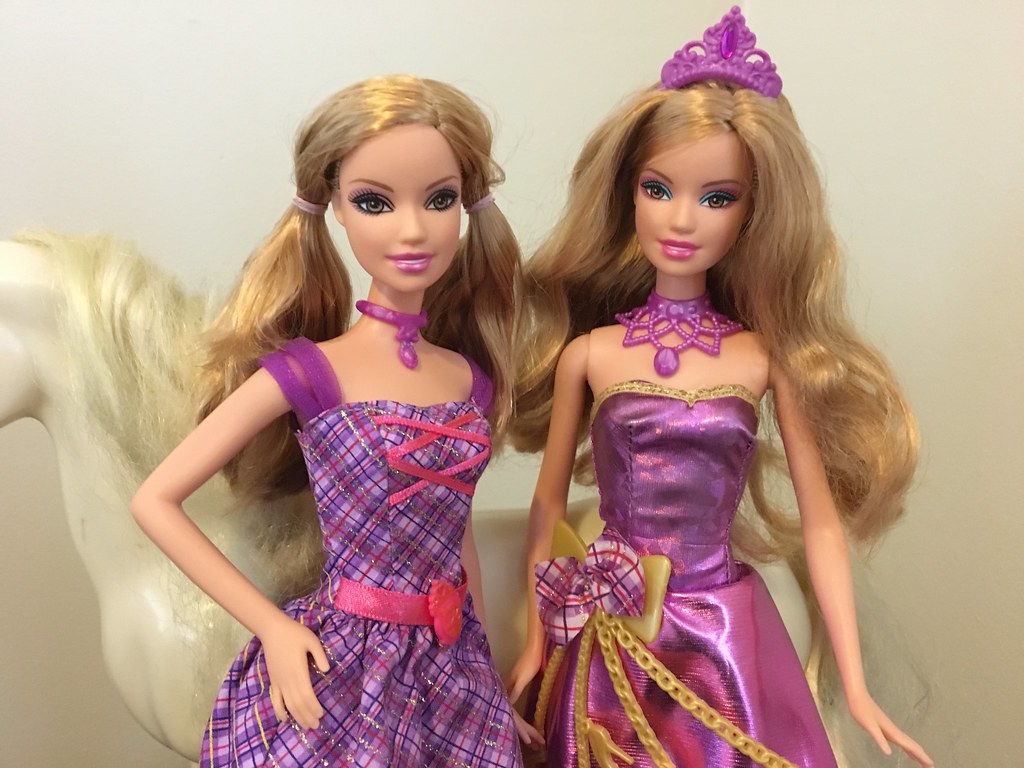 To summarise, I think these dolls are so beautiful and I’m so glad to own them. However, what would make them even better is:

And that’s all for today! If you’re wondering which horse it is in the background, it is from the 12 Dancing Princesses Carriage, which I also did a separate post on. I only stuck it there so the girls would have something to lean on. Sneaky, sneaky.

I went ice skating for real! It was my first time since I was very young, so I was terrible at the start, clinging onto the walls like mad, but I got quite good by the end. I didn’t need the walls at all! I’m still too afraid to lift my foot off the ice, so I can’t skate with the proper motions yet.

At $20 for a few hours, I don’t think I’ll be back anytime soon, though. It was a fun experience for sure, if you haven’t gone before then I totally recommend it. My favourite part was watching the proper figure skaters at practise, one of them lifted her leg right in the air and spun around so many times on one foot! (there was a rink for the figure skaters, and a smaller one for the public).

Oh, I did faceplant on the ice and busted up my leg, ouch. It still hurts to walk.