Hello! Back in 2013, when this video was first released, I built this ice rink:

It was quite similar to the one shown here, with the plastic cutouts, black foam, everything. It was quite nice! A few months later, I threw it away because it was taking up too much space. The cardboard was huuugge!

So, tonight, in 2017, I built one again. Why? Well, I’ve been on a bit of an ‘ice skating’ craze since I rewatched Barbie and the Magic of Pegasus (check out the review by going to ‘movies’ above). While it was inspired by Froggy, I made quite a few adjustments.

*sorry these first few photos are a bit rubbish, it was evening so there was no light* 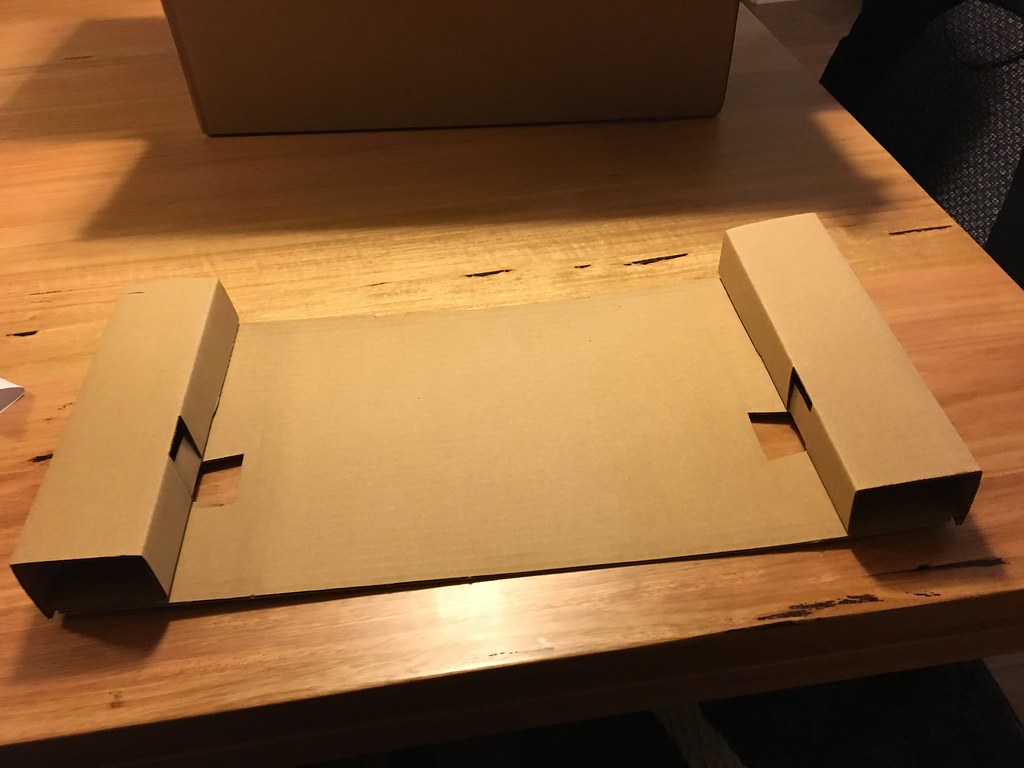 This is the cardboard piece I started with. It’s just a bit larger than an A4 sheet of paper, so perfect for easy storage. I was lucky because it already came with two ‘benches’ on the side. 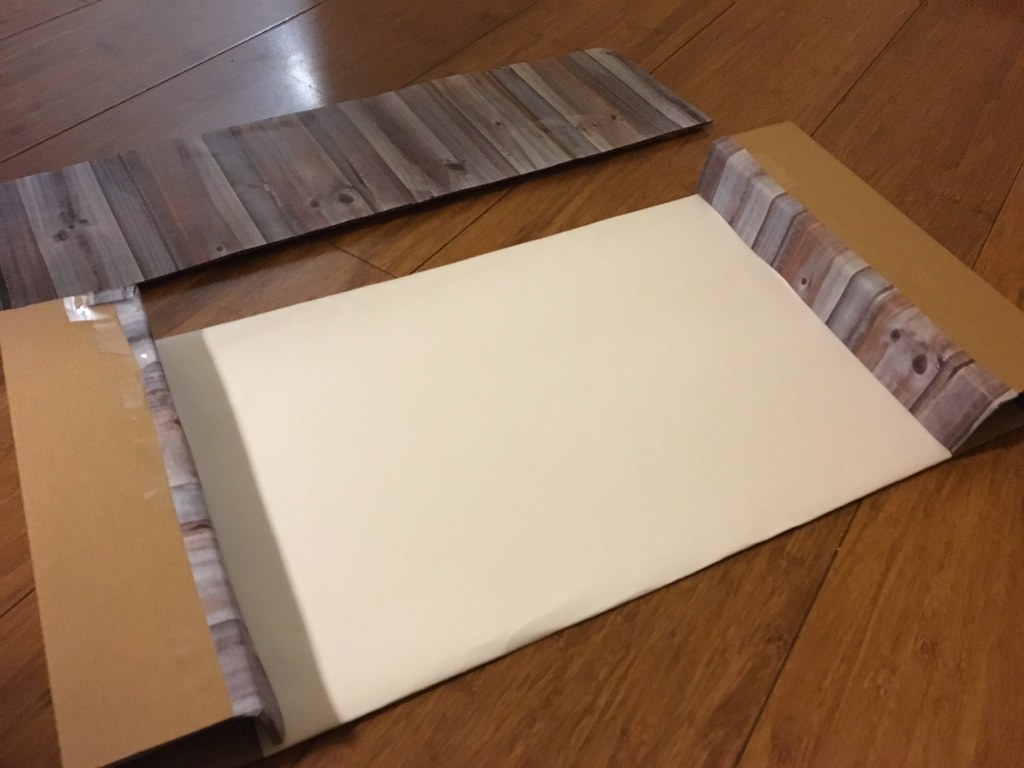 Firstly, I covered the rink in an A3 sheet of white paper, tucking the edges underneath.

The cardboard I used was quite thick -I got it in the mail after having something shipped from overseas. Not quite as thick as a moving box, but thicker than a cereal box. 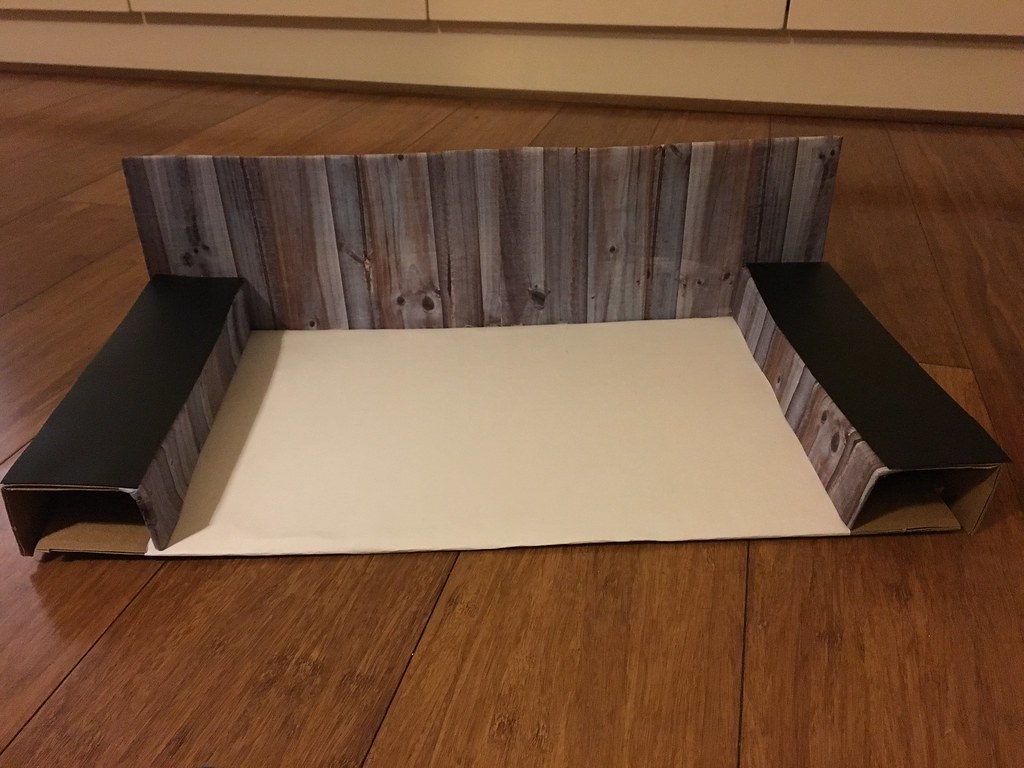 I then hot glue gunned the ‘wall’ to the back of the rink, and covered the top of the benches in cut-up plastic folder.

Hold up! Plastic folder? Yup, you read that correctly! I didn’t have any black paper, so I cut up a folder. As you do! It’s a bit shiny, but I didn’t want to go out and buy some paper just for this project. 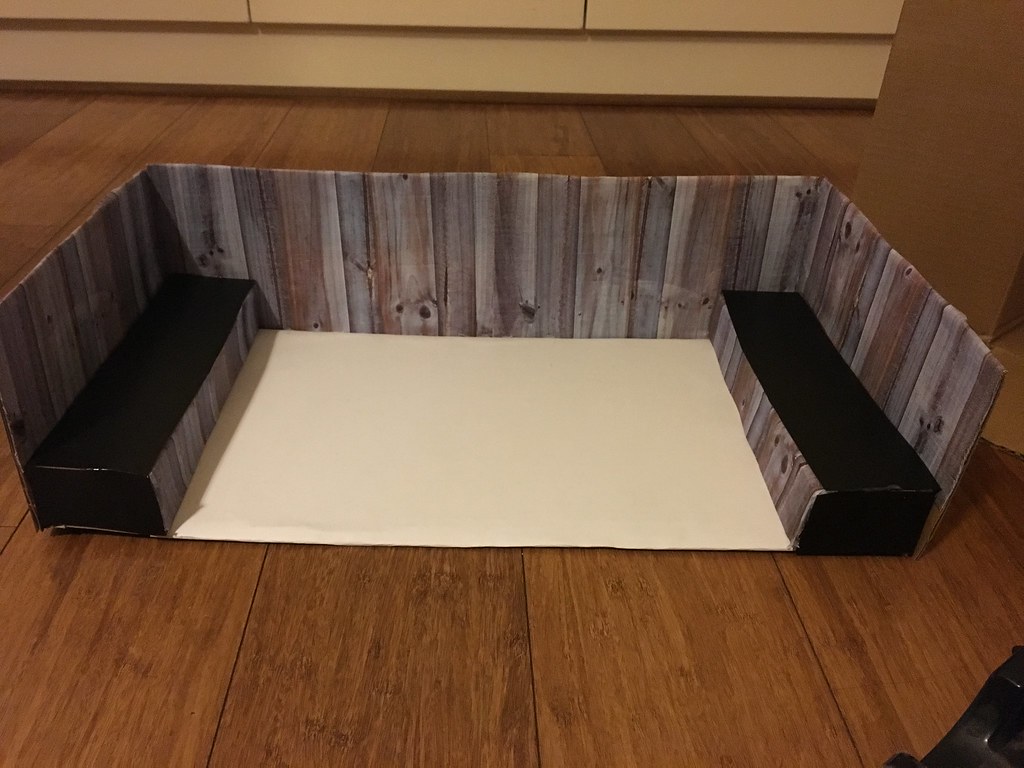 Next, I cut up smaller squares of folder to fill in the gaps underneath the benches.

To finish off, I added ‘walls’ to the other side. I haven’t covered the outside of the rink with paper, only because a.) I don’t have any printed paper left, and b.) I don’t think anybody will even look at the outside.

So, yes, this is definitely quite different from Froggy’s version! But that version simply does not work for me, since I don’t have any plastic or foam. I like how my walls are made with cardboard, as it allows dolls to hold onto them without me having a nervous breakdown everytime I need to glue the walls back together!

The biggest disadvantage is how dark it is, but I hope, once I bring it outside with some dolls it’ll be okay!

Oh -I also made some ‘ice skates’ by layering cardboard together and then hot glue gunning a paperclip on the bottom, with a rubber band to attach to a doll’s shoe. I thought it would end up really cool, but turns out that a doll can’t balance on two paperclips (why didn’t I realise that before??)

Yay! All finished! Well, not quite. I wanted to add some glitter to the rink but I was concerned it would get all over the floor when I put it away.

I also made some paper snow on the fence, which doesn’t really make sense to me but Froggy did it, and it looks cute, so… 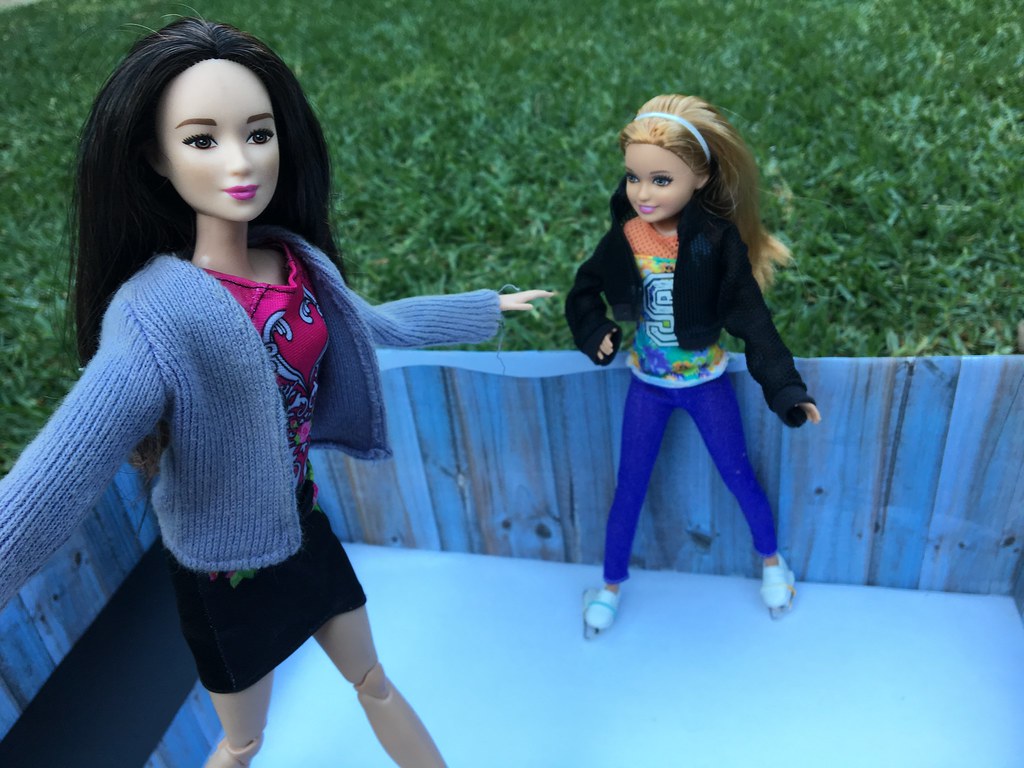 Here is Stacie wearing the ‘skates.’ It’s a good thing I built the fence so steadily, now dolls can have something to hold onto! 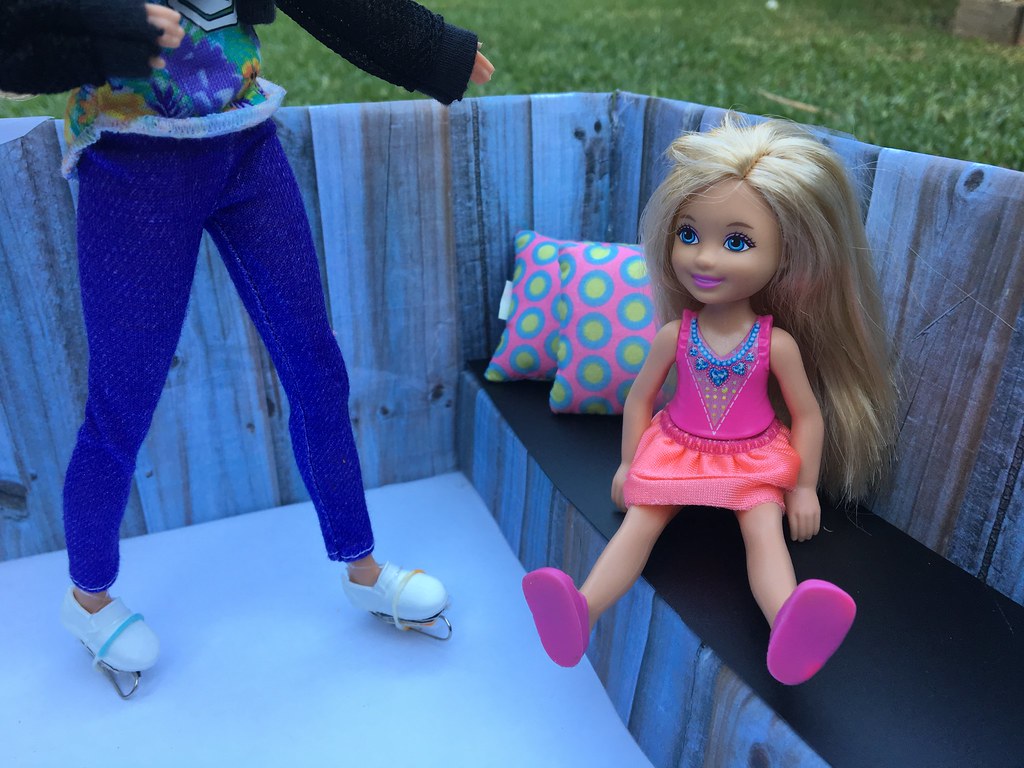 I think the benches were a good addition. Who cares if it’s not realistic?? 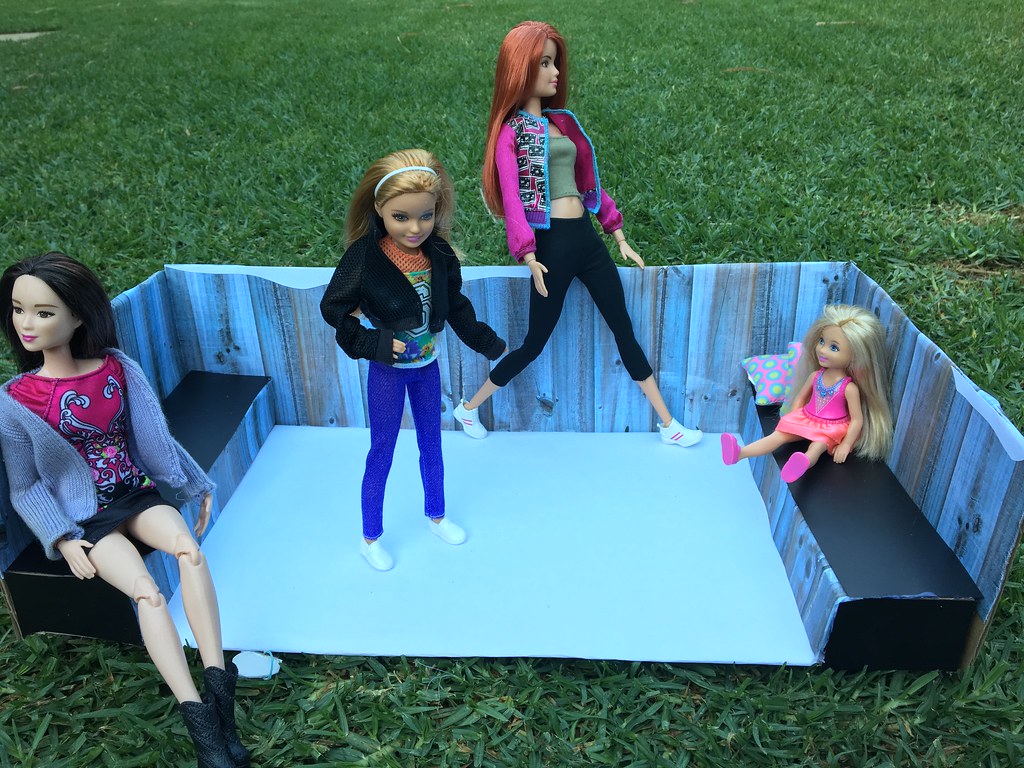 Overall, I think it is cute and easy to make. I liked how it came together so quickly -the whole project took me less than an hour. However, I don’t think I’ll be using this too much as the dolls can’t stand up by themselves and just spinning a doll around the rink tends to get a bit boring.

2 thoughts on “Building an Ice Rink for Barbie & Friends”