There was a stage of my life where I was wildly obsessed with Barbie, but was ‘too old’ to be allowed to buy Barbie whenever I went shopping with my parents, but ‘too young’ to go to the shops by myself to buy it secretly. So I went quite a while without getting any new Barbie stuff! It was very painful, and I’m sure it didn’t help that I constantly stalked The Barbie Boutique on Mattel Shop.

One thing I really, really wanted was Barbie decor. A notebook. A shirt. A bag. Nail polish. Anything. If it was a human-sized accessory with Barbie’s face on it, I wanted it.

Nowadays, I don’t really ‘crave’ this kind of stuff anymore, but I do have a bit. 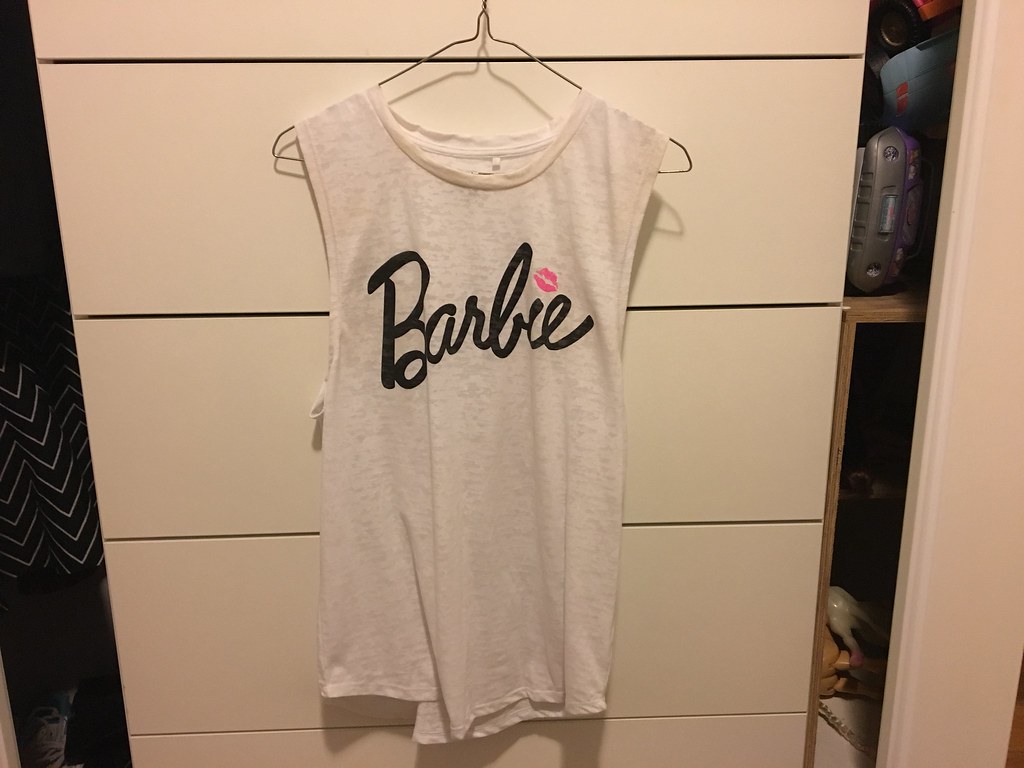 This is a tank top I got from Big W in 2016. I think it was $20, which I consider rather expensive -considering it’s so thin that you can’t wear it without wearing something underneath! Like, your skin literally shows through the fabric. It’s also sleeveless, which is a bother.

I think I’ve worn this once? Maybe twice?

Anyway, this came from a line called “Big W Loves Barbie,” but this was the only item to arrive to my local store. After a week or so, the rack had disappeared and I never saw this line again. There was a competition going on, where you could purchase a shirt from the range and take a photo of yourself wearing it. It was judged by creativity (aka: not a random draw), and I was one of the winners! 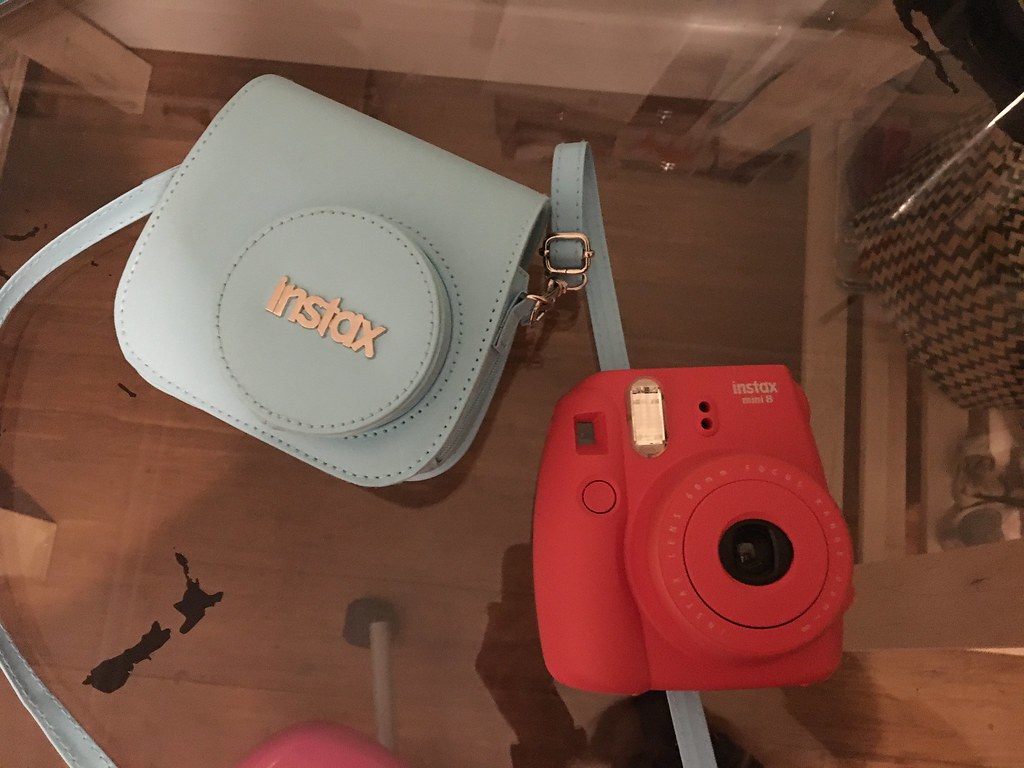 This was the prize! I was actually contacted by Barbie. (Not, like, Barbie the character, but representatives from the company. It was a dream come true.) It’s a Polaroid camera, case, and some film, worth over $100! We didn’t get to pick the colour -if we did, I would have picked either white or pale blue, not raspberry. My mother says it looks like a children’s “safety” camera, and warned me not to take it out in public. I ignored her advice, haha.

I was so shocked to discover I had won. It’s just whack that somebody who works for Barbie saw my picture and looked at my Barbie-filled Instagram. I wonder what they thought of my doll pictures. 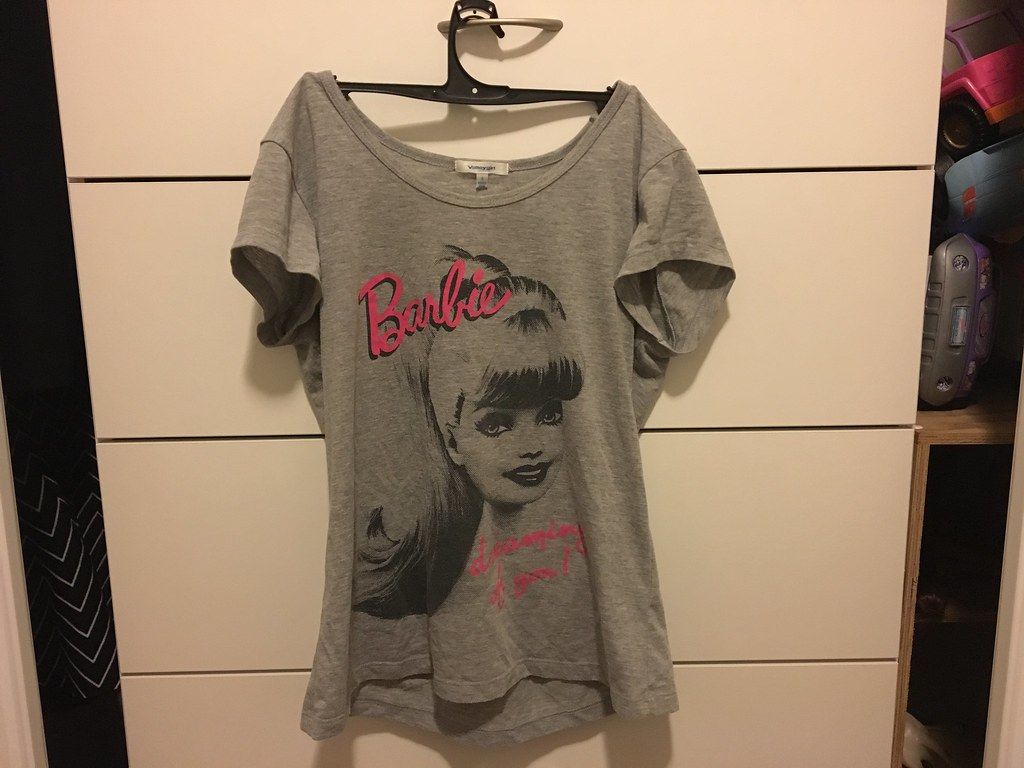 This next shirt comes from Valleygirl, which is a teenage / young adult store that plays songs exclusively from Top 40 and all the girls that work there look like models. Needless to say, I was surprised to find this shirt there.

It’s comfortable, but a bit daggy, so I wear it to bed. It says “dreaming of you.” 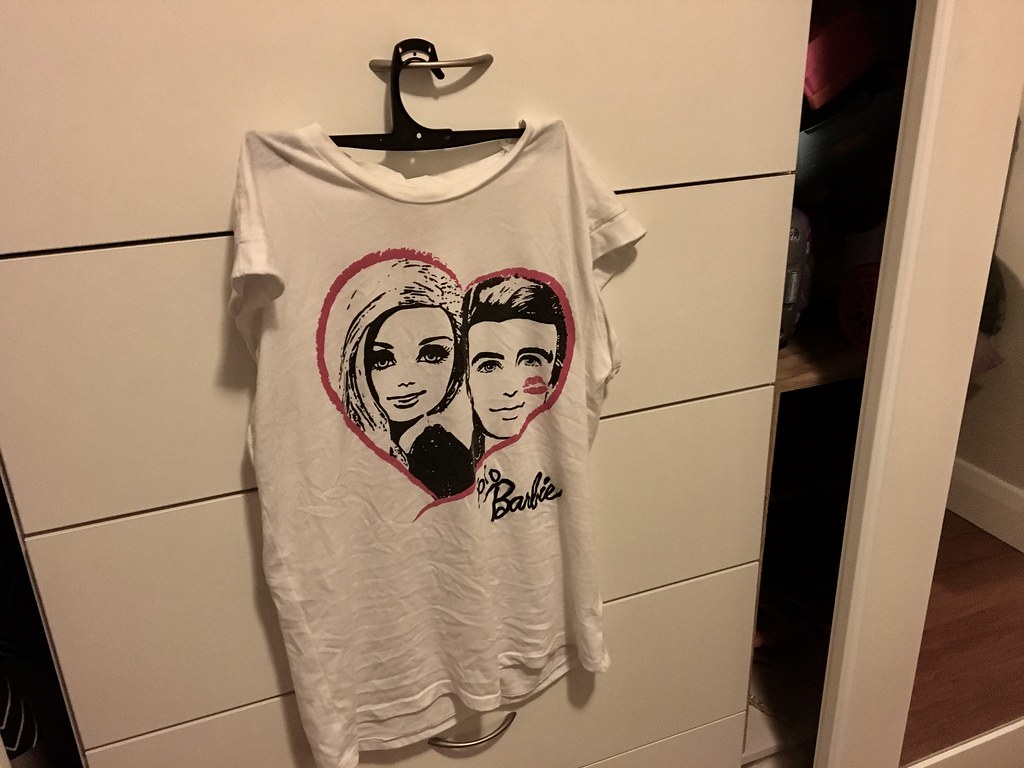 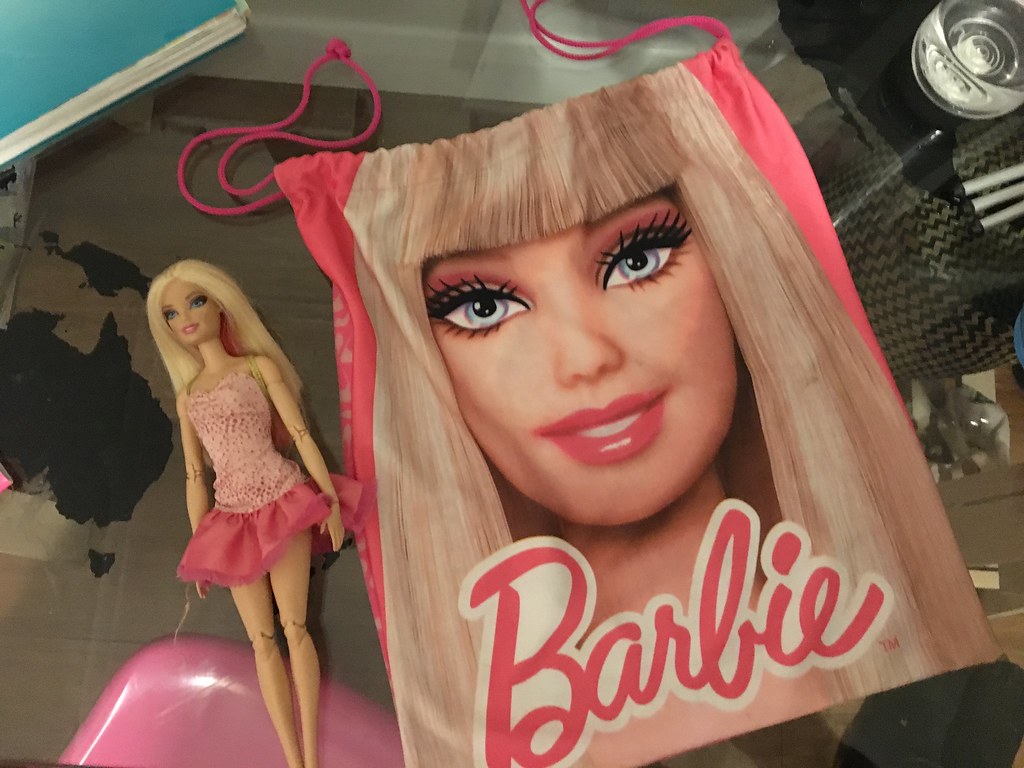 This bag comes from “Barbie Week” 2009 at Target. It’s the week of Barbie’s birthday, in March. Sometimes there are sales, sometimes there’s a free gift, sometimes they forget and you get nothing. It’s quite small; I included a Barbie doll for scale. I’ve never taken this anywhere with me -but I am thinking about using it to store my pyjamas when I next go travelling. 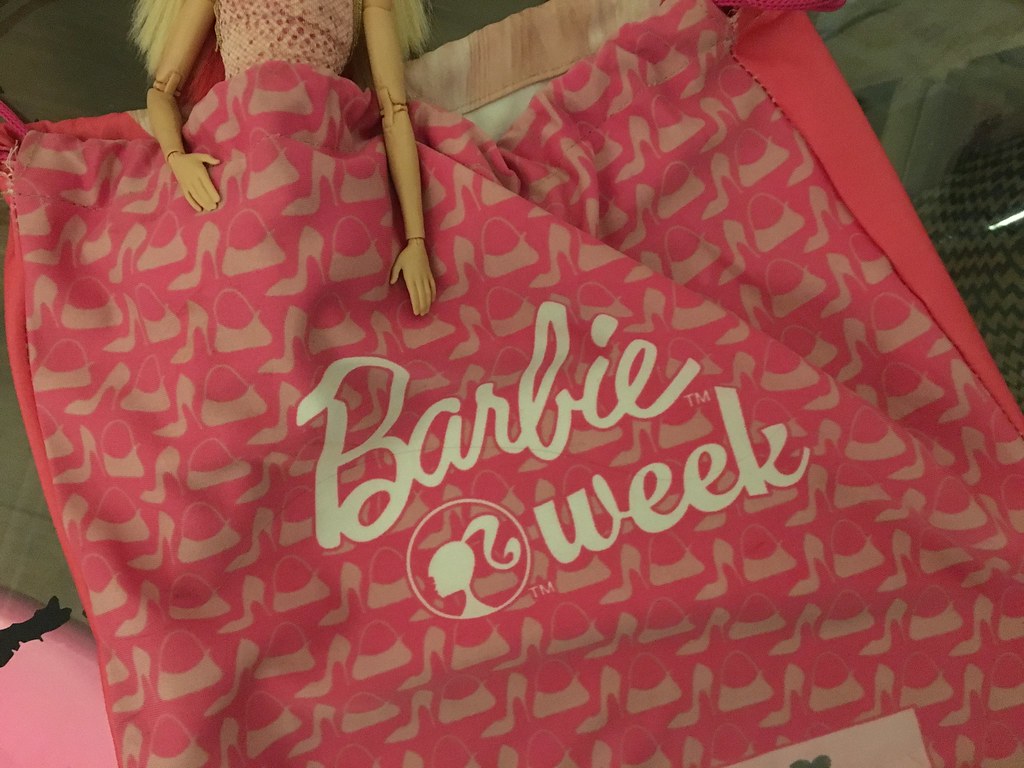 I like the design on the back. It’s interesting how this was made almost 10 years ago, but the design is so timeless it could have been made recently. 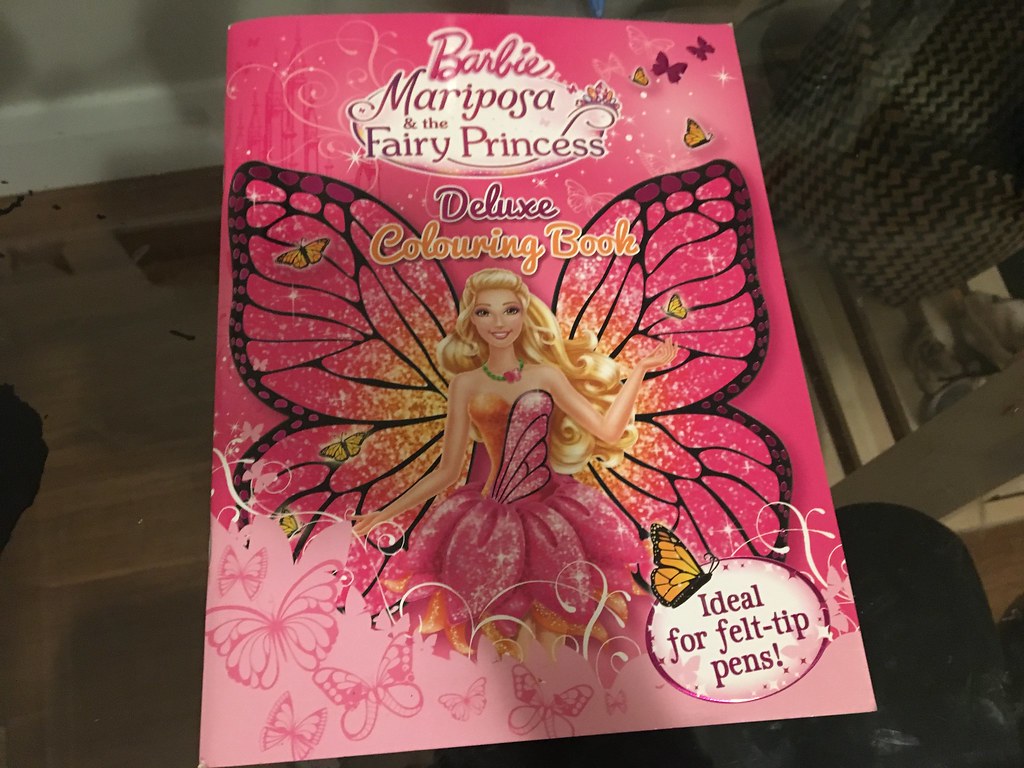 Story Time: I bought this in 2013, after my friend invited me to the shops. I was ecstatic, because this was the first time I had gone shopping without an adult. I could finally buy something Barbie! “Oh, this is for my sister.” I explained to the friend, as I picked up a Ryan Fashionista and this colouring book. “It’s her birthday soon.” The friend was terribly embarrassed about standing in the Barbie isle.

I don’t know why I felt the need to buy a colouring book. Heck, I hate colouring! Even as a five year old, I always thought it was a huge waste of time, and never understood why teachers made us do it for hours upon end. 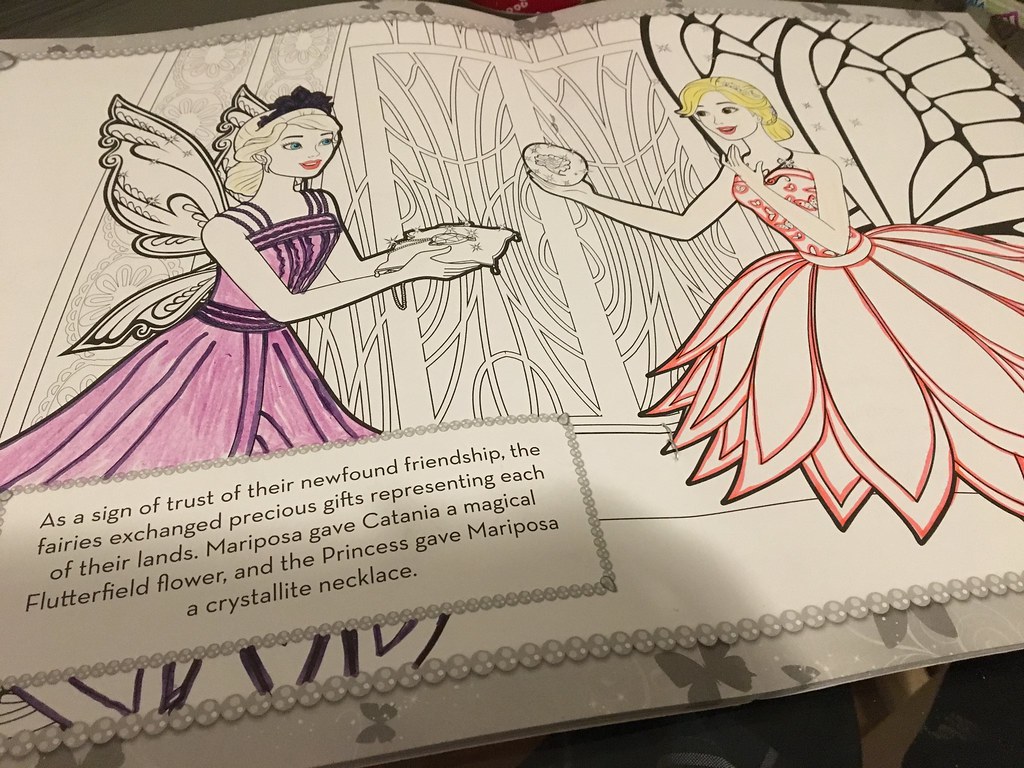 I haven’t done much colouring in it. I remember the book was $4, and the Fashionista was $16. This was back when they were articulated, so they were up to $20 each sometimes. Not like nowadays, where you can get one for $12! 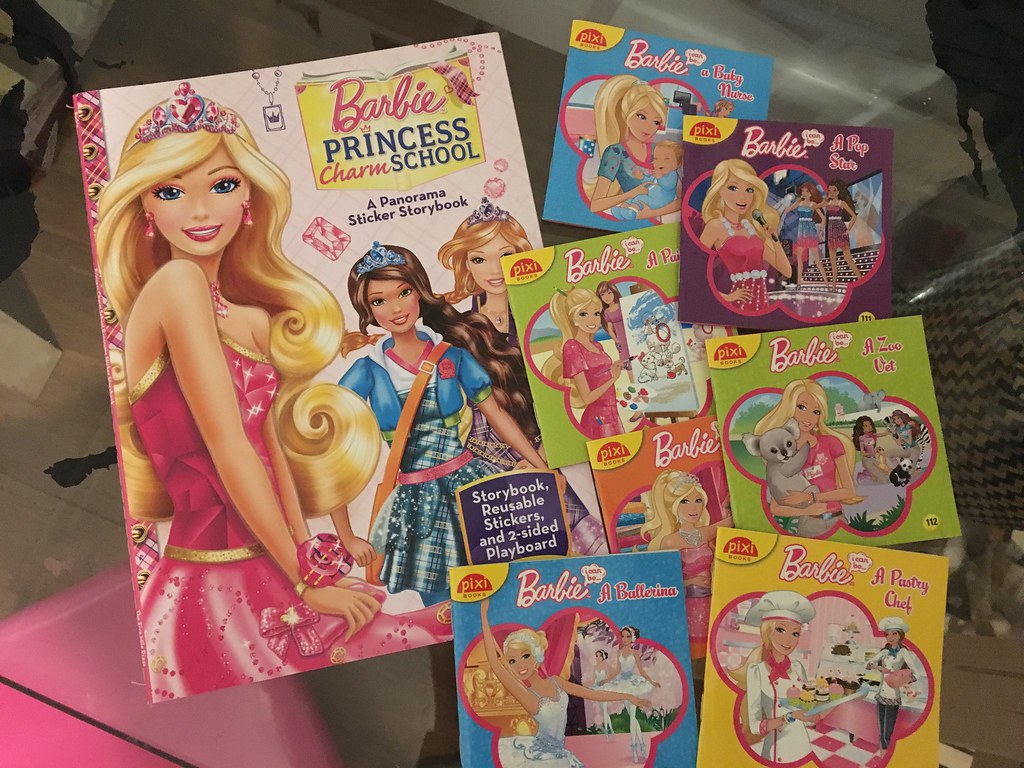 And here’s some extra stuff -you can read about the Princess Charm School storybook in a separate post here . 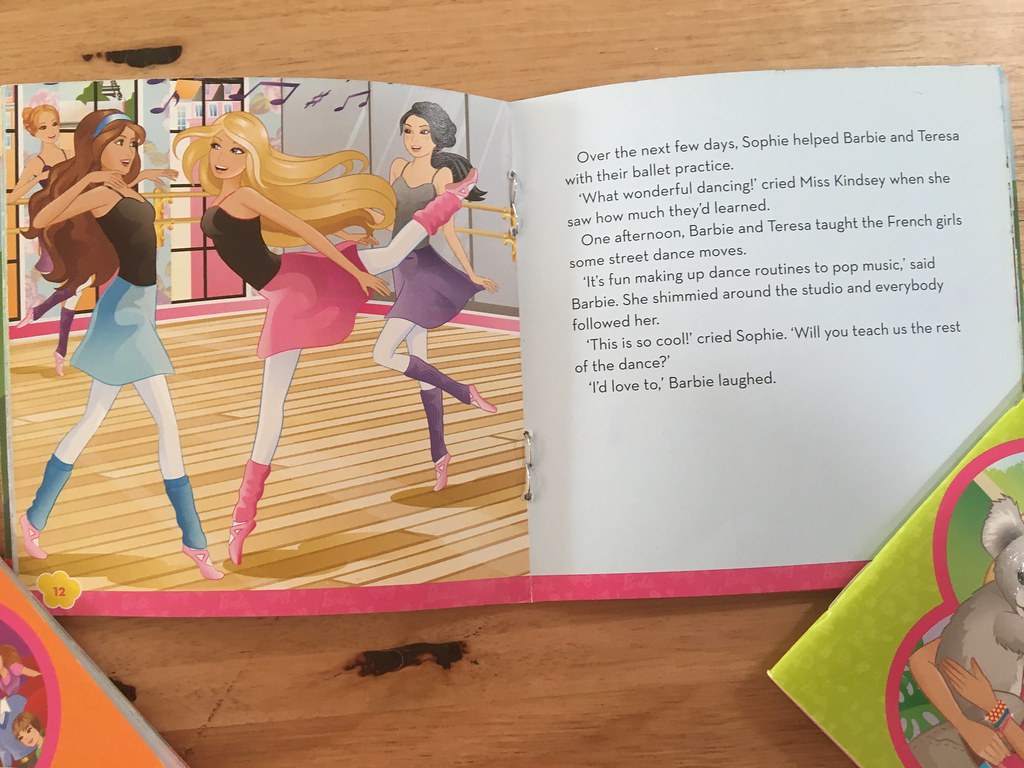 This scene is from the I Can Be: A Ballerina book. The books are very similar to the ones you read when you first start school, so I’d say they are appropriate for someone 5-7 years old, depending on their reading level. 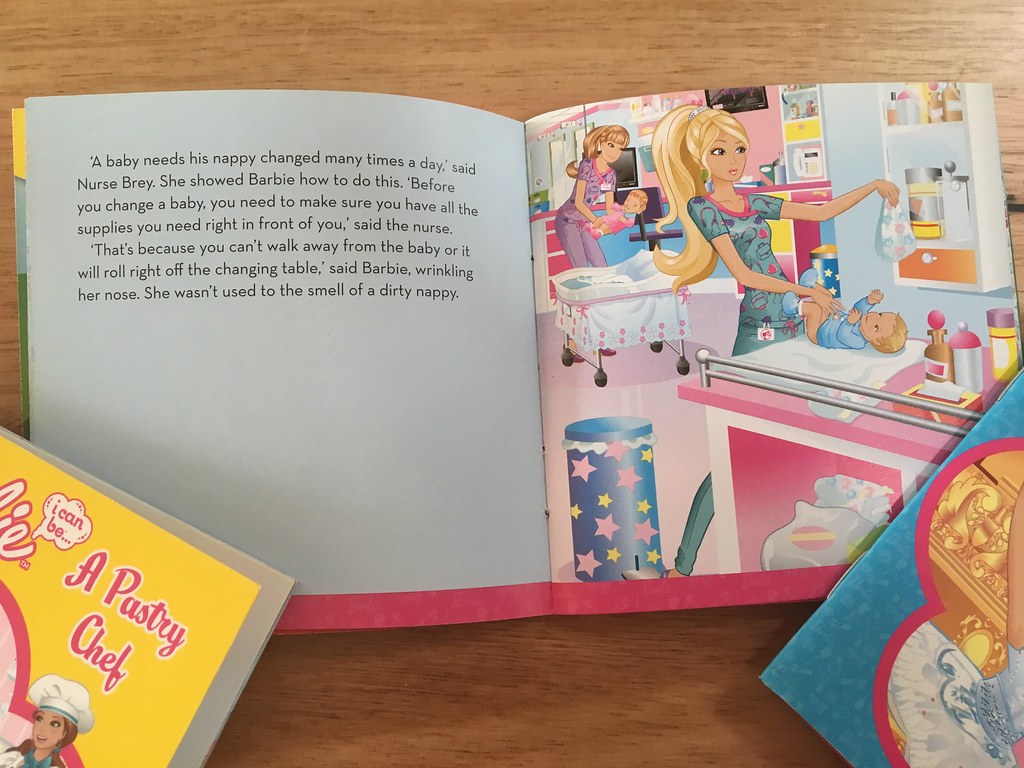 Others (such as I Can Be: A Ballerina and I Can Be: An Artist) do have plots, but they’re very simple, and usually revolve around pets destroying things. 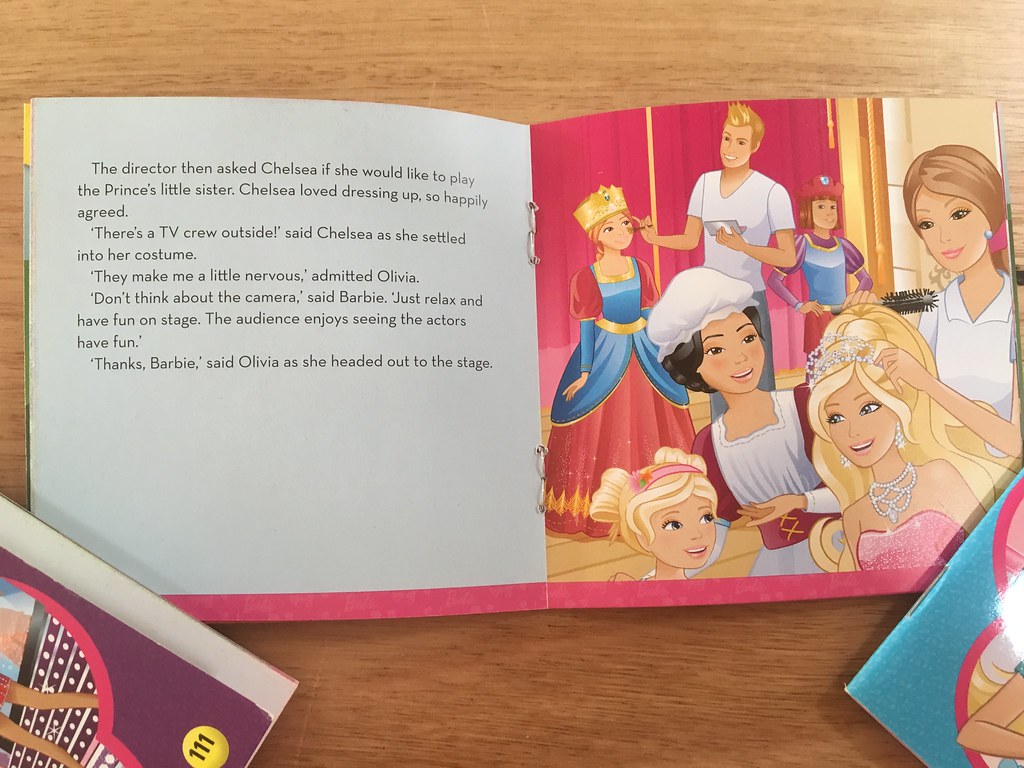 This one is from I Can Be: An Actress. All of these books were produced in 2012, by a company called ‘Pixi Books.’ There’s no author. 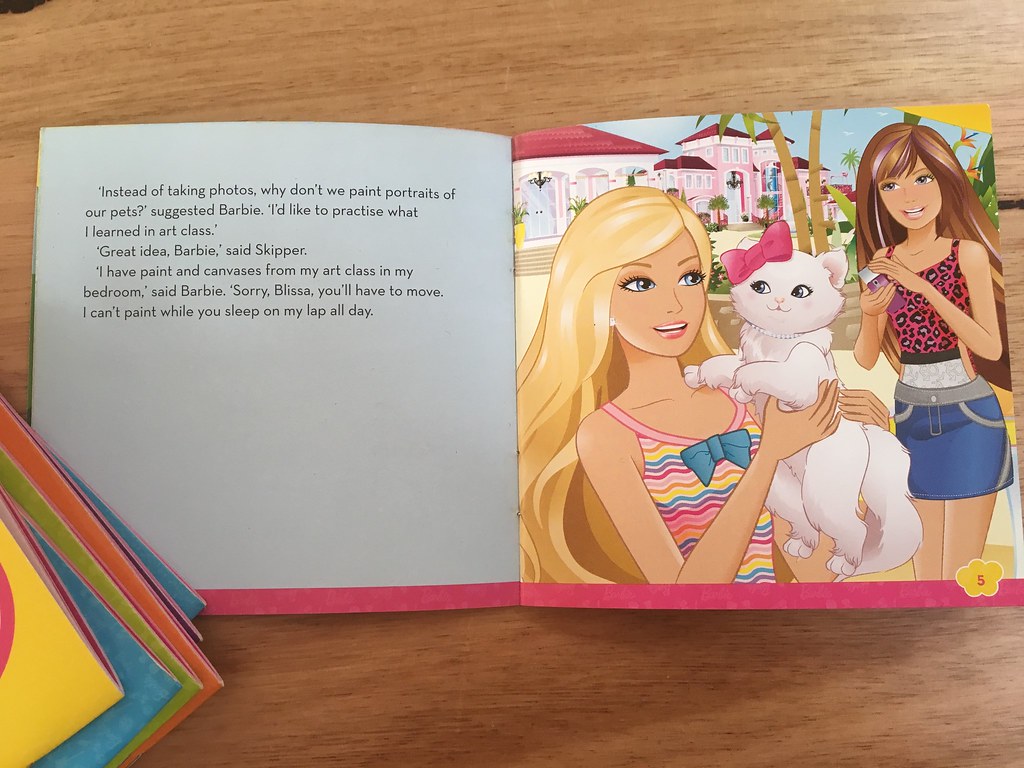 This one is from I Can Be: An Artist. I wish there were books produced for an older audience, like 8-10 years old. They wouldn’t have to be complicated, perhaps like the Bindi Irwin series, or the Ever After High novels. But I suppose that’s not really the target age group for Barbie, is it? 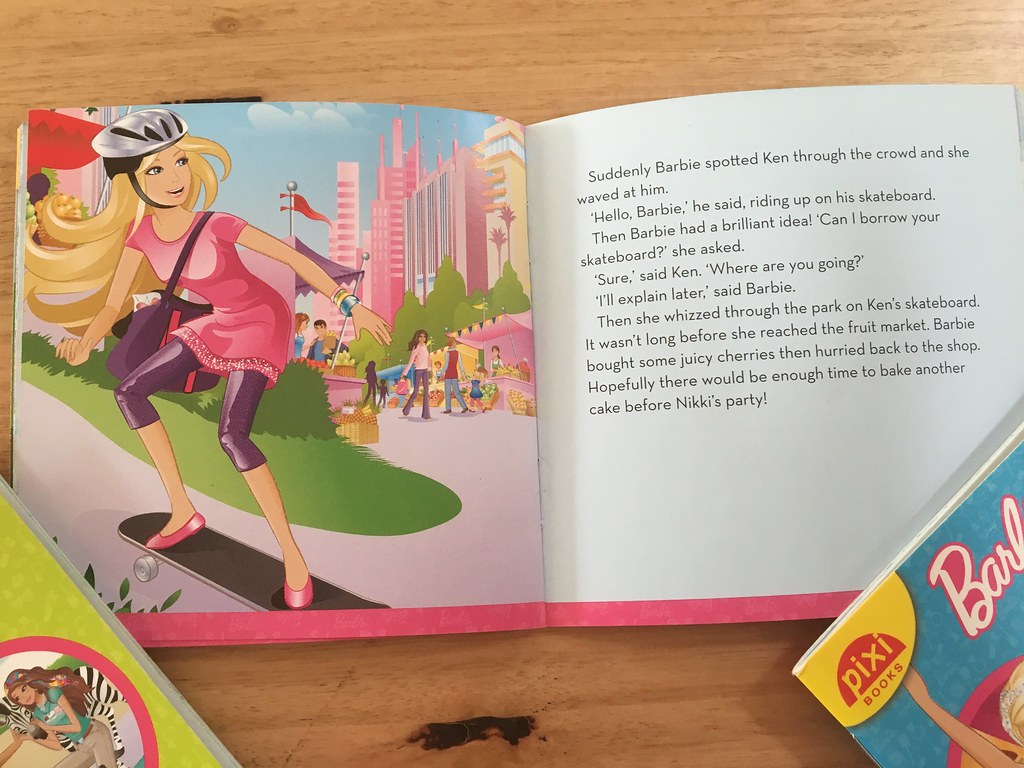 This one is from I Can Be: A Pastry Chef. Many years ago, I purchased an few older Barbie books -I think they were from the 90s- and they featured real Barbie dolls! I thought that was really awesome; I wish they still did that nowadays. 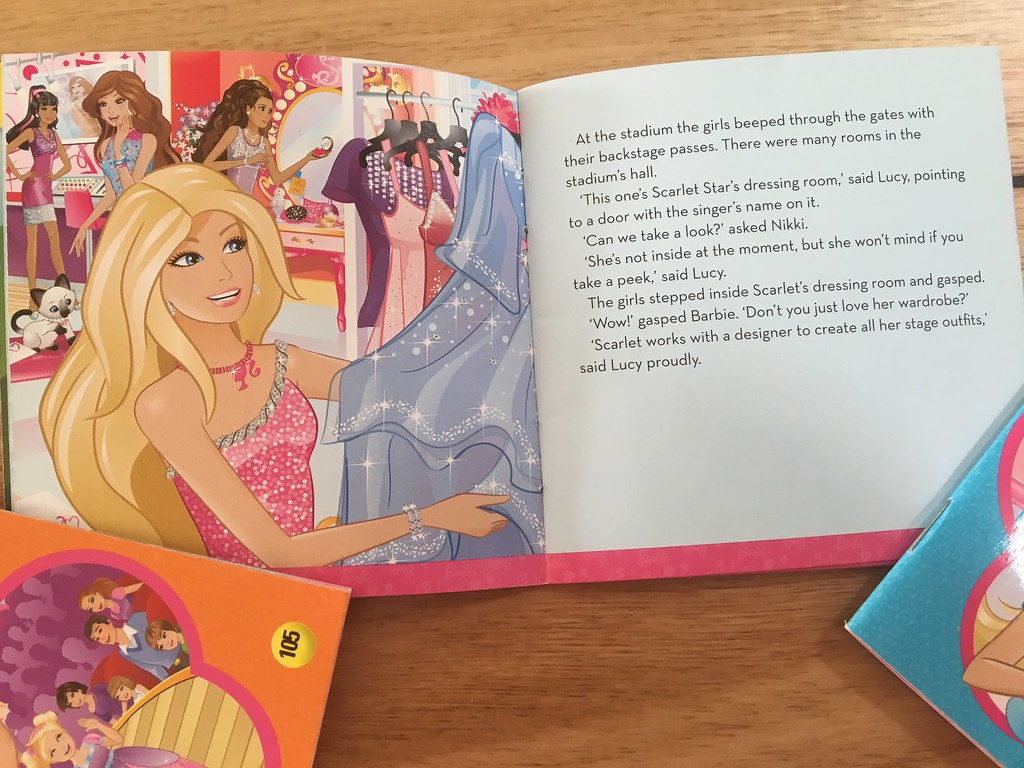 This one is from I Can Be: A Popstar.