This is a promo image for the Barbie Rio De Jenerio dolls, produced in 2002 and discontinued in 2004. This image is not mine, credits to Lina Costa from Flickr. Original image available at https://www.flickr.com/photos/linadolls/9771319935/sizes/l as of 25 March 2017.

“Barbie doll and her friends are ready for the beach or pool in the trendiest swimwear under the sun. Barbie, Christie, Skipper, Teresa, and Lea dolls look cool in wave-patterned swimsuits with belted accents. Ken and Steven dolls wear coordinating shorts. Each doll comes with a cardboard kick board.”

I also used to own Ken, but his head fell off, so that was the end of him! See how lovely Teresa looks in this image? Yeah, that’s not what mine looks like! (On another note, don’t they all look awesome put together like that? Christie, Lea and Skipper are my favourites, but especially Skipper)

See this teeny-tiny photo here? See that car? I OWN THAT CAR. I’m not sure when it was produced (I’m assuming 2002 as well), and I can’t find the name. I don’t think it was part of the Rio line, because it didn’t come up in my search results. 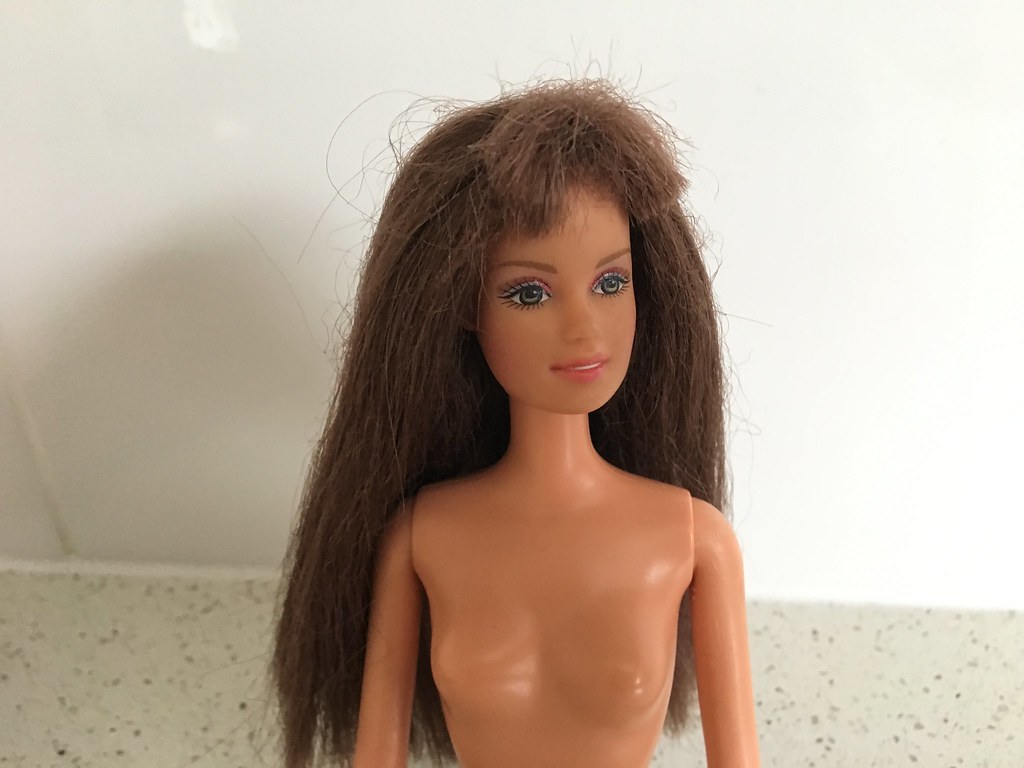 This is what my Teresa looks like! Her fringe is all messed up, and that hair is really frizzy. 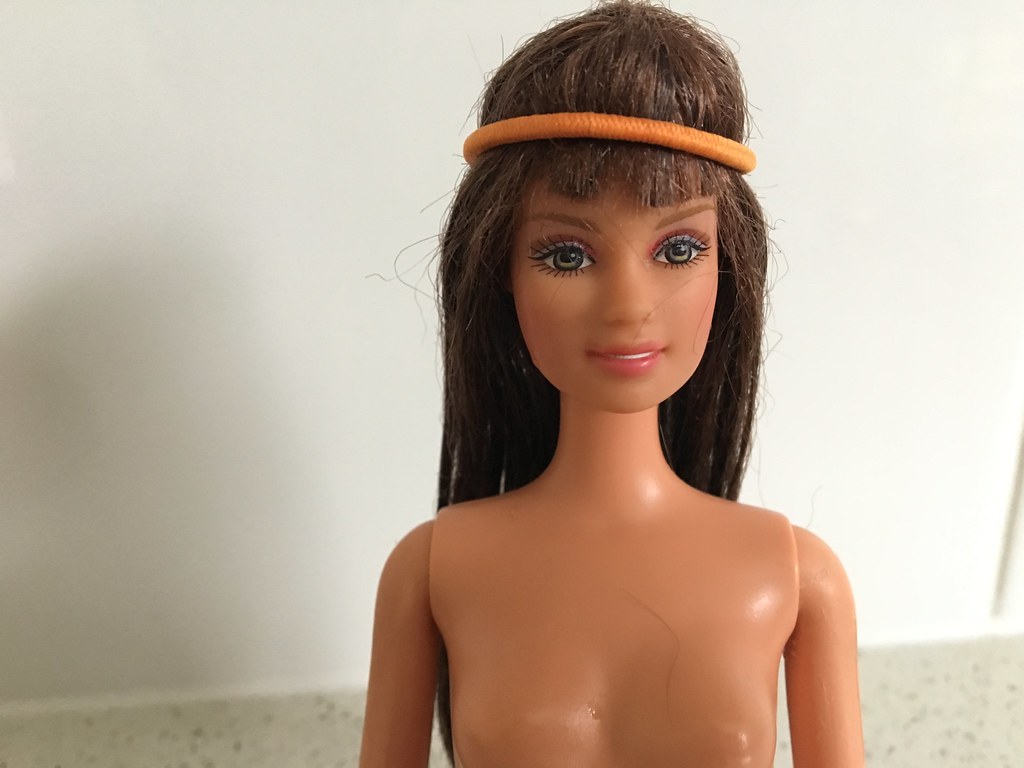 This is what she looked like after a boil wash and applying some really nice hair oil. I left the hair-tie on for 2 days, in the hopes her fringe would go back into place. 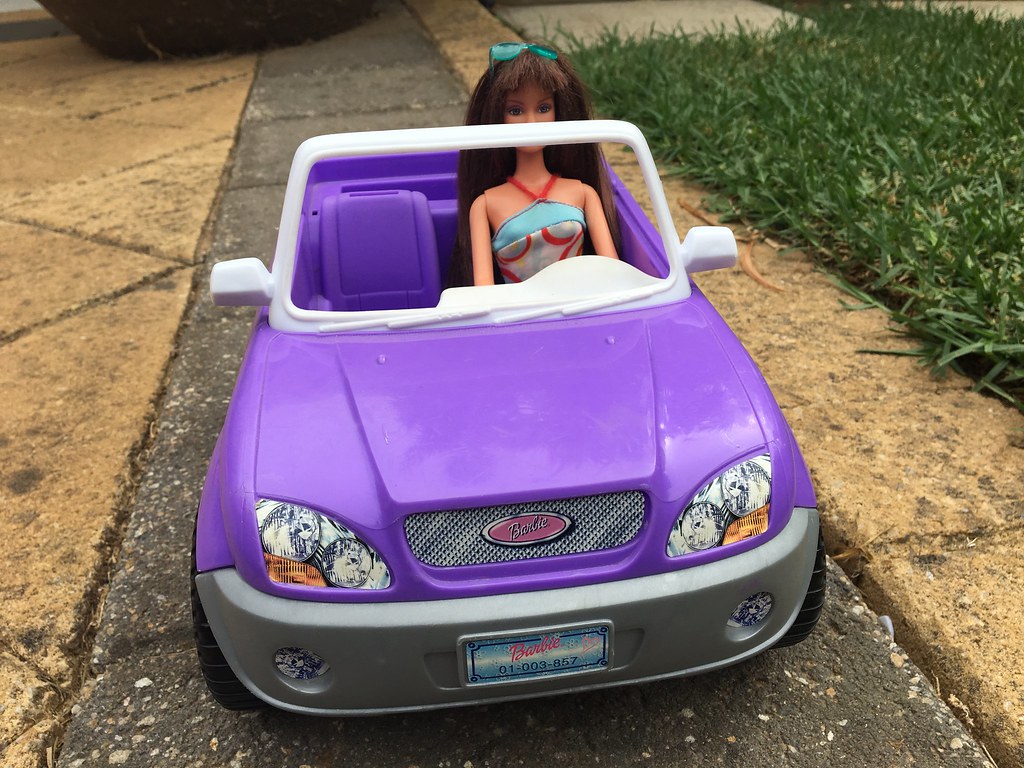 This is the car. It’s quite nice, very 2000s, but what else can you expect? I quite like Barbie things from the 2000s, they’re kind of …Charming? It makes me wish I had gotten to experience that era a bit more -I wasn’t allowed a cool flip-phone and I didn’t even own blue eyeshadow. I did have a big collection of ugly bootleg jeans though! 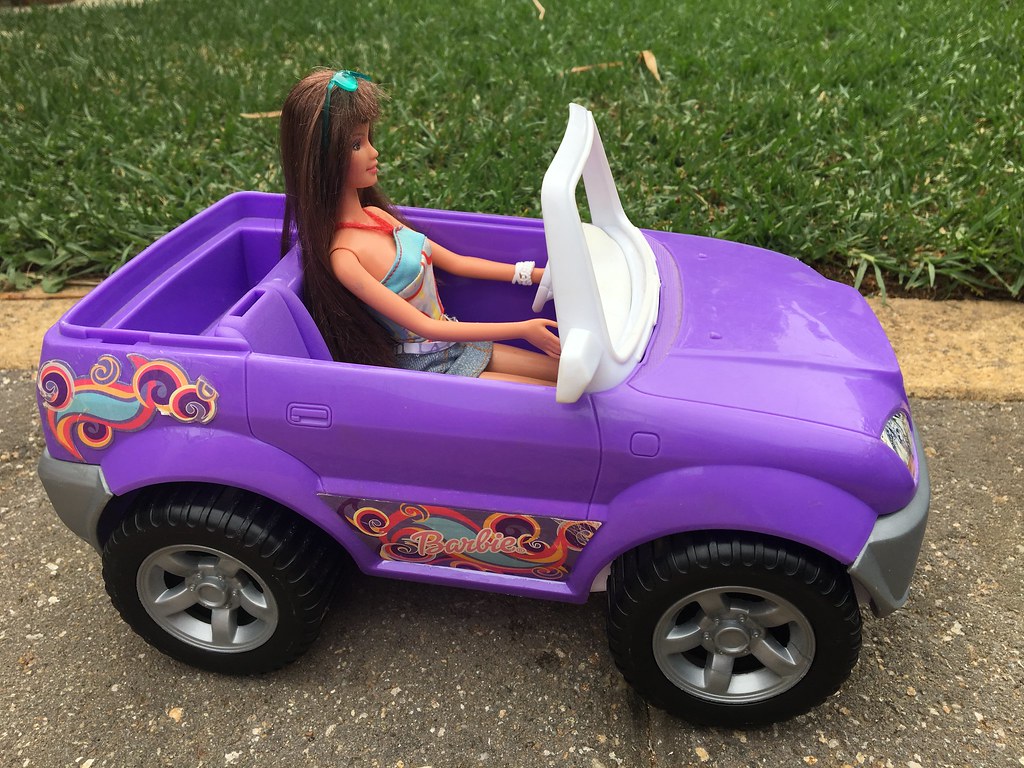 The side of the car has a similar swirly pattern on it, which makes me wonder if perhaps it is part of the Rio series after all? I love the look of the old Barbie logo, and I really like how the wheels are silver and black. 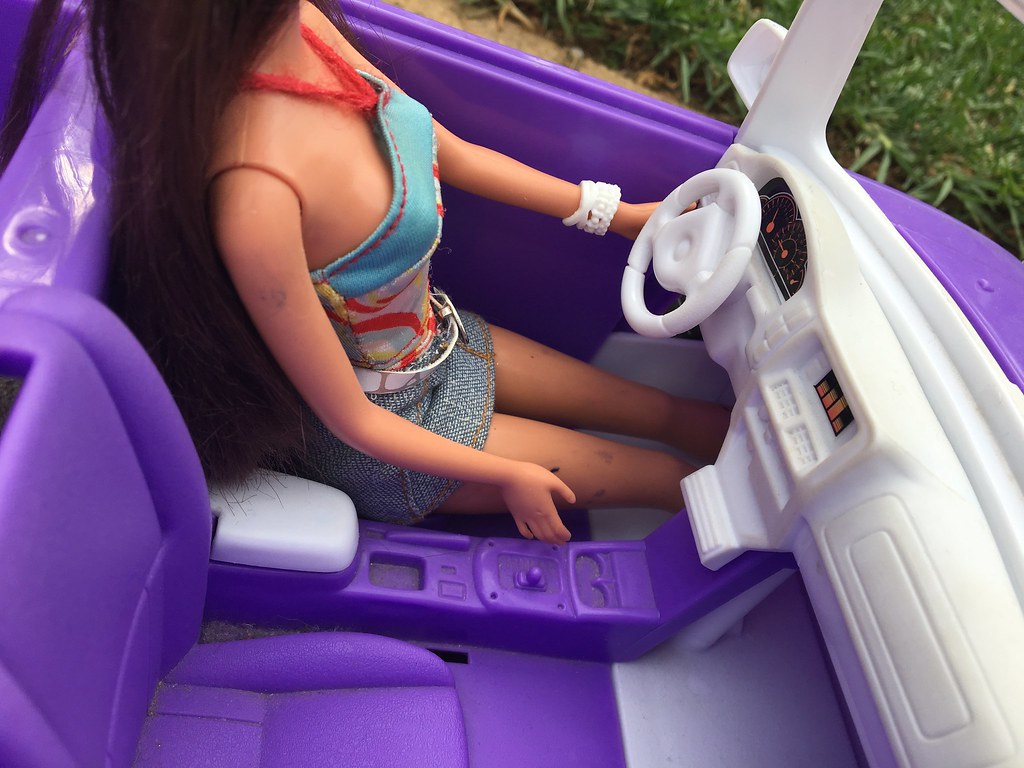 The dials are nothing to get carried away about -plain black with some orange. Underneath the white lid is a drink holder, but my sister got a bead stuck in there, so it doesn’t actually hold anything. 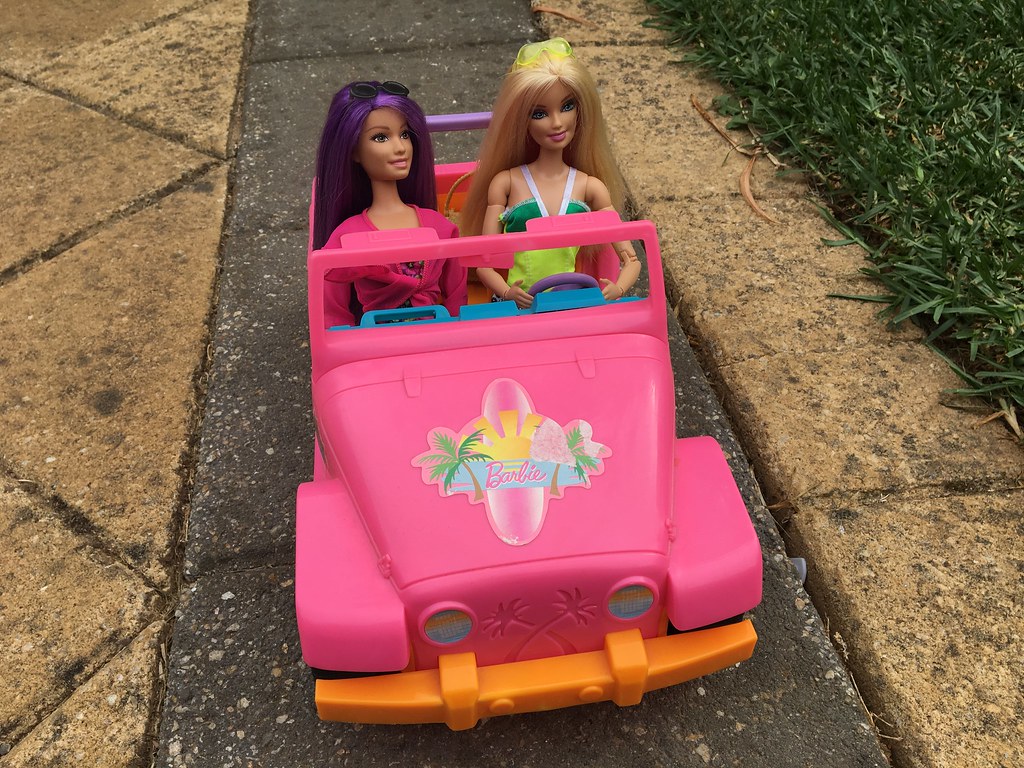 I received this car in 2009, but the back of the packaging said 2008. It was really nice packaging, too, lots of images of Barbie and her friends doing ‘beachy’ things, like going for a walk, bike riding, surfing, etc. The front sticker has warn off in a few places. 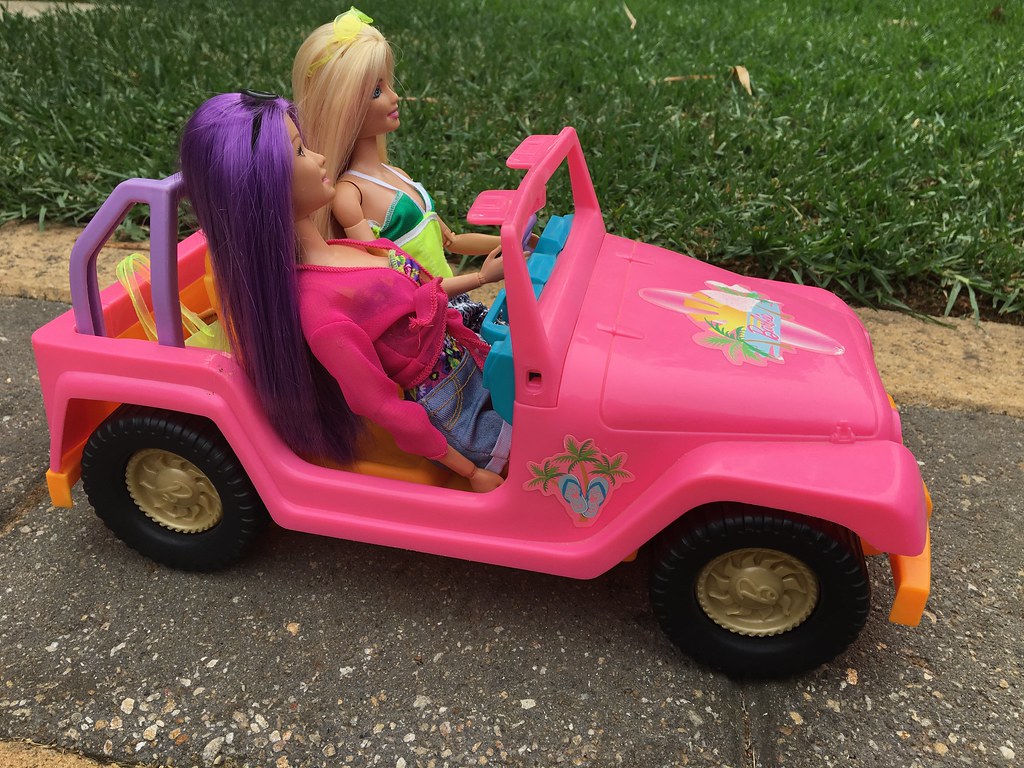 I really like the design of this car, it’s pretty unusual. Very beachy. 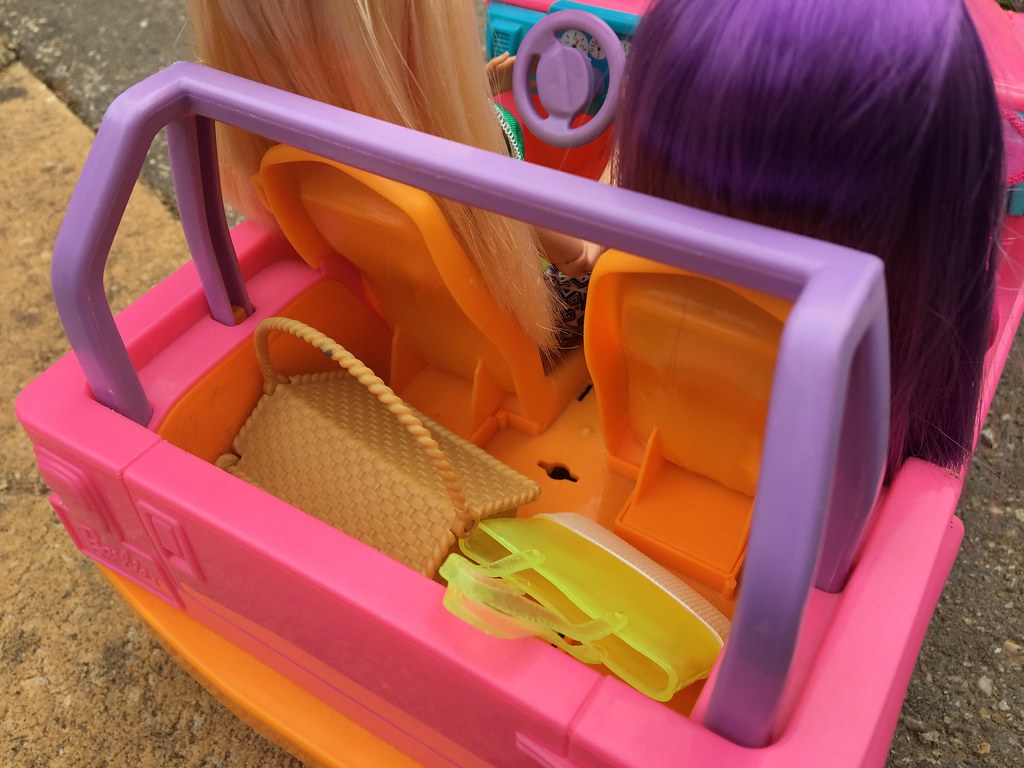 The trunk is so big, another doll can sit in the back! Awkwardly, but still. Two seats really isn’t enough. 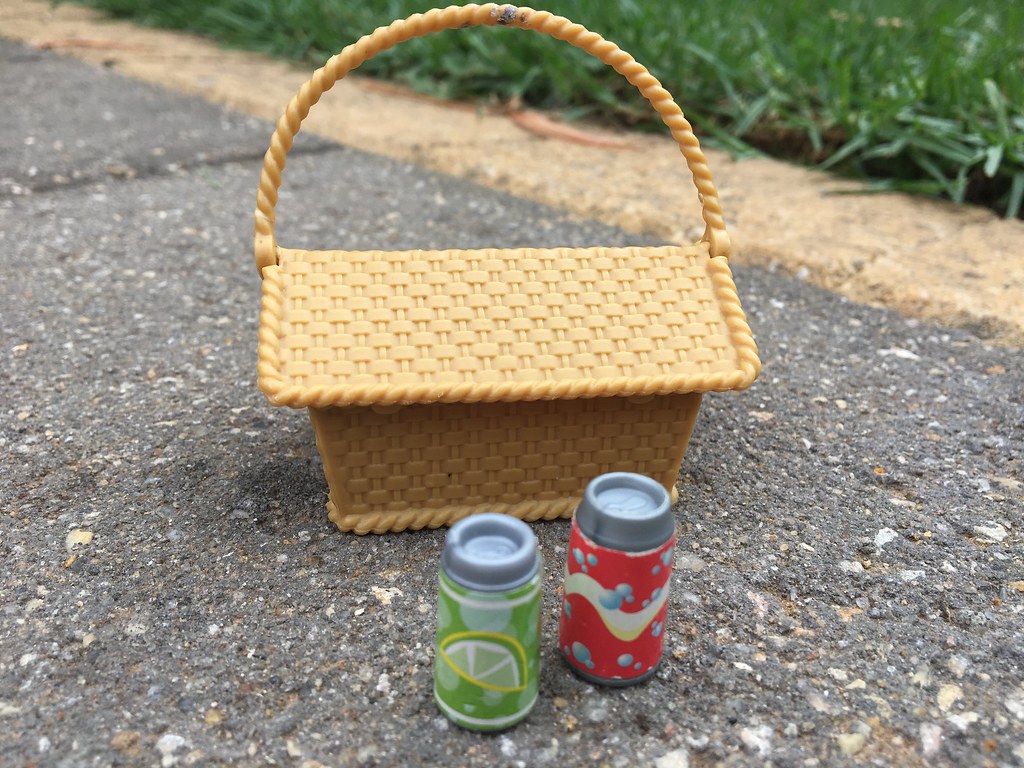 The pink car came with this picnic basket (it opens) and two bottles of soda, which makes sense because there is two holders. I really like the design. The purple car came with three bottles of the cola. Why three? That’s a bit strange, considering there was only space for one drink in the holder!

It’s interesting to see the evolution of the drinks -you can easily tell the soda was produced after the cola. 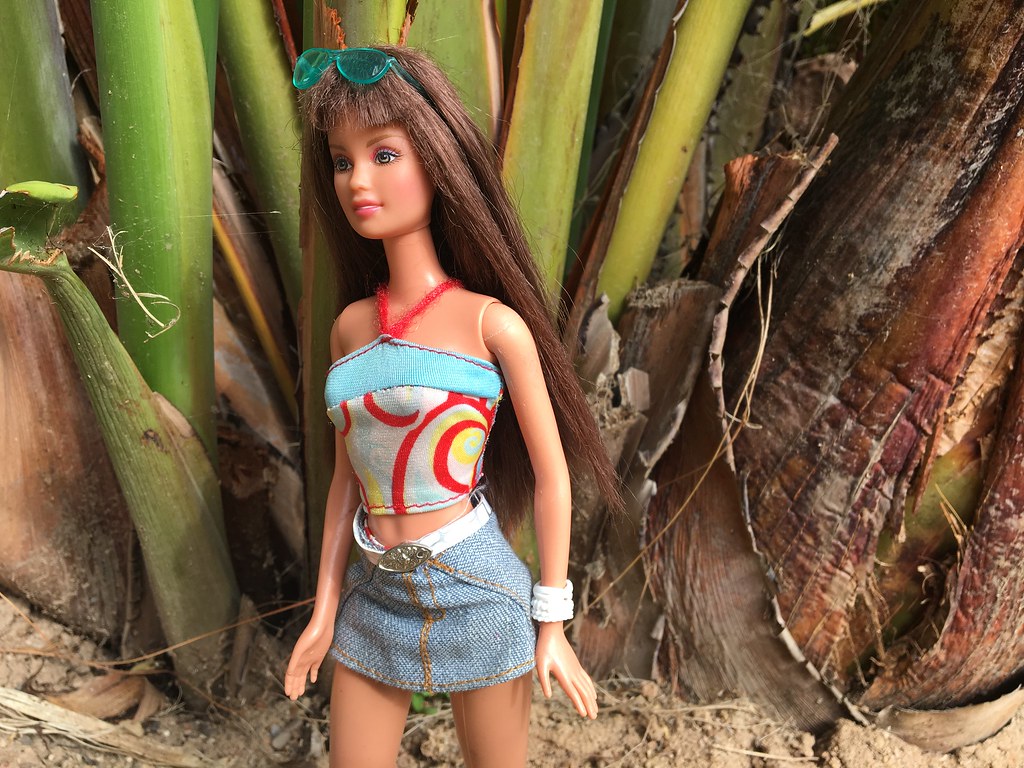 Here’s Rio Teresa after her makeover. She didn’t come with the skirt, sunglasses or bracelet, I just added those on to show how the top part of the bathers can also double as an everyday shirt. 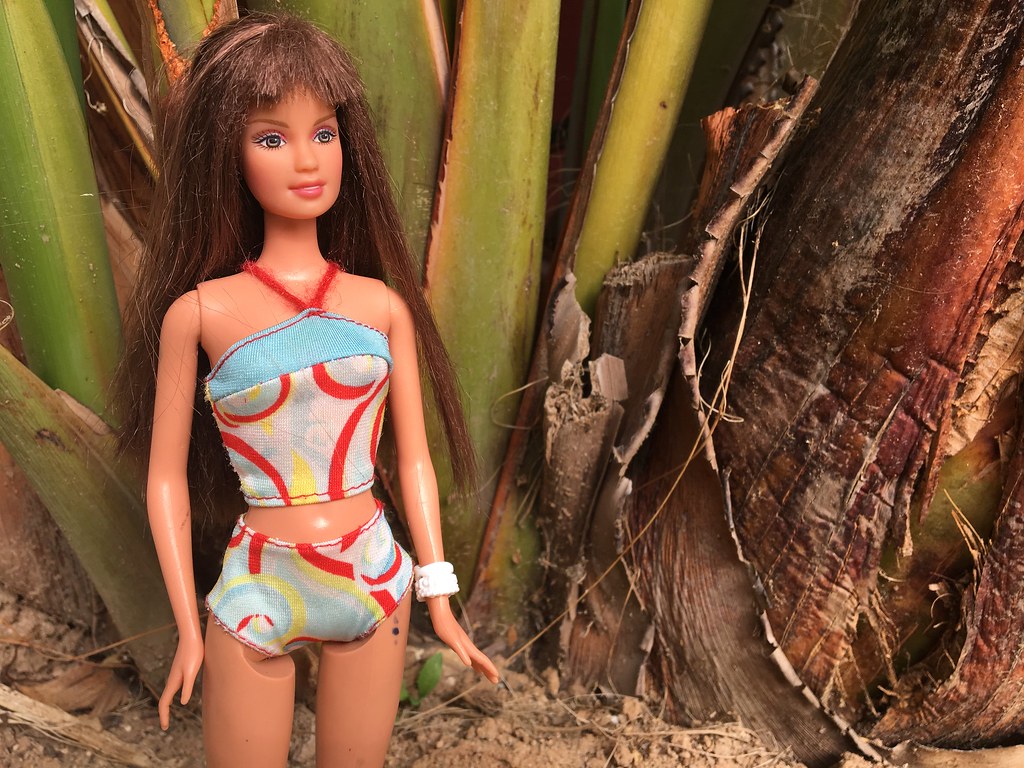 Her hair and fringe are definitely better, but they’ll never get back to their state of just-deboxed-freshness. Although her bathers are two-piece, they’re much more modest than the bikinis you buy for Barbie today! I guess it wouldn’t be appropriate for a five year old to be playing with a doll in a bikini back then? 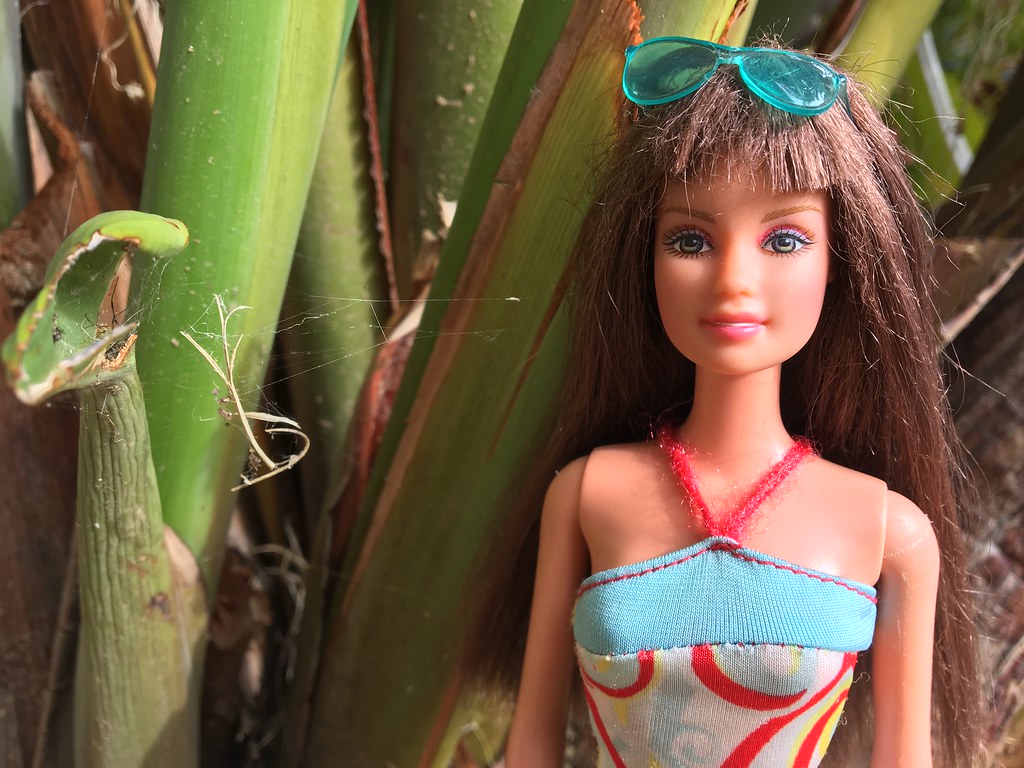 I really don’t like the Teresa facemould all that much -it seems like she’s staring blankly into nothing. No wonder she was portrayed as such a ditz in LitD! 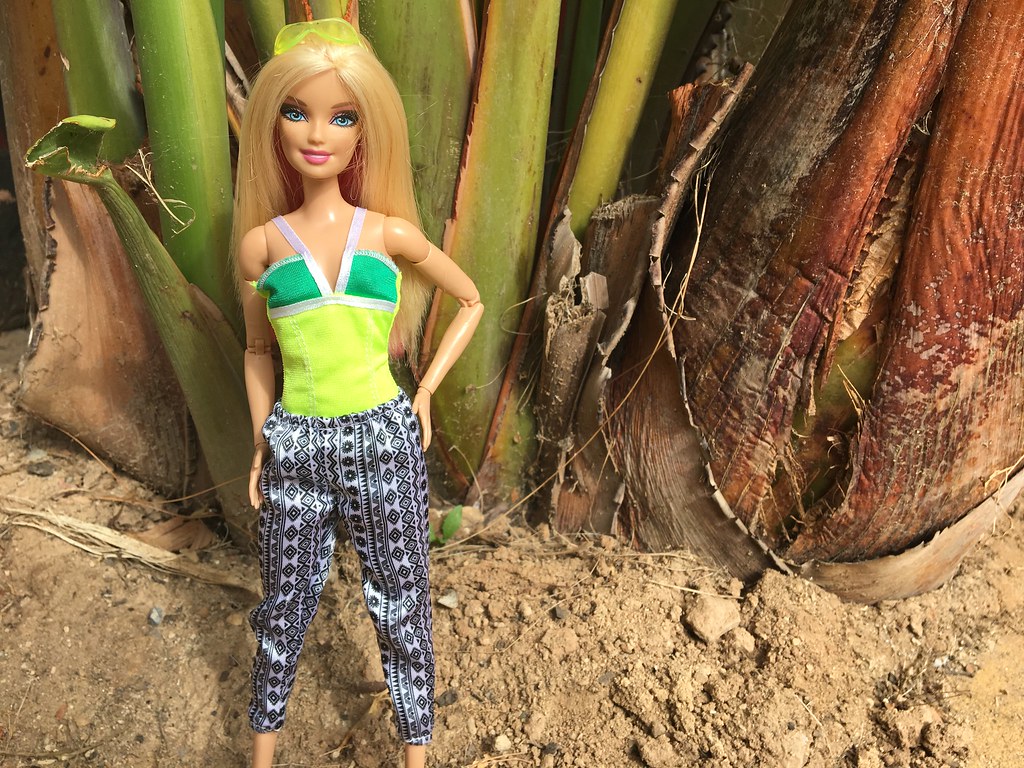 Here’s Barbie modelling the Barbie Style Resort Summer outfit. I called the Summer doll ‘Zoey’ and she was featured in a few photostories, a long time ago.

Although I liked it when I bought it, I don’t think the pants and the bathers go together very well now. 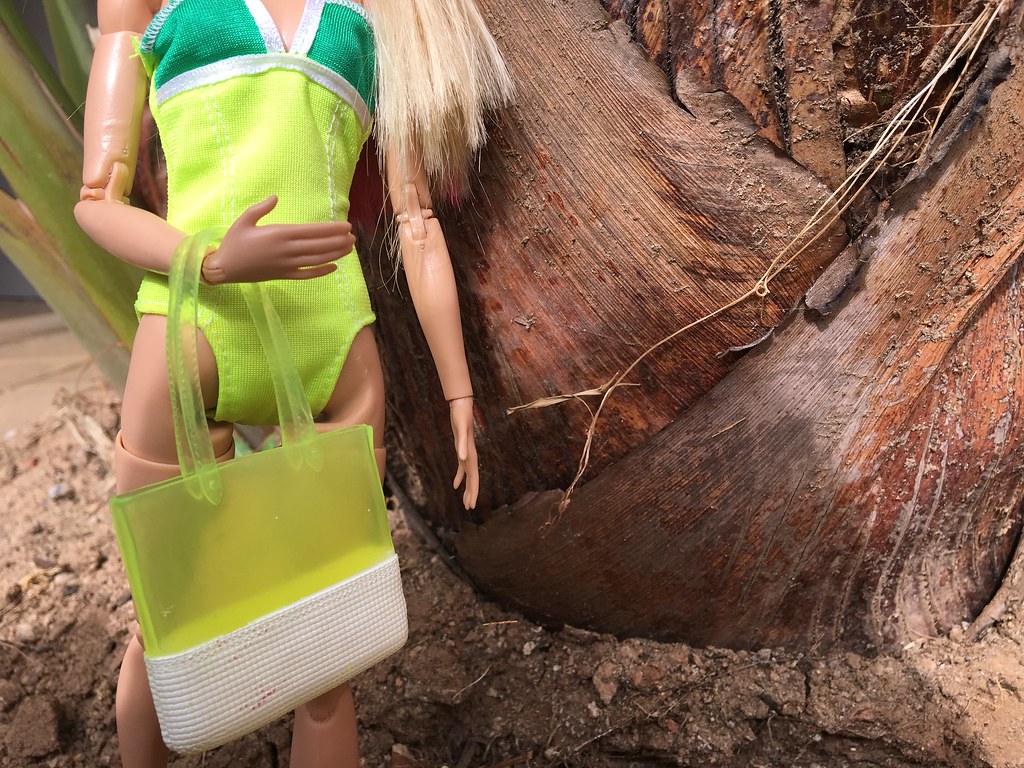 The bag is cute, I really like the white detail on the bottom. You can actually put things inside! 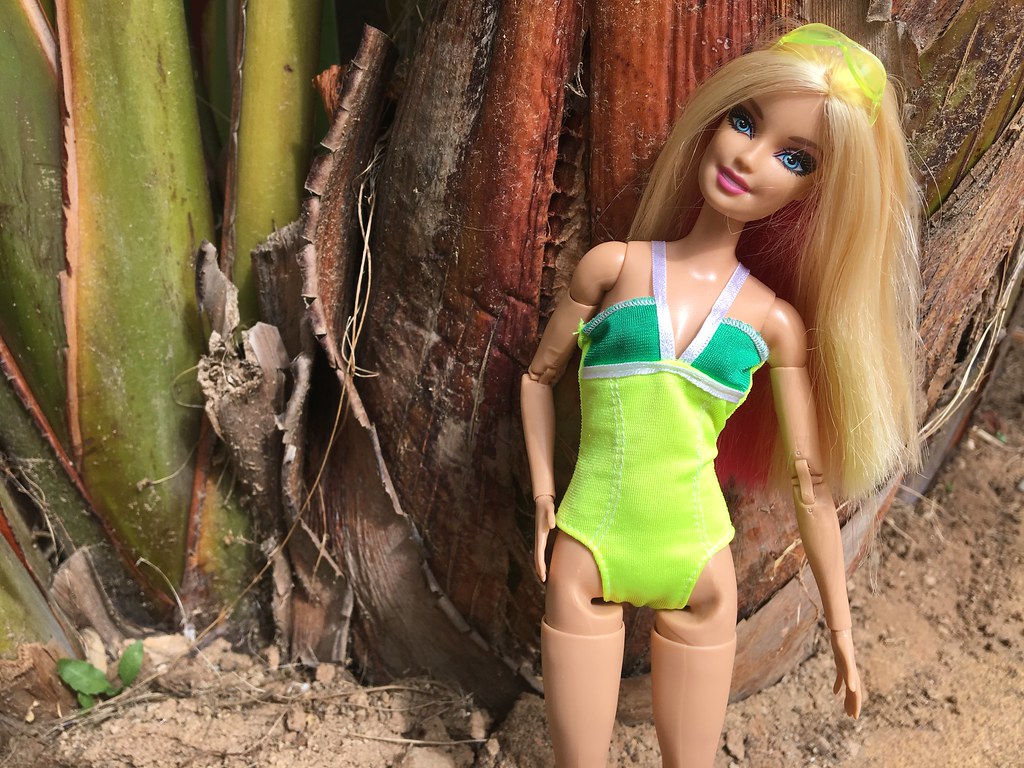 If I could describe the bathers in one word, it would be ‘okay.’ They’re nice, but not, like, that nice? There’s a bit of messed up thread on the left, I can’t remember if it was there when I purchased it. 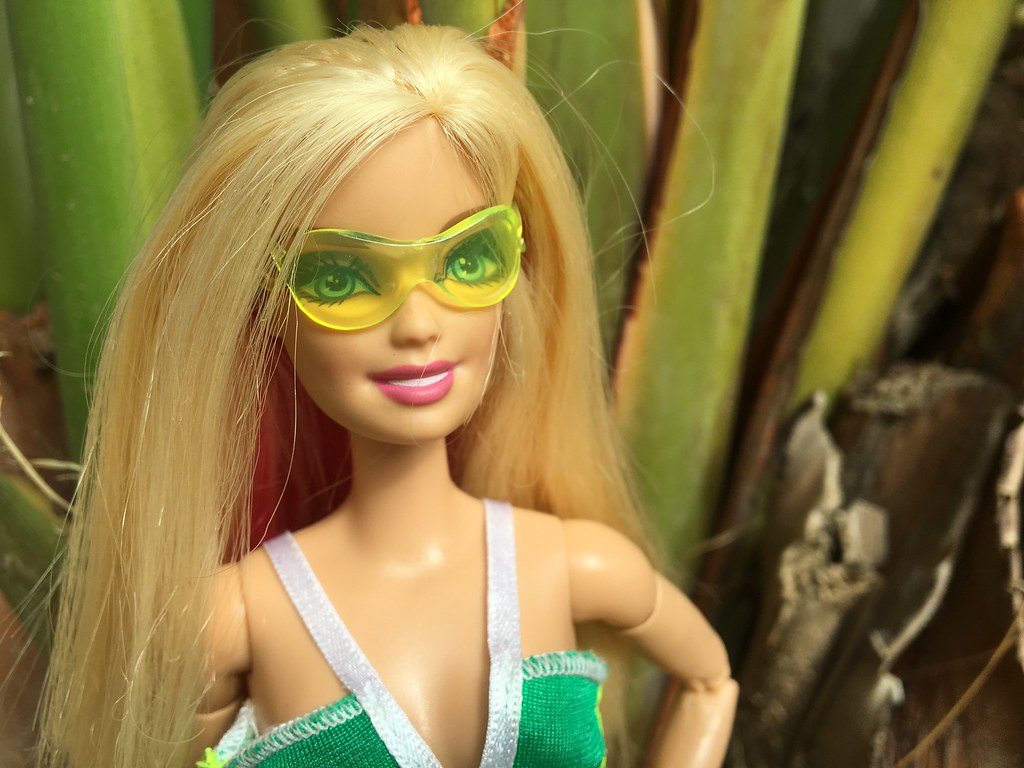 The sunglasses are probably the most awful pair of sunglasses I own. They would be much better suited to going skiing or something! 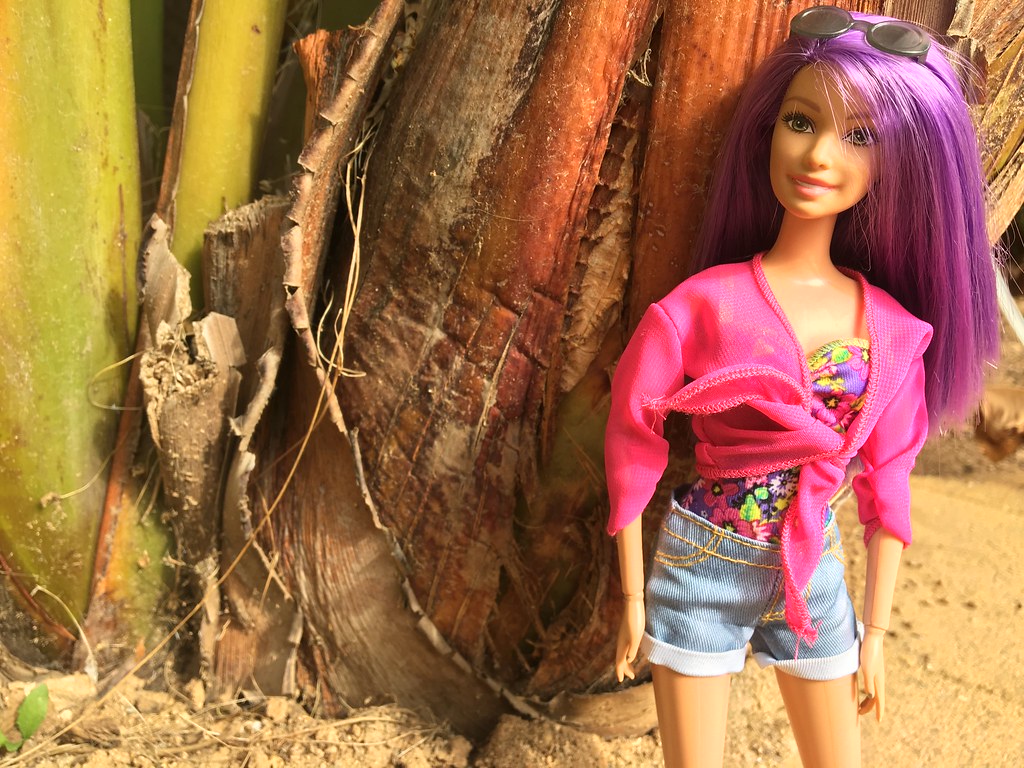 This is Barbie’s outfit, modelled by Danika. It’s my favourite outfit out of the three Barbie Style Resort girls. When I first saw it, back in 2014, I knew I just HAD to have it. I loveloveLOVE the pink jacket, it’s unbelievably cute. 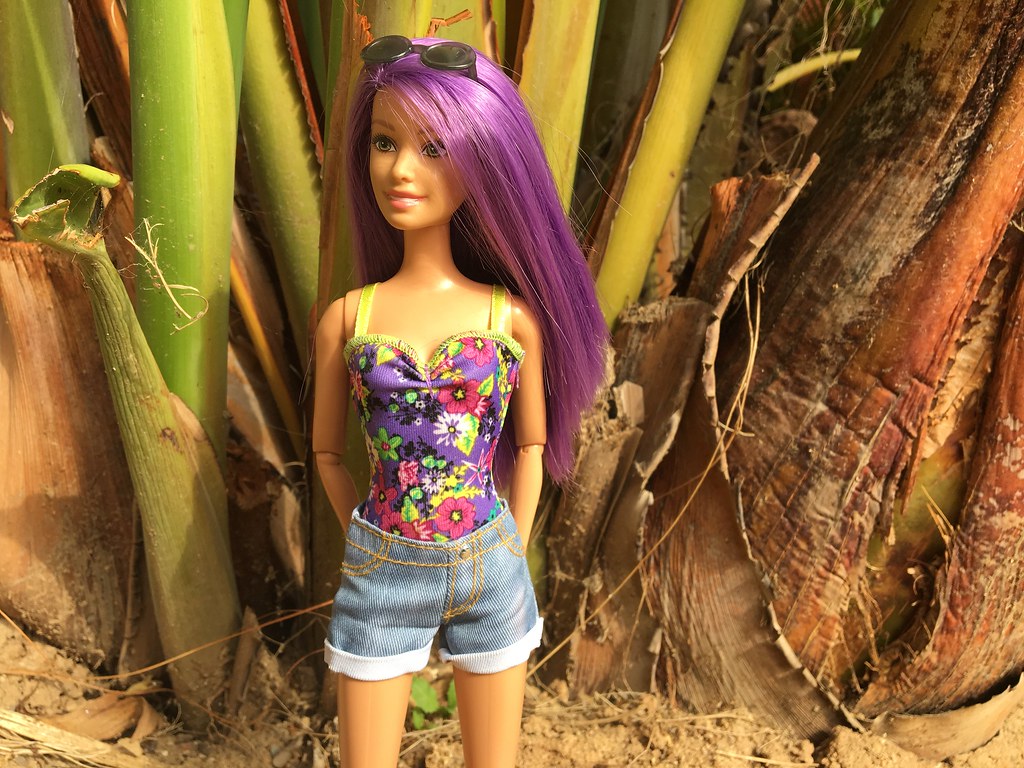 Even without the jacket, you can wear the bathers as a regular top underneath the shorts. Aren’t the shorts great? They go perfectly with any kind of top. 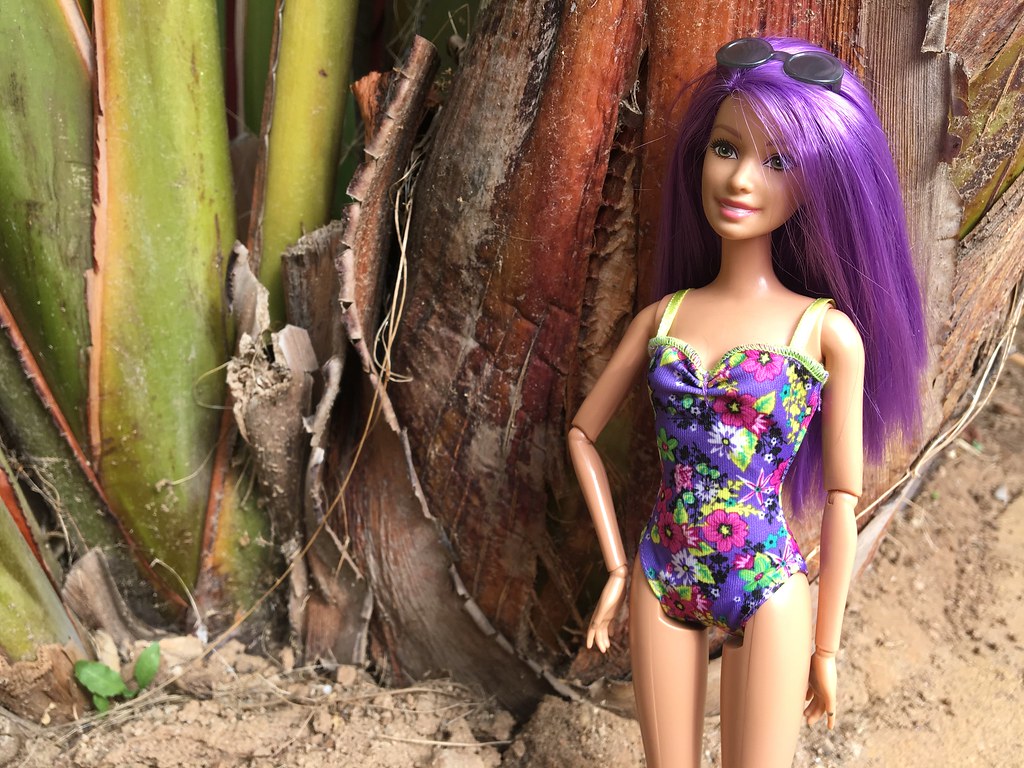 The bathers are the cutest I own! I just love the pattern and style. Aren’t the sunglasses cute, too? I love how they’re circle instead of the regular shape.

On a completely unrelated note, what on Earth is happening with Barbie Live in the Dreamhouse? I expected it to be a reoccurring thing, but it’s been ages since the last episode… I hope they continue with it.

One thought on “Beach Babes #2 -Have Wheels, Will Travel”