Got some cute stuff from Kmart today 😀 There wasn’t anything new, apart from Tamika. I was really hoping for a three-outfit pack, or a new Fashionista. Or for the M2M Skateboarder to go on sale (but it’s a bit early for that, I know).

Club Chelsea Tamika was $10 (nearly the same price as a full-sized Barbie! Hmm, annoying), and both dresses were $8 each.

I couldn’t work out whether these dresses were from 2016 or 2017. And I did look! All the way to the end of the first page of Google Images’ search results, actually. I’ll say 2017, since that’s when I bought them. 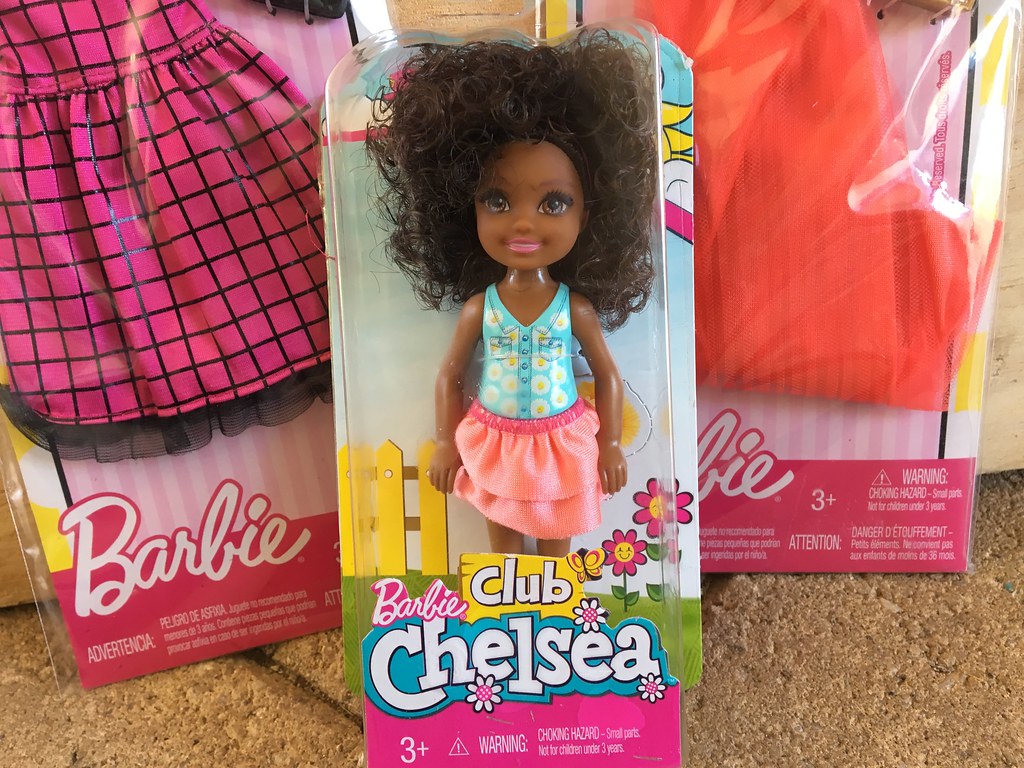 Here she is! She was the only one in the store. As you can see, I also got the two dresses I’ve had my eye on for a while. The packaging said it fits all body types, which I was concerned about, but more on that later… 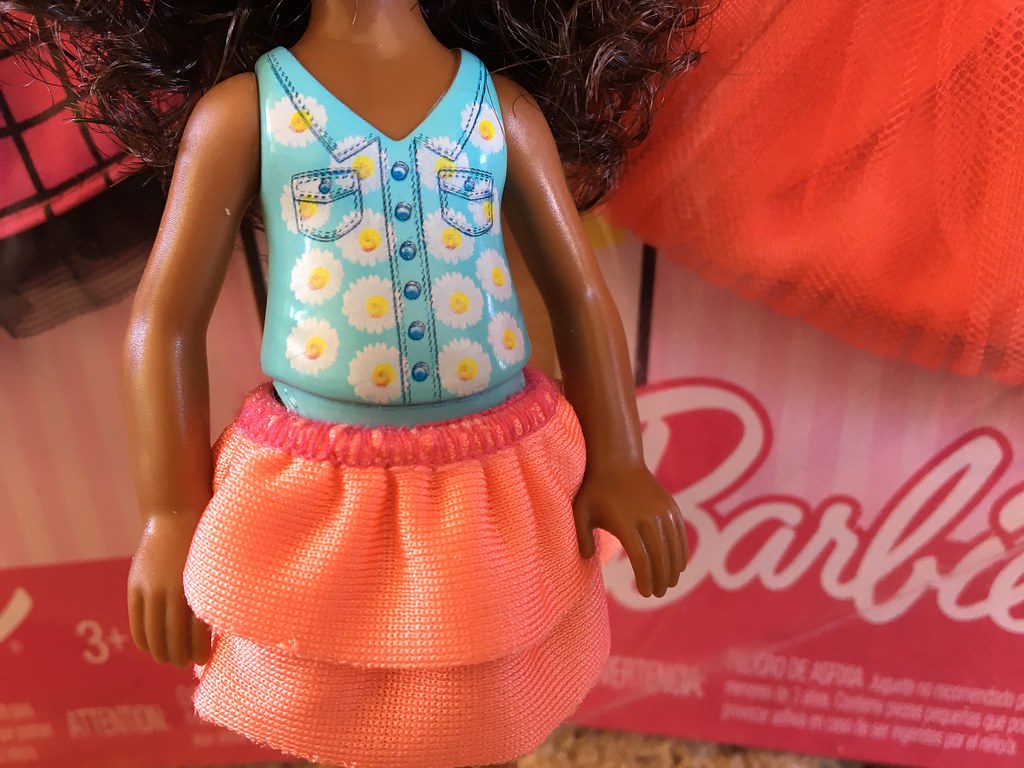 Her top is painted on. It’s cute enough, but let’s be real -fabric would be so much nicer. Her skirt, on the other hand, is a really nice peachy colour. It’s perfect for a birthday party!

Her shoes are very strange, like little clogs or something.

Annd then I discovered something Very Bad. Her eyelashes are smudged! And there’s a big ol’ mark on her forehead! Darn it. I wish I had noticed this at the shops, but in truth, there was only one, so I would have had to get it anyway. 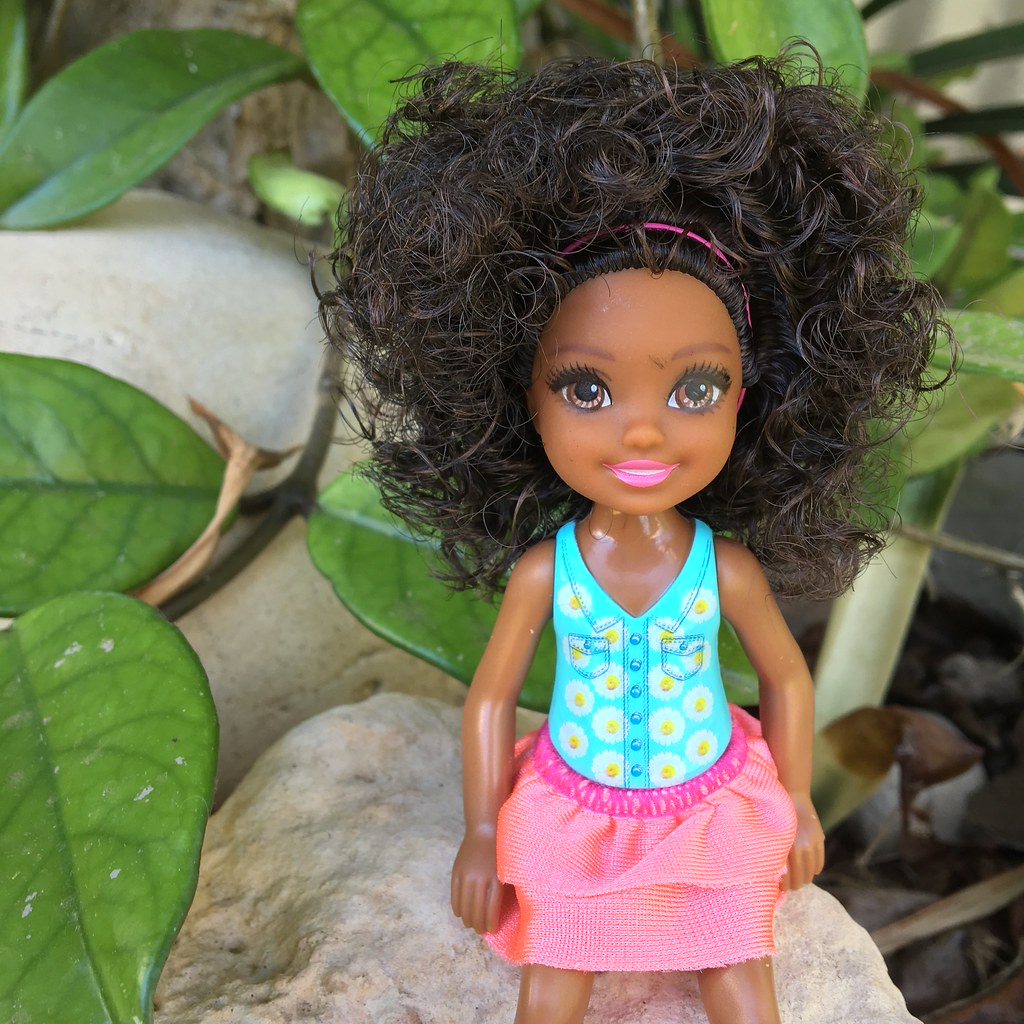 So cute! XD I will try nail polish remover to get rid of the stain later on, but I’m not too sure it’ll work, since it’s been stuck there for months, probably.

I’m really pleased I got my hands on this girl -now Chelsea has two friends to play with! It’ll be good for Delia, too, since now she won’t be the only new girl in the neighbourhood.

Now I can try more kid-focused photostories; sleepovers, trips to the park, school days, there’s so much fun to be had! Now that Imogen’s childcare centre is open, there’s a place for them to meet more often, too. 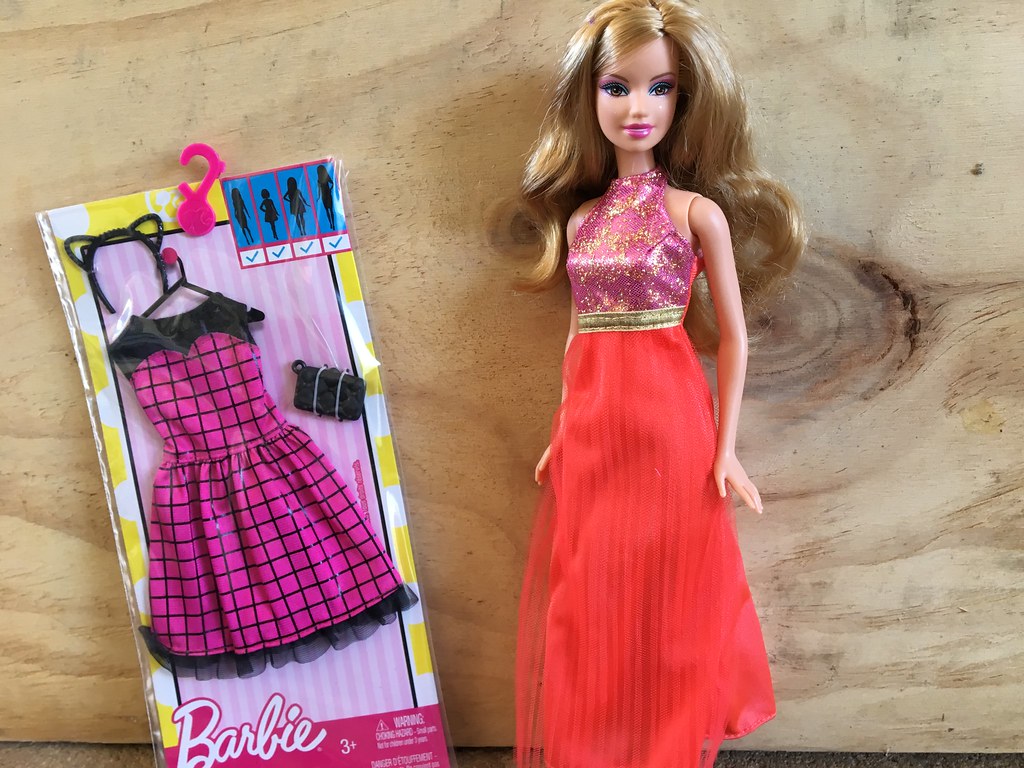 Here’s 2011 PCS Graduation Delancy modelling the new long dress (my favourite). It’s really glittery -it got all over my fingers! All the other times I saw this, I didn’t get it because I thought ‘oh, it’s pretty, but my dolls don’t really go to formal stuff.’ But you know what? Maybe they need to start attending more formal events. 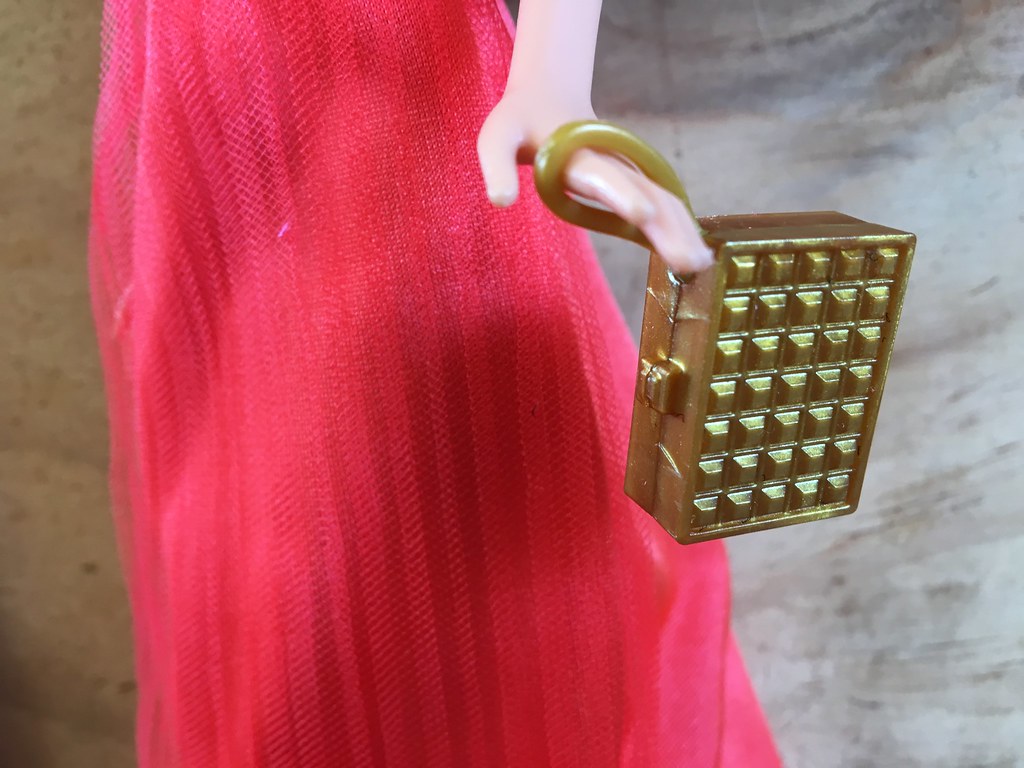 The purse is kind of ‘whatever.’ It’s cute (and gold, which is a plus), but overall it’s not that functional. 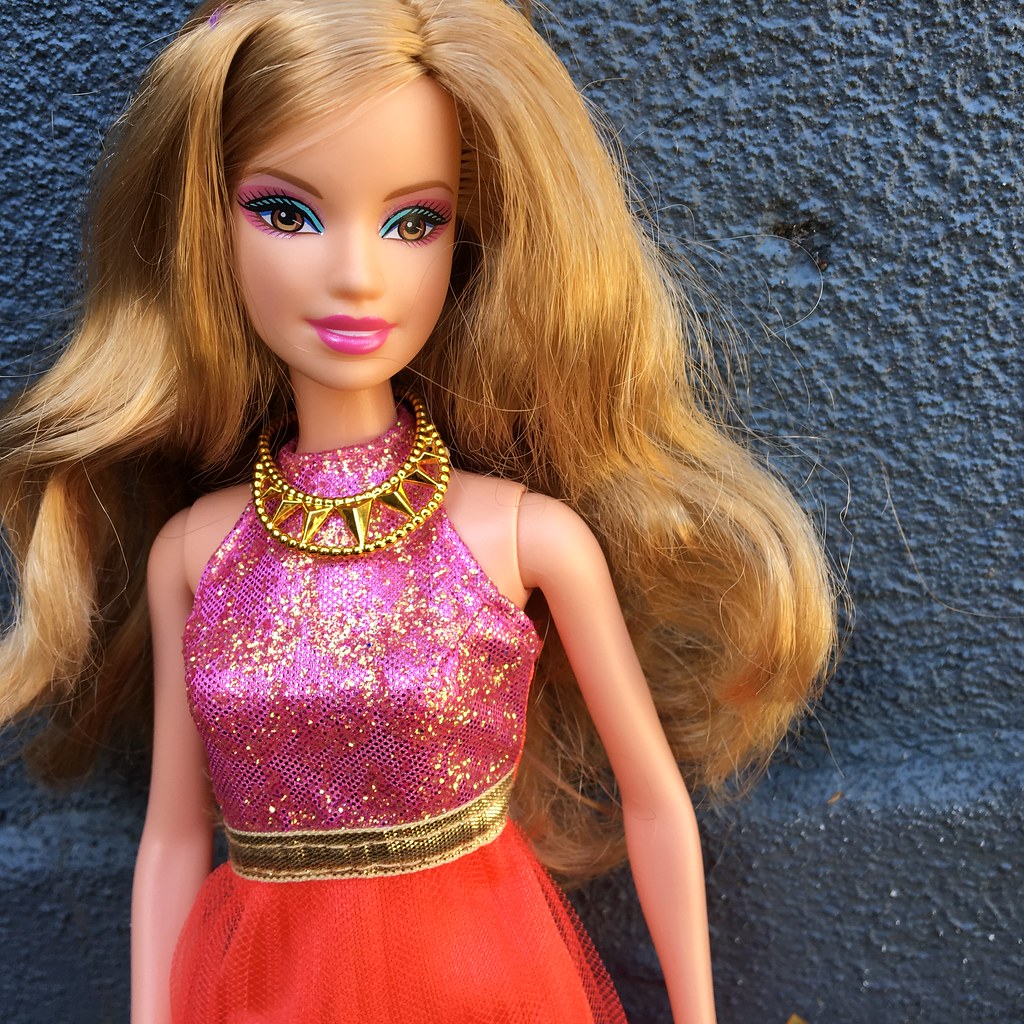 I looove this dress with Delancy’s makeup, it goes so nicely together! 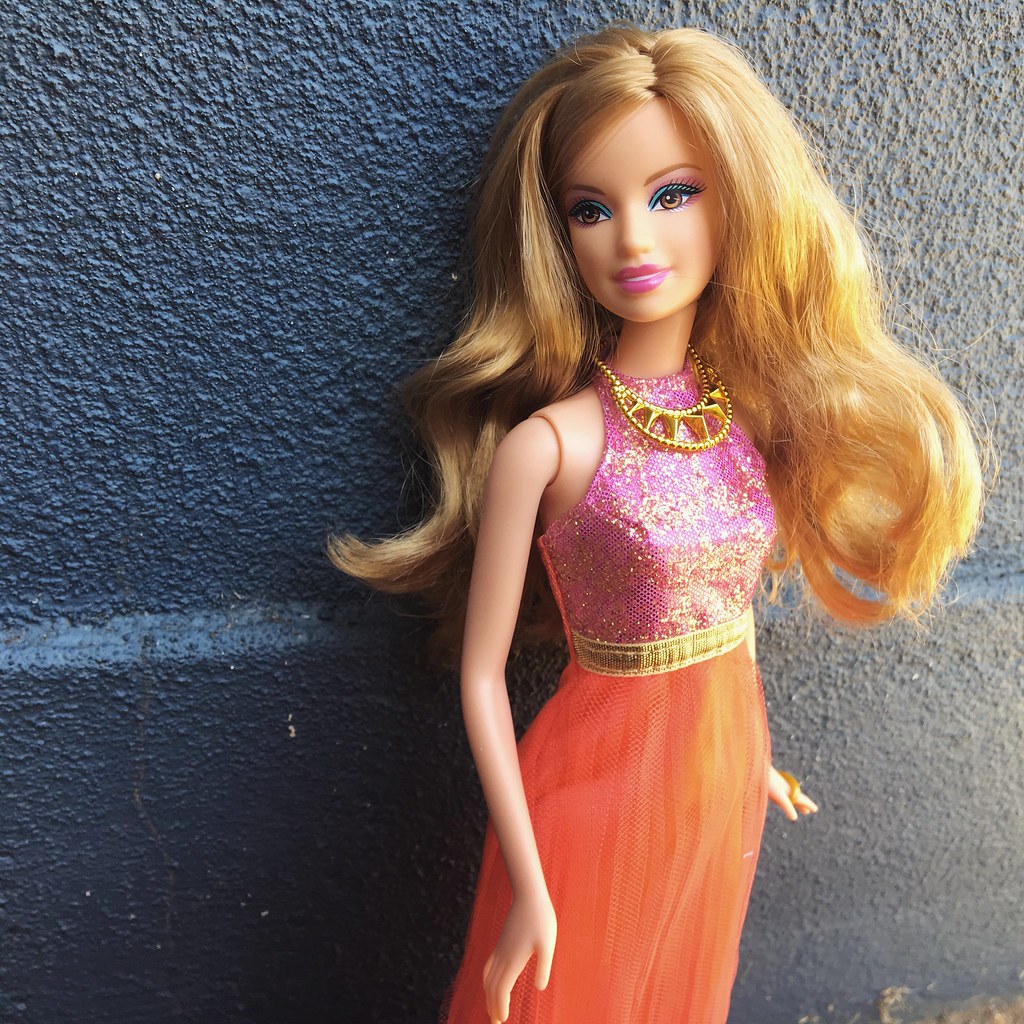 It really is stunning. The glittery pink part goes all the way around to the back of the neck, but the other part does not continue.

Do I regret buying this dress, even though it’s formal? No. It’s stunning. Too stunning to pass up. 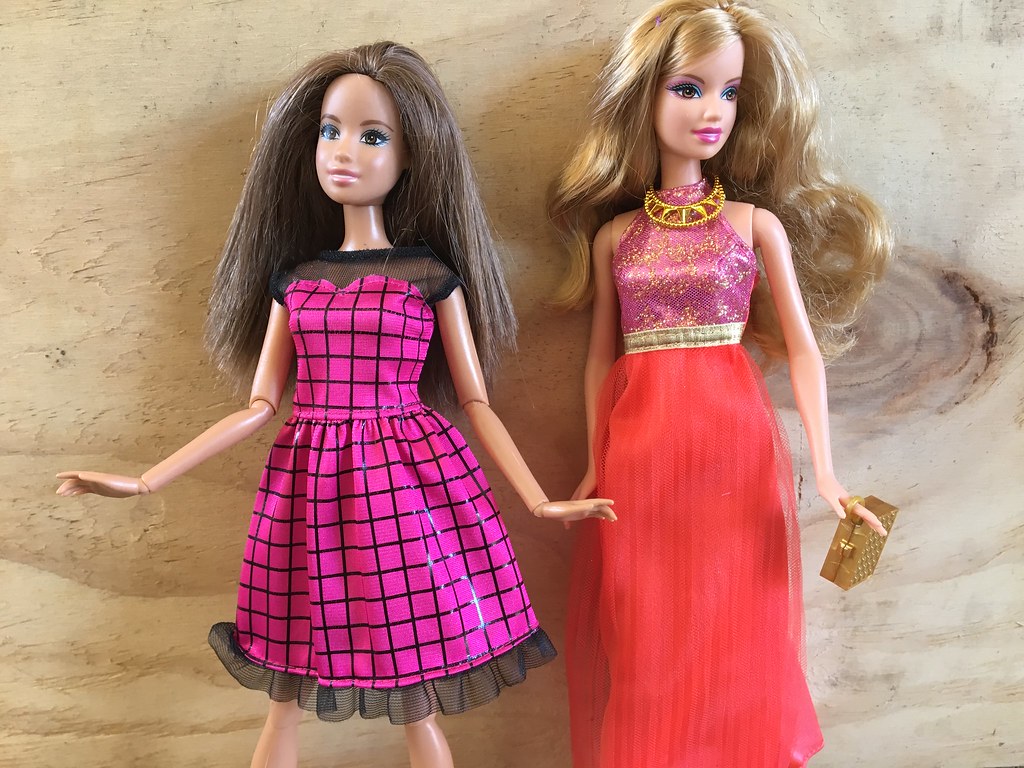 And here’s Emily modelling the other dress. It’s not what I expected, and I think the skirt looks not-quite-right.

I was hoping for something casual, that the girls can wear to school, or to the mall, but this is fancier than it looked in the packaging. 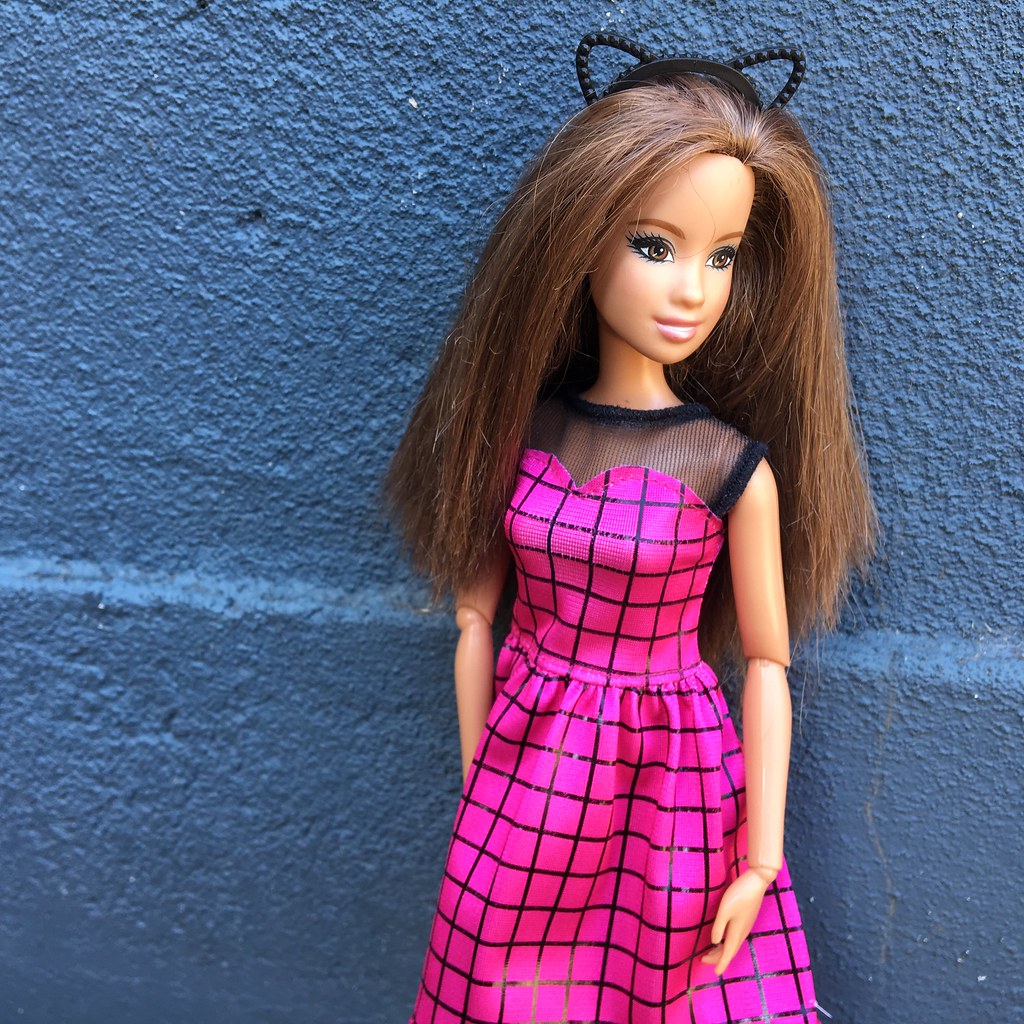 Because the dress ‘fits all body types,’ there’s extra material around the waist. Funny, because this didn’t occur with the longer dress. I’m not really a fan of this, as my dolls are only petite and standard size, and I prefer my dresses to be tight-fitting. On dolls, at least!

But I can see why they implemented this, and I’m sure it’ll come in handy to others. 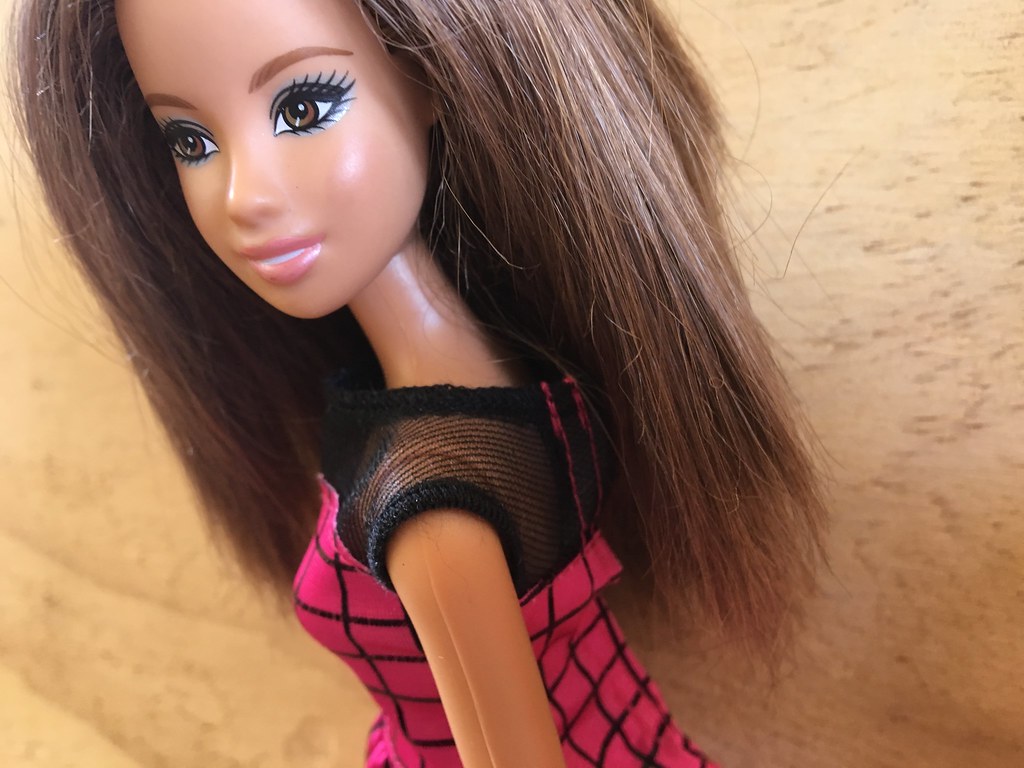 The pattern goes all the way to the back (WIN!) and the mesh at the top looks really neat. 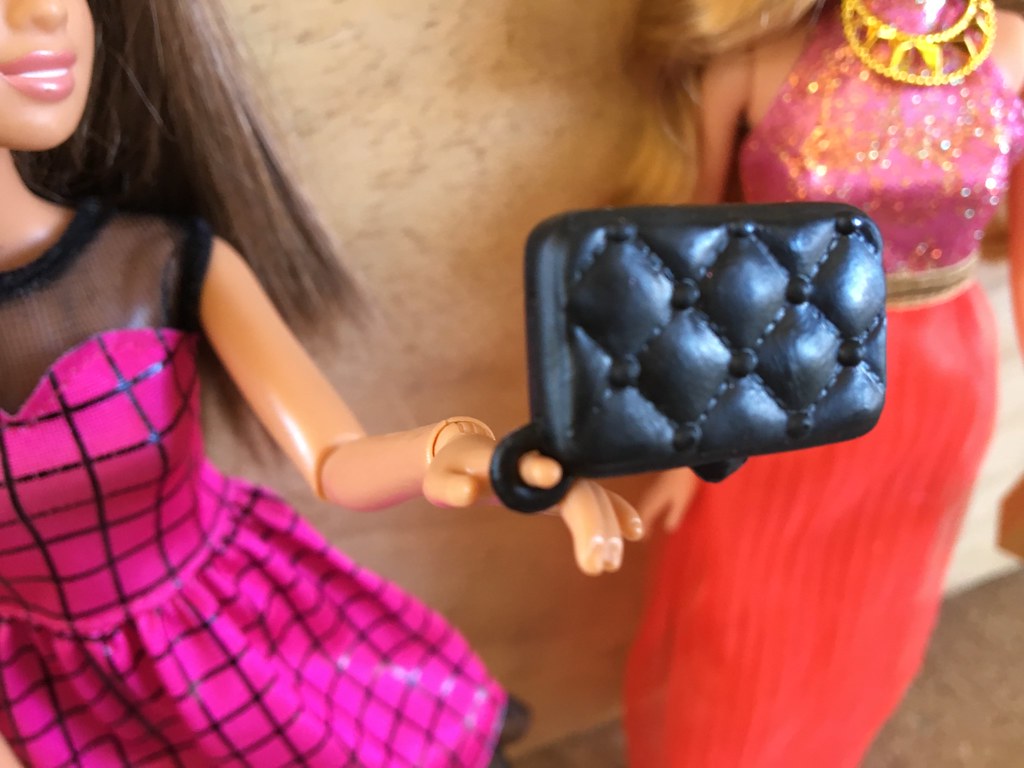 The purse, on the other hand, is a trainwreck. The design is cute enough, but why is there room for just one finger? Really, was it that hard to make it into a wrist strap? 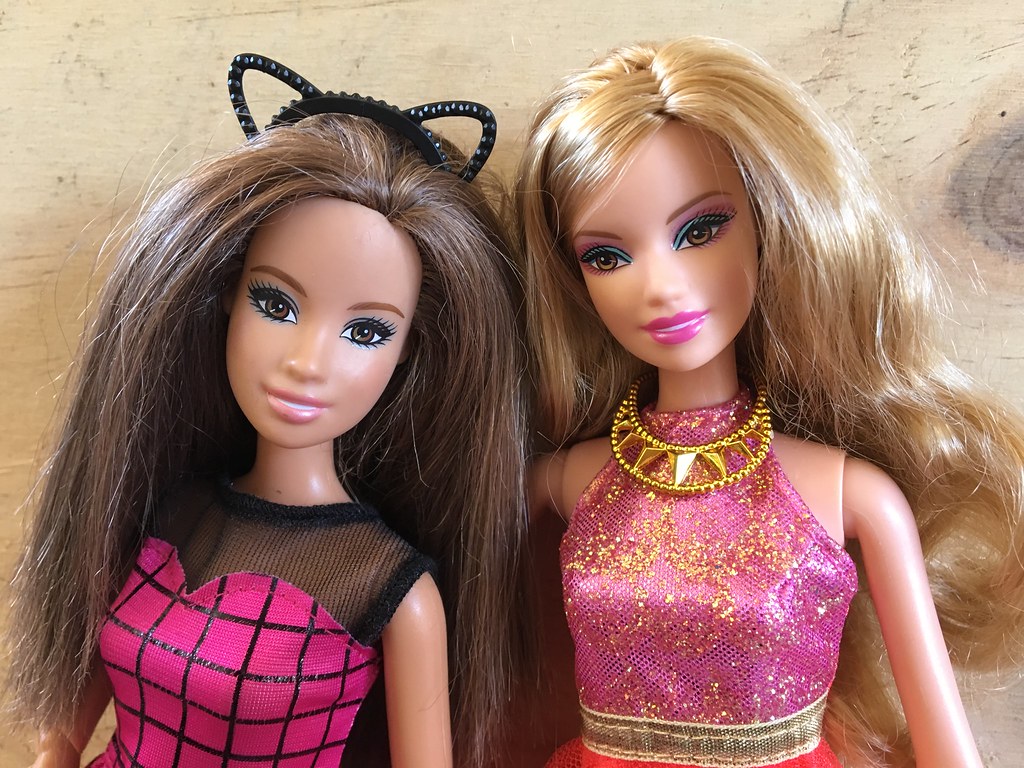 The cat ears are super-cute, and I’ve been wanting a pair for ages. 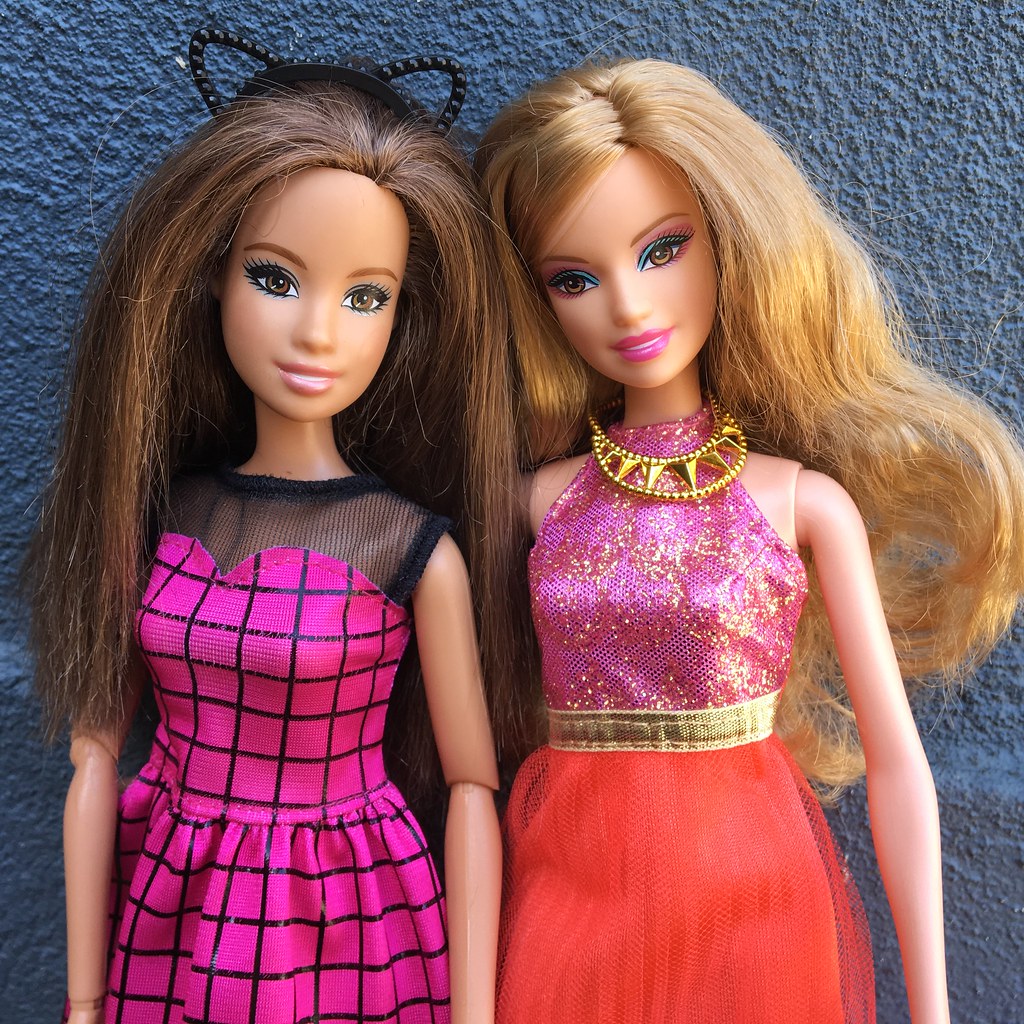 Another shot of the girls together.

Overall, do I regret spending $26 on Barbie when I strictly promised myself NO MORE BARBIE?

Well, no, actually. New clothes is always nice, and Tamika isn’t just another Fashionista doll, she will soon have a proper role in the photostories.

This new stuff rocks, I am very happy. If only Animal Crossing would hurry up and release on the Switch.