Presenting, I Can Be… President ‘Amalia’ and I Can Be… Barbie as Replacement Netball Star. 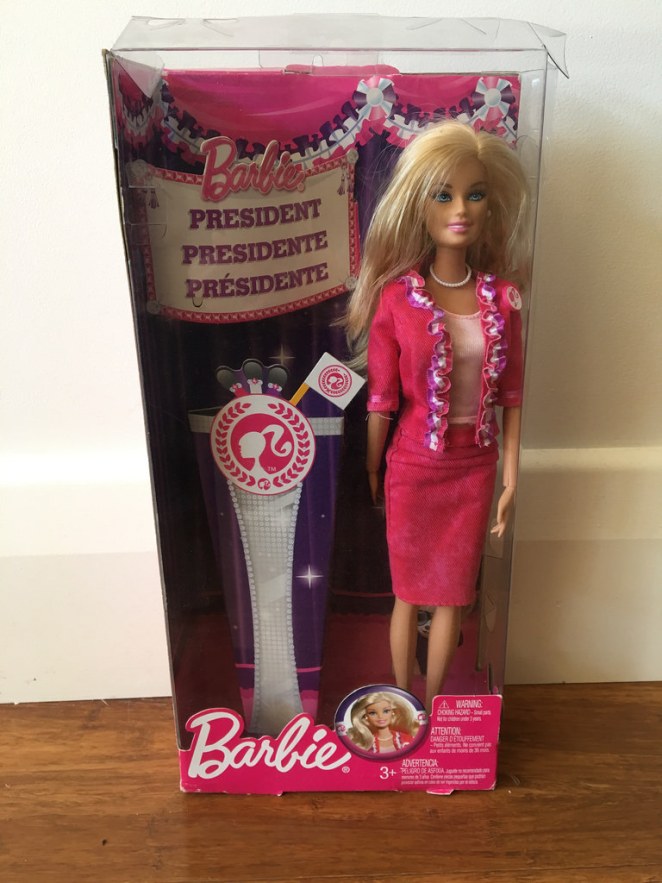 If you compare Amalia’s hair to the picture on the box, it looks completely different! Maybe all her curls fell out, leaving the gel behind. I think the podium is such a cute idea -it would have been even better if the doll could actually stand behind it, though.

As you can see, the box has been damaged. It was originally $24, but since her hair was all messed up, the box was open and the cardboard had ripped, the store sold it to me for $12. What a good deal! Those faults didn’t matter to me very much.

I like the design of the box, but it would have been cute to include a little booklet, similar to the President PDF available on the old Barbie website. I don’t have it anymore, but it included ways you could ‘B inspired,’ ‘B a leader’ and ‘B involved.’ It included suggestions like helping others, saving the environment, being confident, etc. There were also ‘Barbie For President’ badges you could print off and wear. Cute!

She’s a quality doll, minus the hair -which is greasy and disgusting. But her clothes are well-made, the box is nicely designed and it’s rare for a playline doll to come with a ‘pearl’ necklace and earrings like that. Her face is nothing out of the ordinary, but pretty regardless.

Amalia stands on her own. I think the security dog decreases the authenticity of Barbie’s presidential campaign.

I Can Be… A Netball Star was released exclusively in Australia and New Zealand in 2013. She cost around $20, but I got the outfit and accessories second-hand. No doll or box, unfortunately. I have put Barbie in the outfit to model.

I really like the bag -such detail! It opens, but not very far. I can imagine tiny pieces getting stuck in there. The shoes are also very detailed (so realistic!), and the trophy has a cute design.

In all honesty, I don’t think a netball doll was a very good choice. If I was a child that played netball, sure it would be a nice gift idea from some random relative, but apart from the ‘wow-barbie-is-just-like-me!’ element, there aren’t many play ideas. Netball is a team sport and even if Barbie had a team of netball friends, it wouldn’t be very much fun to recreate a game. Not to mention, buying a whole team @ $24 each would be absurd!

I think the type of ‘sport’ dolls that work best are the individual sports. Think gymnastics, ice skating, scuba diving, swimming, dance, etc. Sports like karate, golf and tennis are okay, too -you don’t need a whole team for those!